Adds five maps and a gun. 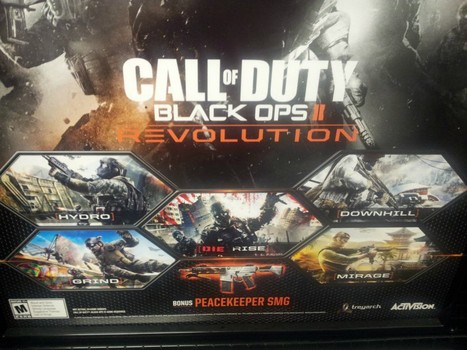 A promotional image for Call of Duty: Black Ops 2 has been leaked, and it looks like a new DLC is headed our way. The promotional image shows that the DLC will be called Revolution and will contain 5 maps and an added weapon. Four of these maps will be for the multiplayer while one is used in the zombies mode.

Examiner reports that Mirage will likely be set in Chine since we can see large Pagoda-style buildings in the background in the image posted above. Downhill is a snow covered map, set in a ski-resort, while Hydro is set on a hydroelectric damn and Grind is set in state park.

The zombie map, Die Rise shows half-ruined, crumbling skyscrapers in the background, portraying a pretty bleak picture, as they should. Hopefully, we’ll be able to enter them.

Like all other CoD DLCs, this should cost $15 (1200 Microsoft Points) and release first on Xbox Live, followed a few weeks later by the PS3 and PC. Of course, none of that is officially announced- hell, this DLC isn’t even announced yet- and this is all just speculation and conjecture.

We don’t know yet if this will be released for the Wii U.