Does Block N Load build upon the shoulders of giants?

Block N Load is an all new online first person shooter video game with Minecraft-esque building from the UK Indie development and publishing team, Jagex. If the name stirs the dregs of your mind, then that’s because you probably remember their exceptionally popular MMO title, Runescape, which remains steeped in nostalgia even to this day.

With that being said, I doubt that future generations will look back fondly with a twinkle in their eye and ask, “Do you remember Block N Load?” Developed in the Unity engine, the most popular and apt description of Block N Load is that the game is effectively just a mix of Minecraft and Team Fortress 2. But that’s not quite right, Block N Load feels more like the leftover remains of a head on collision involving Minecraft and Team Fortress 2 assets on an autobahn. Messy and scattered.

The general idea of Block N Load is two teams of five players duke it out in arenas constructed out of blocks, fighting for dominance whilst trying to destroy the other teams’ Cube, which is literally just a big cube. There are other game modes, but they’re all very run of the mill. 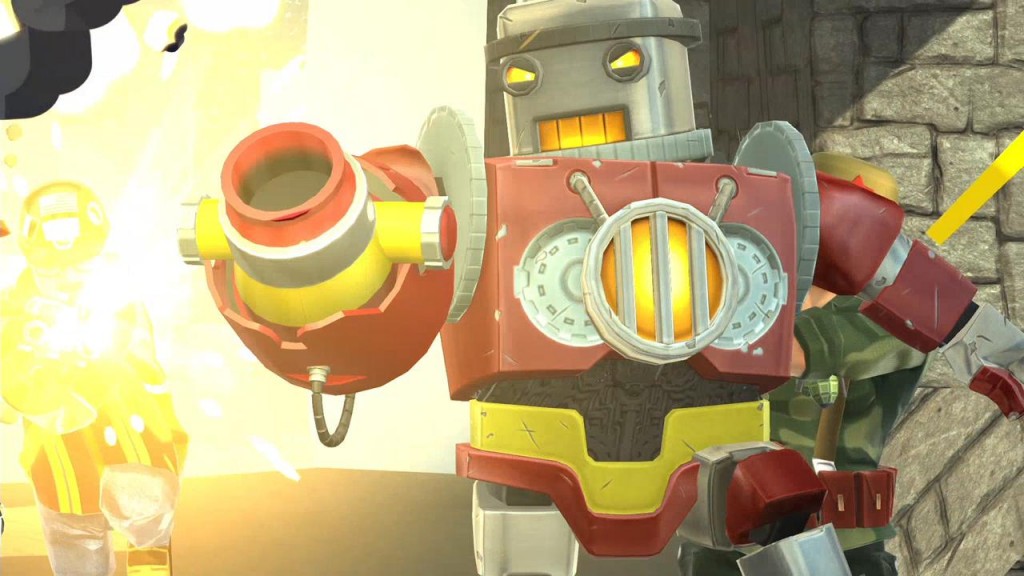 "You’re encouraged to build defenses for your team, dig pit fall traps lined with turrets, trench lines (that only serve to leave you open to headshots or trap you with explosives) and help out by deploying teleporters, but as mentioned above, nobody seems to care about these options and most would rather run on ahead and go solo."

One of the main aspects of the game seems to be the one thing that nobody cares about, and I found myself ignoring it too, the building mechanics. Each player in the game has a set of block types that they can place in the world by building them, they allow the construction of staircases and bridges, walls and the like. They even include special blocks, like team assisting turrets, useful bounce pads for reaching hard to reach areas, bombs and teleportation devices etc.

You would think these would be put to good use, but when the other players are more interested in fragging your entire team, then the focus on building quickly fades away and is replaced with gunplay.

You’re encouraged to build defenses for your team, dig pit fall traps lined with turrets, trench lines (that only serve to leave you open to headshots or trap you with explosives) and help out by deploying teleporters, but as mentioned above, nobody seems to care about these options and most would rather run on ahead and go solo.

The above mentioned building mechanics are all functional and do exactly what it says on the tin, but it just feels like so much unneeded chaff. Had building been incorporated into the game at a more fundamentally core level, like actually needing to construct your base to protect your cube, then it may have worked better and forced players down a more cooperative path, but as it stands, it’s fairly uninspired. 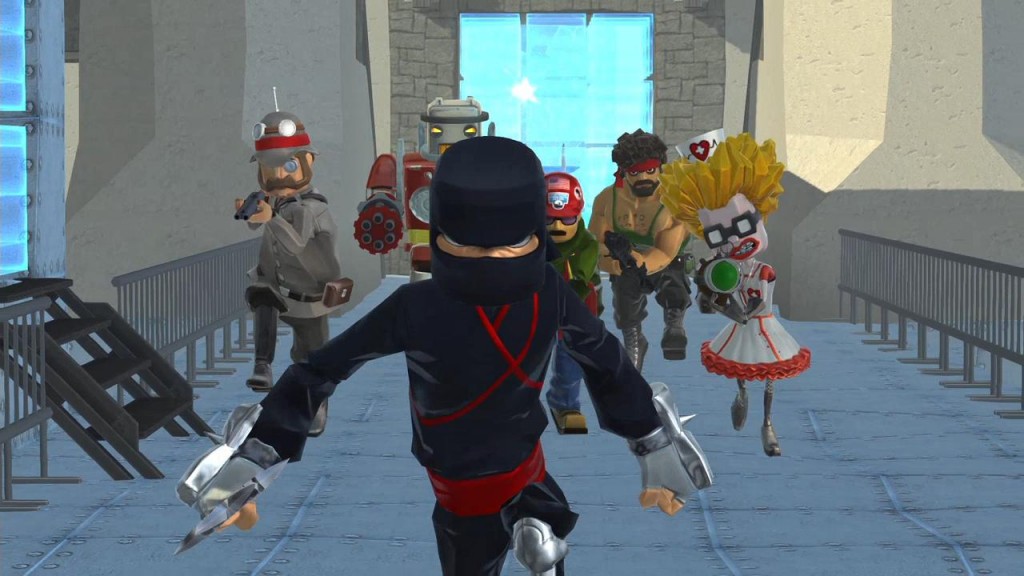 "Visually, I quite like the game's overall aesthetic. Unlike so many other games on the market at the minute, it’s packed with the colour and charm that seems to remain exclusive to the independent developer scene."

Players are asked to choose between one of six pre built classes of Hero. This is where the Team Fortress 2 comparisons come into play. There’s Sarge Stone, Juan Shinobi, Nigel Purdy-Longshott, Antony Tony Turretto (my personal favourite name in the game), Cogwheel and Doc Eliza Doolally. Each character’s name reflects their in-game attributes, with Mr Longshoot unsurprisingly rocking a sniper rifle and Sarge Stone carrying the machine guns and rocket launcher. Not that there’s anything wrong with that, it’s just not very original.

Visually, I quite like the game’s overall aesthetic. Unlike so many other games on the market at the minute, it’s packed with the colour and charm that seems to remain exclusive to the independent developer scene. All the weapons have a certain bulk to them that makes it all feel somewhat cartoonish whilst retaining the feel of, “Yep, that’s definitely a gun.” The most visually striking members of the cast would definitely be Cogwheel and Doc Eliza Doolally, both of which are vibrant and enjoyable characters.

From a sound design point of view, there’s nothing particularly remarkable, nor is there anything particularly bad. Despite the odd stuttering of sound effects or overlaying of sounds that meld into a cacophony of indecipherable noise, everything sounds as you would expect it to. Nice and cartoony, but clearly distinguishable as what it’s supposed to be. 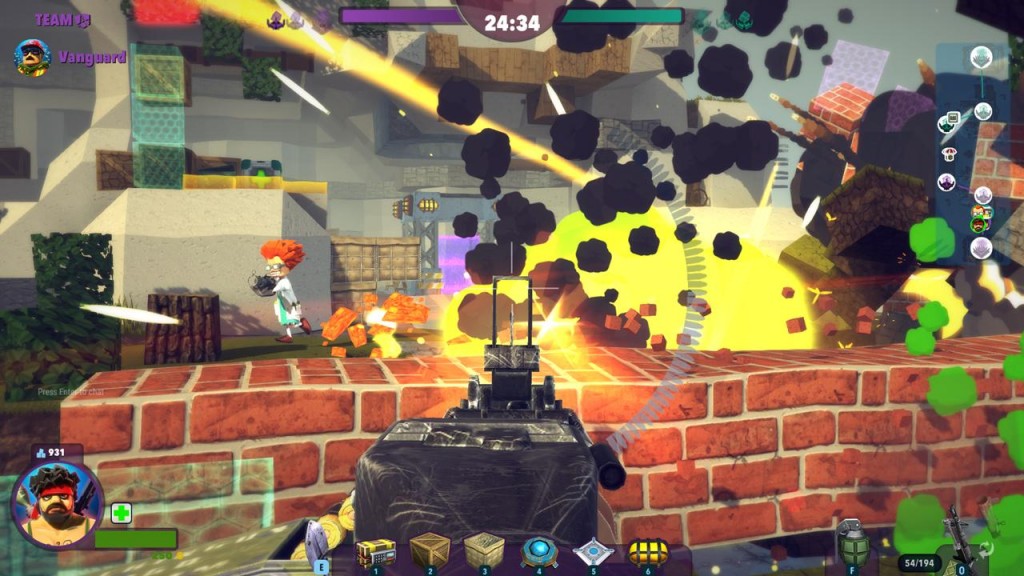 Control wise, things get a little bit messy. Like everything else mentioned above, it works, but it just doesn’t work too well. In general, the controls feel far too floaty and out of synch with the gameplay. For a first person shooter, the relationship between player input and character reaction is key, but Block N Load feels as though every movement is a DOOM-era rocket skip. Precision platforming goes out the window if you try to sprint and the strange, “hold shift and tap forward” to mantle mechanic, if you can call it that, results in more jumps into the void than it does successful climbs. Beyond that, the control scheme is fairly normal, which is a good thing.

With all things being considered, Block N Load isn’t an overtly offensive game. It’s a mostly functional, colourful and somewhat enjoyable first person shooter mired by its flaws. The fun comes in short waves amid staggeringly deep valleys of repetition and paint by numbers gameplay that has been done better elsewhere. Ironically, Block N Load feels like a underwhelming sequel to a previous Jagex game, Ace of Spades which was, you guessed it, a first person shooter with building mechanics and a PvP focus. Fancy that.

The overall visual style of the game can be quite charming in its own way and the block building aspect of the game might be put to good use if you’re playing with friends that are interested in coordinated gameplay, leaving room for plenty of fun to be had in short doses.

Where Block N Load tries to be its own game, it fails. Gunplay is uninspired, gameplay is bland and the building is really rather boring. That coupled with the fact that the game is a slightly altered remake of a title already put out by Jagex, simply leaves a bad taste in my mouth. Seek out the games that inspired Block N Load and play them instead.

If you’re looking for a player driven, skill based, class operated first person shooter, Block N Load is not the game for you. Team Fortress 2, a game which is free to play in its entirety, does it better in just about every way.

A copy of this game was provided by developer/publisher for review purposes. Click here to know more about our Reviews Policy.
Tagged With: Block N Load, Jagex, pc