Everything you need to know about Blood Bowl 2 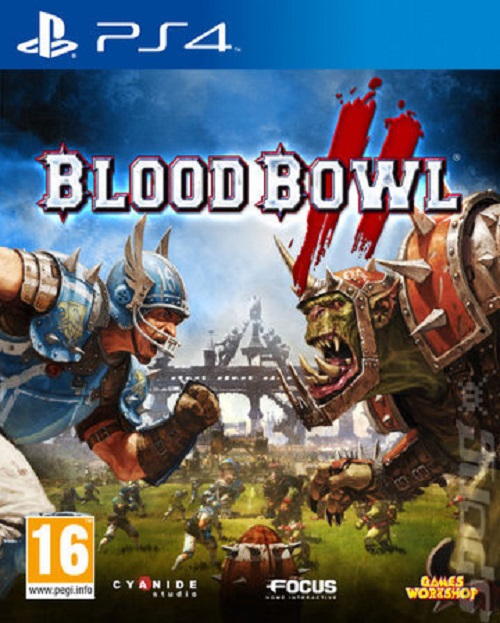 Blood Bowl 2 is an upcoming fantasy American football-inspired video game that is based on a Games Workshop tabletop IP. It’s currently being developed by the French developer, Cyanide, the same studio behind Styx: Master of Shadows, Of Orcs and Men and the original Blood Bowl which launched in 2009.

The game will be published by Focus Home Interactive, the same group that published the original Blood Bowl and the recently released Cities XXL.

Blood Bowl 2 is slated to release in Spring 2015 where it will be made available on the PlayStation 4, Xbox One and PC. A Steam listing has the game set for June. The official site for Blood Bowl also lists a Blood Bowl game for iPad and Android, but this is an unrelated port of the original game.

Like Blood Bowl before it, Blood Bowl 2 is based on a Games Workshop IP that started out as a tabletop fantasy football game.

Unlike the original Blood Bowl, a game that mixed real time gameplay with a turn based mechanic, Blood Bowl 2 will put an emphasis on the turn-based and strategic elements of the game.

Speaking about this, Blood Bowl 2’s Lead Game Designer Gauthier Brunet has said, “Blood Bowl II will not feature a real-time mode. We have made this choice to focus on the turn-based gameplay as much as possible and bring a polished and updated version of it.”

Despite having only detailed 2 of the playable races coming to Blood Bowl 2 (see the Teams portion of this Wiki for more) the game will feature eight races that the player can control. This will be expanded on post release, presumably by way of an expansion or DLC. This has been done before with Blood Bowl, with the all content eventually being collected into the Blood Bowl: Chaos Edition.

He later added, “We have much more content to add to the game and we are really thinking about those 15 other teams. We still don’t know how they’re going to get that into the game, whether it’s DLC, expansions or an in-game store… we’ll speak more about this when the decision has been made.”

Expanding on the possibility of races as post-launch content, project manager Sylvain Sechi, has said, “I personally don’t like to milk players, I’m not keen on the extension package retail model, so we are discussing a lot about trying to sell players races individually, which will eventually I think cost much less for players because you don’t play with all races. Each of us we have two, three, four favourite races, some of which will already be in the Blood Bowl 2 original content. We’re still discussing it at this point, I hope we manage to do this one-purchase-per-race stuff.”

The game will be running on a brand new, internally developed engine that currently doesn’t have a name. This engine will have hardware specifications that are “higher than the original Blood Bowl”, but the developer has said that it is taking steps to make the game playable on low-end PCs too.

Blood Bowl 2 will retain its distinct visual style, with the new engine adding to the quality of the graphics, and it will also retain the camera angles that were inspired by actual American football camera placement. This is to make the game look as though it is actually being broadcast by the fictional broadcaster, Cabalvision. Commentary will once again be in place with Jim and Bob back where they belong to bring dry humour and puns to the pitch.

This latest iteration of the Blood Bowl IP will feature a new user interface to bring players “improved visual feedback” that makes them game look more “modern” and “fresher”. Before, players wouldn’t know the outcome of planned moves or the probability of actions until a move was made. Now, these percentages are displayed directly on the field.

A number of other smaller improvements have been made, including improved character animations. 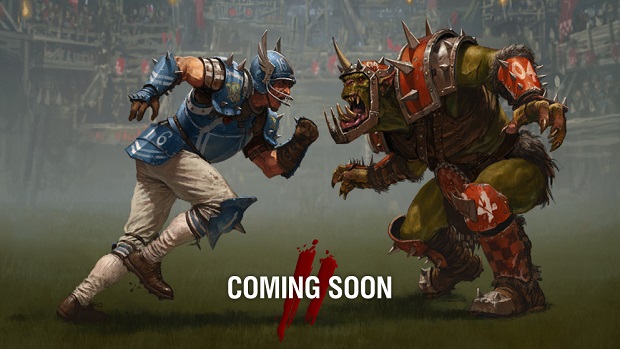 The game won’t feature a traditional story but there will be a  match-based campaign that will have a plot which players can play through.

The campaign will act as a tutorial of sorts for players in the early stages, introducing players to the basics of the gameplay mechanics, but it will also follow the rise of the once mighty team, the Reikland Reavers which is comprised of humans. 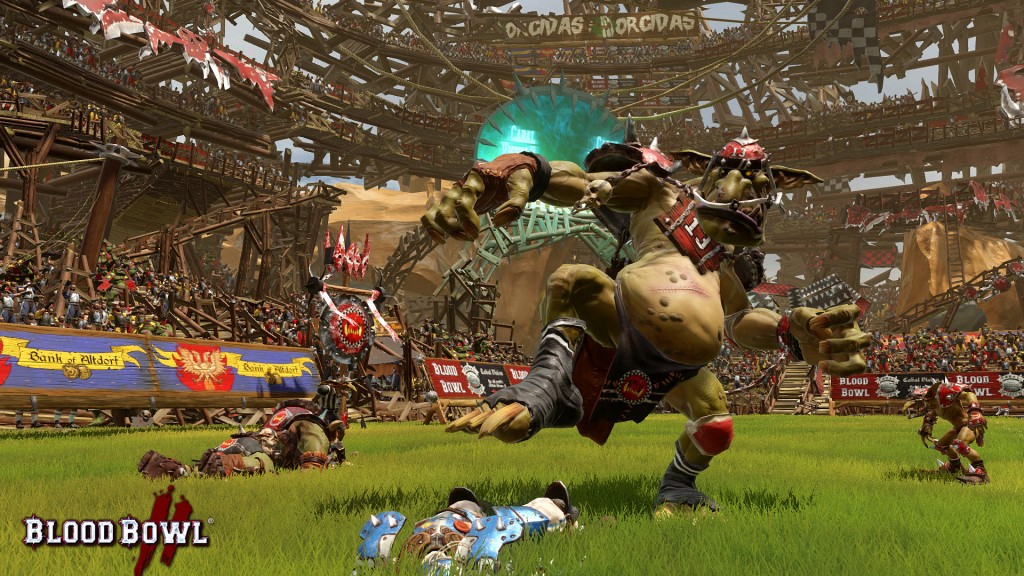 As you would expect, not much has been changed in this iteration of the classic Games Workshop IP brought to life by Cyanide.

The game is now an entirely turn-based affair, with any notion of real-time gameplay having been removed to help bring a focus on the game’s tactical and strategic angles.

The AI has also been given an overhaul. Where it was already punishing, it’s expected to now put up the same amount of resistance as an experienced player. Speaking about this by way of an info panel, Cyanide said, “Each of the eight races has had its own AI engineered to match their personalities, creating a much more dynamic challenge.”

As mentioned above, Blood Bowl 2 will now display the feedback from your moves before you commit to them, helping you to make better informed decisions on the field, or to convince you to try your luck with risky moves. “3D dice-rolls pop much more in Blood Bowl 2, with intuitive player control enabling coaches to make decisions more confidently. Enjoy clearly visible percentages displayed to indicate the success of an action, and useful tooltips,” according to Cyanide

The game will also feature a market place for in-game purchases as well as player customisation for both team jerseys and the stadiums with each of the five base stadiums given room to grow. 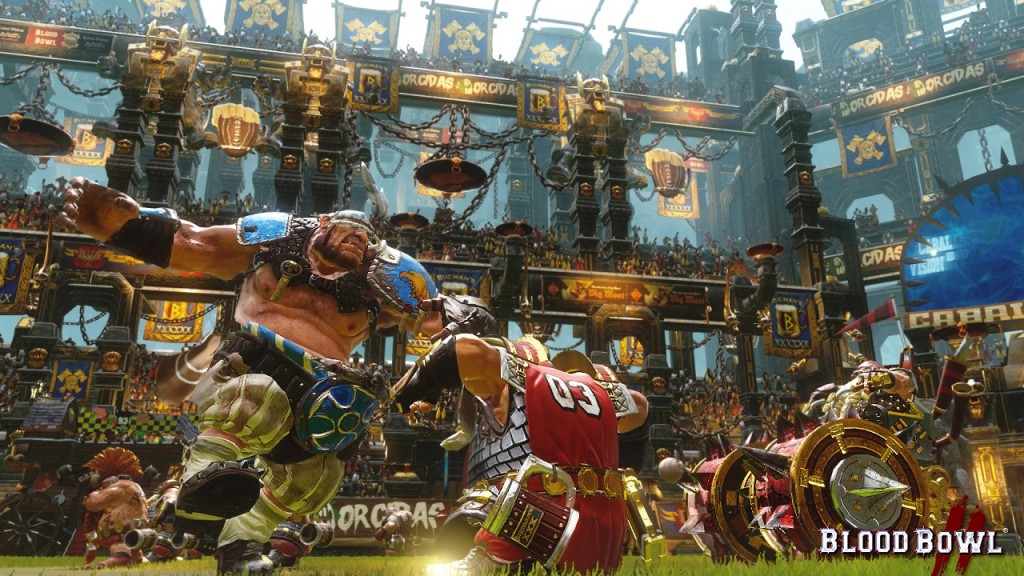 At this time, we know of eight confirmed races with more expected to release further down the line post launch. One of these new teams are the Bretonnian Knights. Despite their name they are in fact not all Knights, with a part of the team being made up of lowly peasants as well.

The current team factions are: