Bloodforge is a hack-and-slash game for Xbox Live, and is quite similar to God of War in a lot of ways. I never expected to see such a game on XBLA mainly due to the fact that this looks much more like a retails title, and yes, if this was priced at $60 and offered with plenty more content, it would have been the worst rated game in existence. 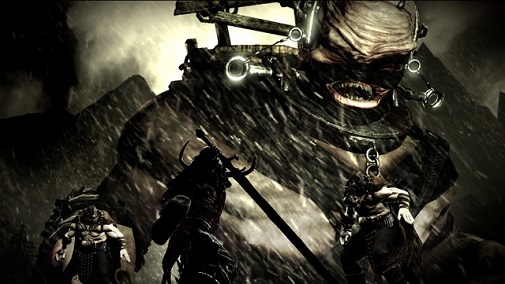 The game tells the story about a warrior named Crom, who just ends up killing his wife and is out to seek revenge on… oh hey, look, I dunno who the villain is. Okay, I do, but that is so cliched and forgettable that I don’t know why developers insist on even attempting to give any sort of back story to, what essentially is, a mindless action game.

There is a lot of action here, however, with gratuitous amounts of blood and an unique but unpleasant visual style. I should probably reveal that this game is built on the Unreal Engine 3, which so many Xbox developers prefer for obvious reasons. This isn’t the best implementation of the engine, considering it kind of reminds me of the darker areas of Medal of Honor which came out few years ago. What I mean by that is, you cannot see things and the poor textures stick out like a sour thumb. 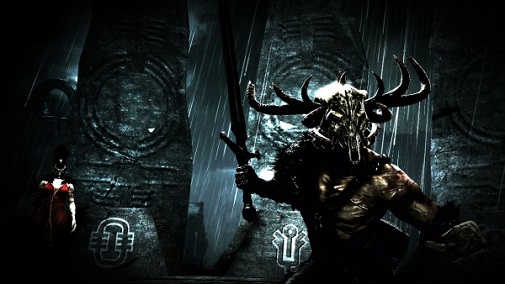 The game starts out gracefully enough, with our protagonist Crom hunting a Deer, and comes home to see his village burning. Enemies have surrounded his home and his wife screams, “helppp me!” Cliched yes, a lot. Then from there, begins the journey of Crom, who has a stylish skeleton helmet and looks quite imposing with a big sword at his disposal.

He has allies in this game – a bird which can transform into a woman (goddess, apparently) and she guides him, on how to become strong to face the end boss. There is a health bar and other things that you normally associate with games such as these, so this isn’t really a surprise. The controls aren’t that smooth for an action game, and the slow camera makes things worse especially when you’re facing a bunch of enemies.

The voice acting isn’t top notch either and is generally cringe worthy. It feels like an afterthought, and I think it probably isn’t right to expect that from this game due to being released as an arcade game. There’s something good about the game though, and that’s the gore factor. Yes, if you love hack-and-slash games, chances are that you also love gore, and this game has a copious amount of it. 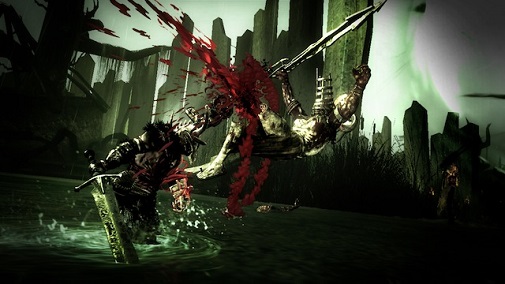 The enemy designs aren’t that well done, but considering the visuals on offer which is mostly dark and gloomy, the enemies don’t stand out compared to other games in its genre, and this is one of the major problems I have with the game. Crom can dodge, and cast magic, along with your usually standard and heavy sword attacks. There’s nothing in the combat mechanics that truly stand out however, it’s just like a low budget action game.

The boss fights aren’t that good either, but you will encounter some mean enemies in the game. I think it depends on what people think of these bosses, but I found them to be generally underwhelming. Ultimately, it’s an arcade game that is available for 1200 MSP, and whether you like it or not, for an action game fan, this game can provide a few hours of fun, so I’ll probably let go of the fact that it is poorly made mainly due to the reason that they’re not charging 60 bucks for it. 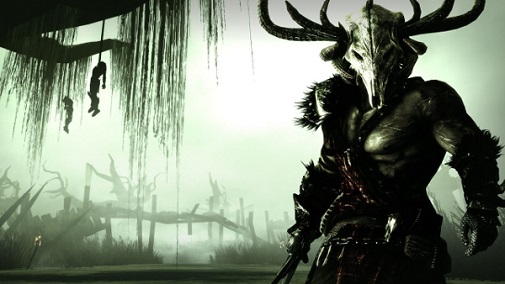 Bloodforge does not belong on XBLA, but it does, and here I am, reviewing it. It offers 5-6 hours of gameplay and costs what you’d expect a normal XBLA game to cost, so if you’re a fan of such games, then by all means check it out, but only if you are prepared to ignore all the shortcomings of this game and concentrate on things that make it fun, i.e., the hack-and-slash mechanics.

The hack-and-slash mechanics are fun. It is reasonably priced. It is quite lengthy for an XBLA game.

It is poorly made. The visuals are unpleasant. The game is generic and unremarkable.

Final Verdict:
FAIR
Bloodforge offers 5-6 hours of gameplay and costs what you'd expect a normal XBLA game to cost, so if you're a fan of such games, then by all means check it out, but only if you are prepared to ignore all the shortcomings of this game and concentrate on things that make it fun, i.e., the hack-and-slash mechanics.
A copy of this game was provided by Developer/Publisher/Distributor/PR Agency for review purposes. Click here to know more about our Reviews Policy.