Bloodstained: Ritual of the Night Review – Welcome Back

The symphony is complete, at last.

While we’ve had some great Kickstarter successes, such as Shovel Knight and Hollow Knight, the platform has largely been a failure as far as video games go, especially video games that attempt to try to emulate older classics – just ask Mighty No. 9 or Yooka Laylee how that went. All of which is to say, Bloodstained: Ritual of the Night, which actively channels classic Castlevania games stewarded by Koji Igarashi, and which has suffered a number of delays, and early builds that drew criticism, has a lot of baggage, before you even boot the game.

The good news is, most fears are unfounded. The long development cycle has been properly leveraged here, and the criticism has been taken to heart, to deliver a final product that is true to the vision of Igarashi’s multiple Castlevania games. Bloodstained: Ritual of the Night is a great Metroidvania game that channels the pioneering games of the genre. If you’re a fan of Castlevania: Symphony of the Night, what you get here is essentially the big modern console sequel to it you’ve always wanted.

I don’t mean that in just the superficial ways, though of course, those are the most obvious: like Symphony of the Night, Ritual of the Night has a gothic horror setting, with a castle as the primary stage, is a Metroidvania game, mixes RPG elements with action and adventure, features open ended exploration, and even has a lot of the same motifs for its save rooms, fast travel, and even the UI. Sometimes you can almost forget you’re not playing an actual Castlevania game, because in all but name, Ritual of the Night feels like one.

"Sometimes you can almost forget you’re not playing an actual Castlevania game, because in all but name, Ritual of the Night feels like one."

It plays like one, too- as mentioned, you have side scrolling platforming action, mixed with RPG elements, which usually involve you frequently changing your gear, sidequests, and crafting. You get a sprawling castle to explore, and you’re rarely given much direction on where to go or what to do. You’re on your own, left to your devices, figuring out where to go, opening up new areas, beating vicious monsters… it’s all the fun of a game like Hollow Knight blended with the satisfaction of seeing the numbers representing your character go up from an RPG. All of that’s here.

Bloodstained, then, very clearly knows what it is, and it is shameless about it. I mean that in the best way possible- the game makes no bones about what it is inspired by, and it wears that on its sleeve. Everyone wants a new Castlevania game, but none is in sight. Here’s a great one, that looks, sounds, and plays like a modern one would, and it’s really good. That’s more than enough.

That said, such a slavish adherence to the series that birthed it does come with its own drawbacks. The most obvious one is that this game doesn’t rock the boat- it’s a new game in the style of the Igarashi Castlevania games, and that’s all there is to it. If you’re expecting it to bring anything new or meaningful to the table, well, there’s not much here for you. Even the new central mechanic, the Shards mechanic, which sees you getting the powers of the various demons you slay over the course of the story, harkens back to the Gameboy and DS Igarashi Castlevania games.

Not doing anything new isn’t a bad thing, to be clear, and that’s not what I am driving at. But if you’re not on board with Metroidvania games, or Castlevania‘s take on them, then Bloodstained is not for you, and you should look elsewhere. And if you are expecting a revelation like Symphony of the Night was in its day, then again, you’ll be left feeling a bit underwhelmed. 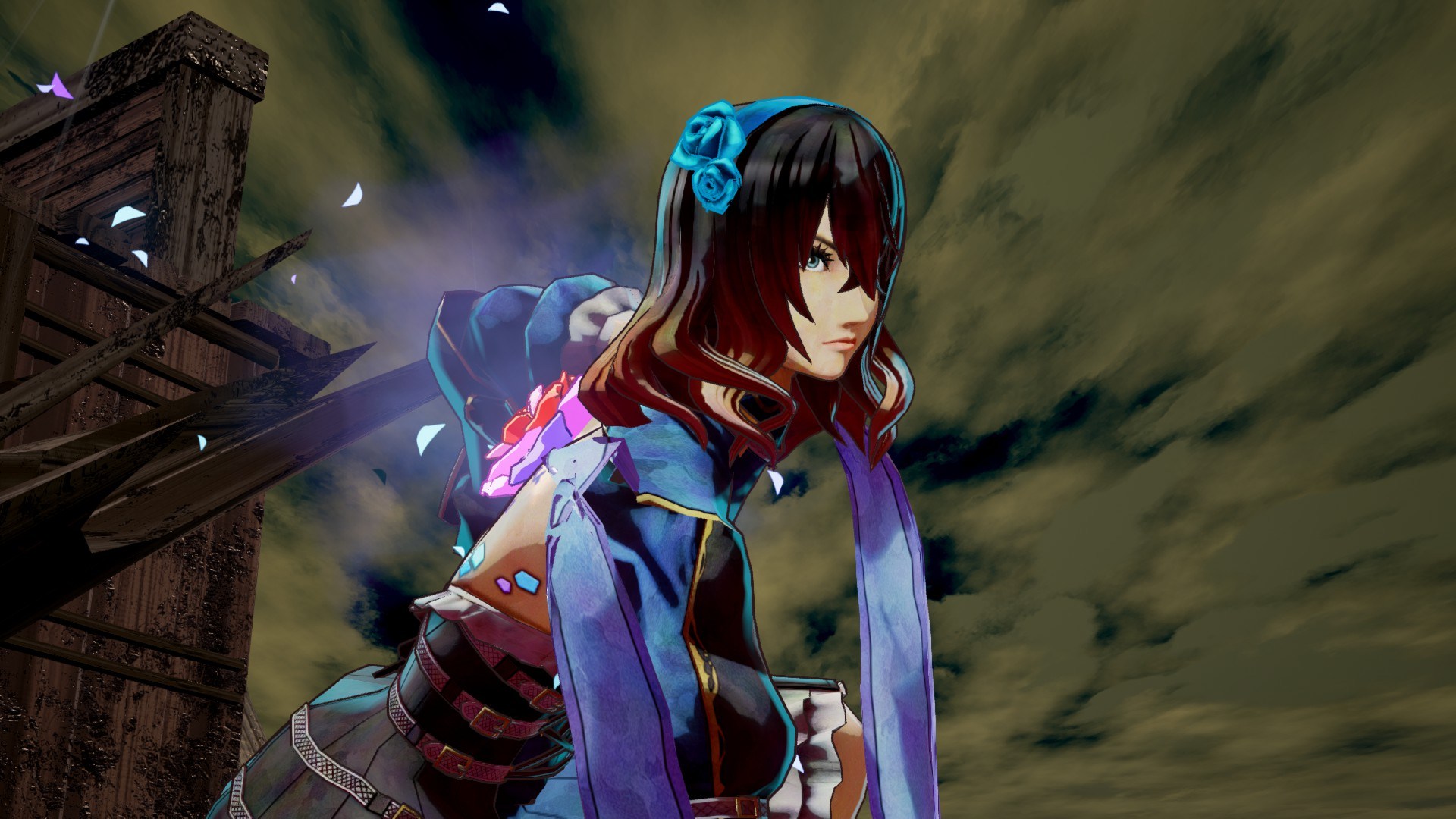 "On its own terms, though, Bloodstained is great, and there is enough here for this to be a must-play for fans of the genre, even those who may be unfamiliar with Castlevania."

Which brings us to the next point, which is that back in his day, Igarashi pioneered the genre. Symphony of the Night was a revelation. But Metroidvanias have come a long way since. Igarashi himself contributed to the genre with the handheld follow ups to Symphony, while the rise of indie games saw a lot of attempts at this style of game. And some of them are actual standouts, such as Hollow Knight, which has a claim to being possibly the best game ever made.

Bloodstained hardly compares to that game’s incredible, labyrinthine, mind bending level design, sheer deluge of content, or environmental storytelling. So it’s important to remember that Bloodstained, while very good, is also categorically not the best of its kind. The maps are simpler, the storytelling is more direct (and not as effective), and in terms of content, Bloodstained is comparable to Igarashi’s Castlevania games, which is great on its own terms, but again, is not necessarily on par with at least some of the competition.

On its own terms, though, Bloodstained is great, and there is enough here for this to be a must-play for fans of the genre, even those who may be unfamiliar with Castlevania. The thick layering of RPG mechanics certainly helps differentiate it; every weapon feels distinct, and it’s very easy to become attached to some over others, sticking to them even when there are relatively obvious better ones. Combat is sharp, with the manual backstep and the lack of recoil keeping things far more dynamic than they ecer were in older Castlevania games.

Grinding to level up becomes almost a subconscious act, and you don’t even think about it until you suddenly realize that you have just cleared and reset the screen for the fourth time straight to take out all the enemies. Leveling up itself is tangible, as your health and mana pools increase. Experimenting with your loadout is fun. Side quests provide a lot of incentive to explore more – not that a Metroidvania game really needs that.

Bosses are adequately threatening, and visually spectacular. Gaining new powers via Demon Shards, which you randomly get when you kill enemies, and trying them out can add more variety to your repertoire of attacks. And collecting all sorts of junk, to cook or craft it into something new and better, can become an obsession in and of itself. Unless you outright hate Metroidvania games, or at least the Castlevania ones, then chances are high that Bloodstained will get its hooks into you, because it is very well designed and executed. 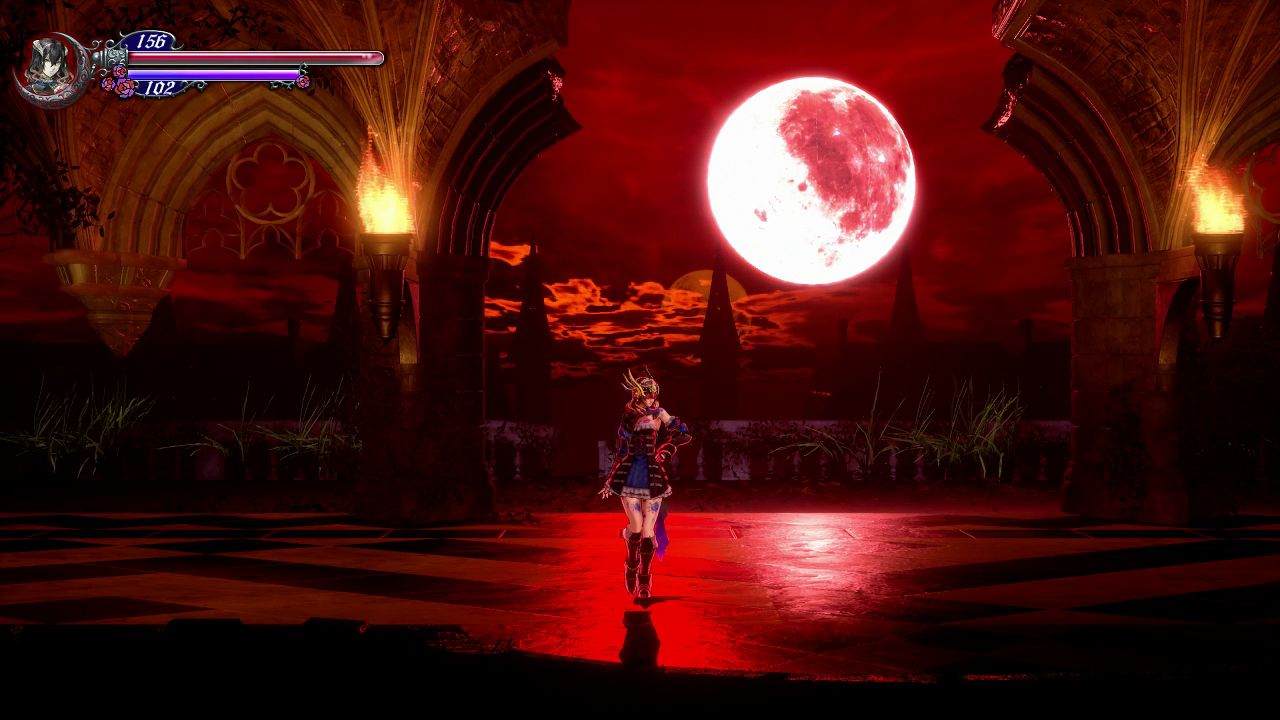 "An area that Bloodstained excels in remarkably, over almost every other similar game, is the sense of place it establishes. The Demon Castle and the surrounding parish feels like a real, terrifying place, and that actively contributes to the sense of sprawl that can feel almost daunting"

An area that Bloodstained excels in remarkably, over almost every other similar game, is the sense of place it establishes. The Demon Castle and the surrounding parish feels like a real, terrifying place, and that actively contributes to the sense of sprawl that can feel almost daunting. For that, I have to credit the game’s unexpectedly excellent art style. The art style is a new, almost 2.5D style that adds more color than the relatively muted visual style the game was originally pitched with.

When the change to the art was announced some time ago, I took grave issue with it, especially calling the changes made to the lighting as being problematic for the game’s atmosphere. Happily, I was very wrong about this, because Bloodstained is striking and gorgeous, and the art and especially the lighting creates a sense of melancholy and a creeping dread. Everything, from the characters to your attacks, to the animations, to especially the environments, looks resplendent. Every area of the castle feels distinct, while never losing its sense of imposing oppressiveness, and on the whole, the graphics and visual style of Bloodstained are an out and out triumph.

Similarly great is the soundtrack, which, again, almost shamelessly takes from Symphony of the Night in tone and style- and that is a great thing. One area where I do feel the game underwhelms is the actual voice acting. A lot of it sounds extremely corny and cheesy, and the use of British accents is inconsistent, with some characters barely having one, and others having one so thick you’d swear it was satirical.

"Bloodstained is basically the HD Castlevania game we’ve all been waiting for for a decade now, but never got."

Bloodstained is also rough around the edges, with the Xbox One and Switch versions at least suffering from a game breaking bug at launch (though an update is available that will patch it over); if you are getting the game on those two platforms, make sure to download the latest update before even starting the game, since the fixes don’t retroactively apply to your existing saves.

I need to be absolutely clear, however- this game is a winner. Bloodstained is basically the HD Castlevania game we’ve all been waiting for for a decade now, but we never got, and don’t let the lack of branding detract from that. It looks like one, it feels like one, it plays like one – really, the only way it falls short of its forebears is that while those were all envelope-pushing revelations, Bloodstained feels like it’s content to just do what it does well. And that’s absolutely fine – it’s the game we needed, and the one we deserved, and thankfully, now we have it.

This game was reviewed on Xbox One and PlayStation 4.

If you're not sold on Igarashi Castlevania games already, this one won't change your mind; the voice acting is corny and cheesy; game breaking bugs on Xbox and Switch versions, at least at launch

Final Verdict:
GREAT
Bloodstained finally delivers upon the promise of a modern follow-up to Castlevania: Symphony of the Night, and it does so spectacularly.
A copy of this game was provided by Developer/Publisher/Distributor/PR Agency for review purposes. Click here to know more about our Reviews Policy.