The Mechromancer was an additional character added to Borderlands 2 by Gearbox Software which brought the total characters in the game to five. Now according to a new tweet by Gearbox president Randy Pitchford, it seems that there’s one more character that will be added to the game.

This shouldn’t be a surprise because Gearbox has promised to bolster the game with a lot of content including new content and characters. They have released four DLCs so far and a fifth one was leaked recently too via PS3 trophies titled: Sir Hammerlock’s Big Game Hunt. 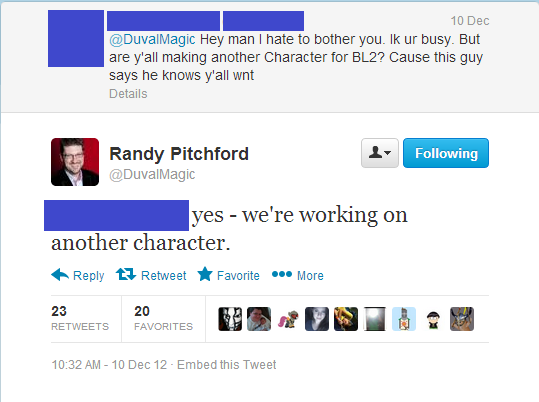 2k games sent an official confirmation to tbreakingp which said: “The necessary systems are in place for us to create additional playable characters, however the decision to make use of those systems has always relied on the community’s response to the Mechromancer.”

“2K and Gearbox have every intention to support Borderlands 2 with downloadable content through 2013 and beyond!”

We reviewed the game and gave it a glowing score, you can read that over here. Tell us what you think in the comments section below.