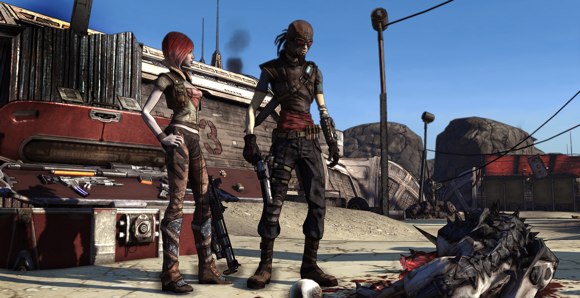 Gearbox says they’re upped the scale of the game in Borderlands 2, saying that it will be one third bigger than the original game, and will include locales other than just deserts.

“It is definitely a bigger world this time around. I’d say we built about a third more space than we had in the last game,” Borderlands 2 art director Jeramy Cooke told Destructoid at PAX.

“Scale is so important for a world like this. It’s about exploring. It’s about what are you going to find around that next corner.

“To me, when you see that little blip on the distant mountain peak, I gotta get over there now! There’s gonna be a gun there for me. That’s what I want. It’s all very seamless and we worked very hard to connect each space to the others in a logical way.

“For instance when you’re seeing the top of the dam in the demo, you’re looking off into the deserts in the South, and if you look to the other side you’re gonna see the frozen wastelands on the other side. It’s all totally connected.

“We just decided okay well we need to go out and explore the rest of Pandora. So you get grass, you get ice, you get volcanoes.

“You were basically in the mid-West of Pandora before, and now you’re gonna head North, and also South-east a little bit. We actually worked really hard on the world map, the level design really loves this stuff, really takes care of it. So we locate every map in a real spot on the continent of Pandora.”

Borderlands 2 will be out next year. You can check out the full interview below.