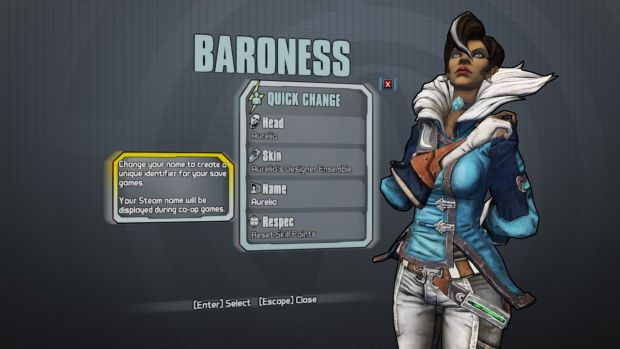 2K Australia’s Borderlands: The Pre-Sequel is now available for previous gen consoles and PC but it’s yet to receive its first DLC pack. The Season Pass is currently available and one of the additions will include Handsome Jack as a playable character. But what else can we look forward to?

According to TechnoJacker of the Se7enSins Gaming Community, another DLC character, Aurelia the Baroness, has been uncovered from the next update on Steam (available to those who subscribe to the beta channel). This revealed some information about her and while you can’t “officially” play as her until the DLC is out, there seems to be a way to forcefully play the game with her.

We’ll wait for Gearbox’s confirmation on this but honestly, the above image looks too real. What are your thoughts on Aurelia and what do you think her class will be capable of? Let us know in the comments.