Corbie’s train manager surges ahead with its concept but its execution needs some more work.

Early Access has come to mean a lot of different things to a lot of different people. However, for the consumer, it primarily entails investing in a new, intriguing and often out-of-left-field design while the game itself is still in development. There are risks involved for sure but the very nature of Early Access means certain ideas will stand out better than others.

Daedalic Entertainment’s Bounty Train, developed by Corbie Games, certainly stands out. As a train conductor in the Wild West, you’ll be touring the United States in the 19th century, trading with different towns, ferrying passengers across the country, fighting off dangerous bandits who want a piece of your cargo and trying to keep your crew safe while building a legacy. As interesting as the idea is, there’s still a lot to be done about the execution. 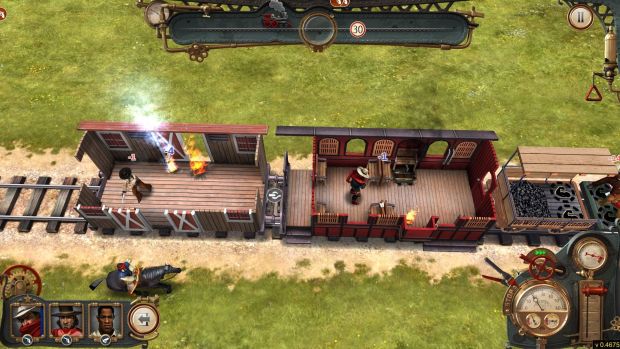 "Bandit fights tend to add an extra wrinkle to this and it doesn’t help that the early going can be quite difficult for those seeking to turn a profit."

Bounty Train doesn’t try to provide too much simulation in its “train” aspect. You’ll be managing your staff, leveling them up as more tasks and quests are completed, procuring coal and feeding it into your engine all throughout. There are specific sections like fighting off bandits which allow you to take control of the train but for the most part, it’s fairly on rails (no pun intended). This isn’t all that bad to be honest since Bounty Train’s transportation is only a piece of the entire puzzle. The other pieces involve selecting your crew and deciding which goods to ship to different cities. Certain quests offer different rewards depending on the goods you provide and opening new routes to further diversify your business is fun.

In terms of combat, Bounty Train throws bandits at you in real-time and tasks you with either blowing them away with firearms and explosives or fighting enemies up-close should they happen to board your train. Different classes allow you to assign characters to be ranged attackers, focus on repairing the train or some mix of the two. Despite the real-time nature of the combat, it’s not as hectic as you’d think and you can pause the action at any time using the Spacebar to dole out commands.

The focus always remains on your cash though. Whether you’re buying more carriages or deciding to prioritize shipping goods versus carrying passengers (since a single carriage can only accommodate one thing or the other), or even deciding which goods to ship, your revenue is always the primary concern. Bandit fights tend to add an extra wrinkle to this and it doesn’t help that the early going can be quite difficult for those seeking a profit. In many ways, this is a stumbling block for Bounty Train. Rather than feeling like a legendary conductor that’s part gunslinger, part adventurer, I felt like a shipping magnate managing a crew that I wasn’t all that invested in, save for their use in battles. 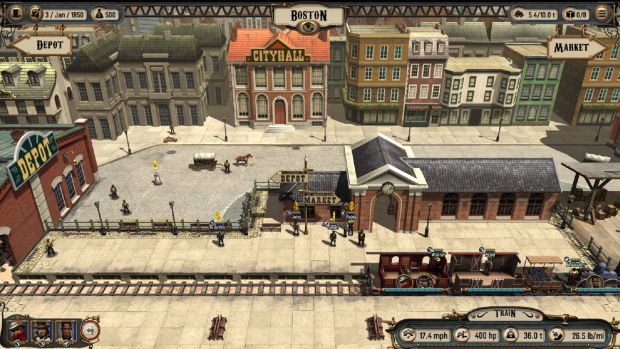 "I’m not angling for pistols at high noon or anything but anything that could highlight the game’s action-adventure elements and less of its resource management and cash goals would be appreciated."

The Early Access nature of the game also brings up a myriad of other issues. Fights with bandits lack any real depth and eventually boil down to whom has the most constitution as opposed to any real strategic thinking (though perma-death does motivate you to at least keep your crew alive). The interface also needs some work as getting into a game and navigating through the heaps of text can be cumbersome at times. Bounty Train also seems to lack some of the more visceral moments that one comes to expect in the Wild West. I’m not angling for pistols at high noon or anything but anything that could highlight the game’s action-adventure elements and less of its resource management and cash goals would be appreciated.

Visually, there’s not much to complain about and it simply comes down to how much of a fan one is of the Wild West aesthetic which has been captured exceptionally well. Performance was pretty fluid throughout and there weren’t any significant glitches that affected my playthrough. Corbie Games still has a ways to go and it plans to diversify the combat, implement more historical events along with unique cities and landscapes, add more unique characters, further expand on the quests and much more. I’m particularly excited for the chance to actually affect US history and explore a more dynamic world but Bounty Train will definitely benefit from a better economic system as well.

As it stands, Bounty Train will be out in early 2016 on PC. While the concept is genuinely interesting, work needs to be done to fully realize it. One hopes that the developer can ease up on the economic aspects of Bounty Train in favour of its adventuring and combat. Stay tuned for more information in the future or check it out for yourself on Steam Early Access. Let us know what you think of the experience in the comments below.