Breach is an online first-person shooter for the Xbox Live Arcade and PC.  It was developed by Atomic Games, the same team developing the controversial ‘Six Days in Fallujah’.  After Six Days was dropped by Konami, Atomic Games said to themselves, ‘let’s make something of this in the mean time’ and the outcome was Breach.  The game is strictly an online shooter and a good one at that.  Not only is the Breach trademark, cover based and destructible environment, but it is also the Atomic Games trademark.

The game utilizes the Hydrogen Engine to support the completely destructible environment. You can destroy everything, put breach charges on outside walls and enemies behind are killed along with the wall. You can even shoot out little ‘shooter holes’ to aim through and give you cover until over course an enemy rocket launcher destroys your cover completely. You play US elite field operatives. The CIA Special Activities Division sends teams to complete black operations that no one knows about… in and out like it never happens. These scenarios are what you are doing in the game with special weapons, gear, and real gadgets that I never even knew existed.  Another great aspect of the game is that you get more XP for killing someone a higher level than you which I think should be in every game.  The XP you can gain from a kill is 5 to 35 XP.

The game is heavily based on cover and the destructible environments. Enemies can’t hide in a building, if you blow the shit out of it and enemies can’t grab cover on a cement median when it has a rocket launcher coming it’s way. Which keep in mind, rocket launcher although seemed a little over powered, they are only available at certain ammo boxes with a limited amount of them. After playing so many recent first-person shooters I would sometimes forget that I could use cover which is clicking the right stick that you can grab cover on nearly anything which is very useful. At the same time the cover system is not as smooth as other games with cover systems and could use some work.

Breach lets you rank up and the XP you earn is the same as the currency you use to purchase and upgrade weapons, perks as well as gadgets. You can gain XP from kills, assists, captures, saves and victories. You unlock new weapons, perks and gadgets at you level up which you can you use your XP points to purchase newly unlocks assets. There are 5 classes; Rifleman, Gunner, Sniper, Support and Recon. Recon is a special class that can only be unlock by maxing out you Rifleman and Sniper classes.  There all also 5 maps in the game right now ranging from snow to detailed landscapes to a missile silo.  ‘Silo’ is great for sniping while ‘Peak’ is smaller and a good chance to use your shotgun.

The game modes are really cool and innovative. Infiltration is basically like Domination from the Call of Duty series, just hold down one or more of the 3 control points. In Convoy, as defense you must escort two trucks to their destination while the truck will not move unless your team is near them and they are not in need of repair. The attackers can damage the vehicles requiring truck repair which can take time as well as killing you stopping the truck movement. If the trucks don’t reach their destination in time, defense looses. Convoys can also get blocked by blockades requiring you to take them out via explosives. In Retrieval the objective is to locate the canister and bring it to the capture zone marked on the mini-map which there are multiple ones to choose from to throw the enemy team off. The team with the most points at the end of the match wins. Sole Survivor is self explanatory, last man standing wins. And no shooter would be complete with out Team Deathmatch(TDM), which if you don’t know what that is, there is a game call Viva Pinata you might like. Of course Battlefield does not have team deathmatch but that’s OK because it’s awesome as well as a tactical shooter being their trademark. 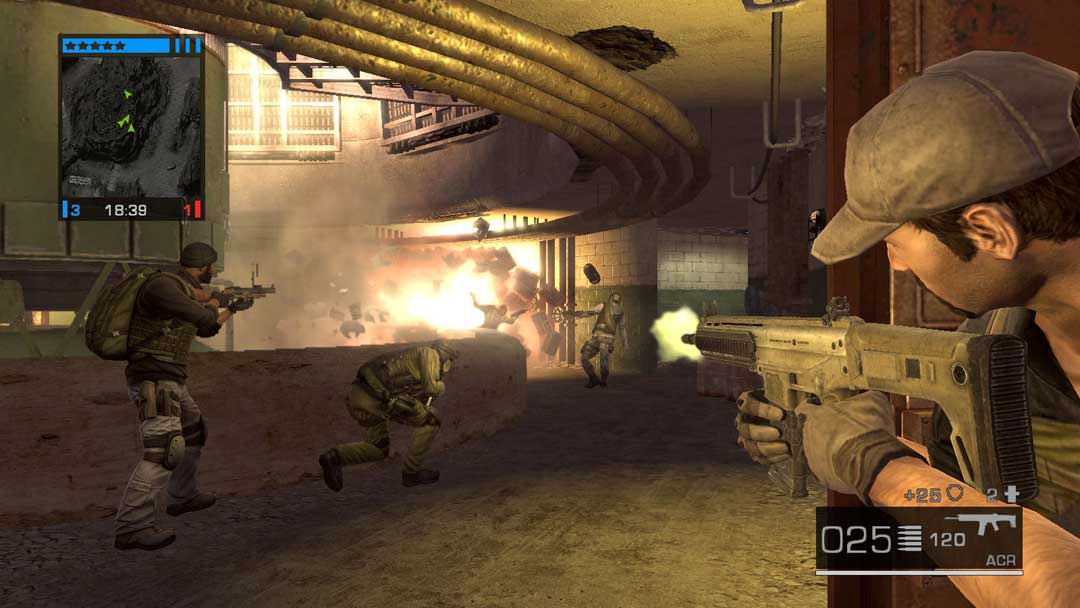 Just a peek out of cover.

There is no automatic health regeneration which normally I would despise, but Breach pulls it off perfectly, partially because it doesn’t take that much to kill someone but you can get med-packs as a gadget to heal you or your teammates. Speaking of gadgets there are quite a few you can get and come in handy too. There is Dragon Skin which is armor, a sticky bomb(grenade), remote motion sensor (detects enemy motion, playable anywhere including a ceiling), Bionic Ear (increases enemy movement/sound with on screen sensor), IR Sniper Detector (any scoped weapon that is within the user’s view a glare is created on the lens, helping you locate enemy snipers), a Sabotage Kit that allows you to plant C4 on enemy weapons cashes or mounted guns resulting in an explosion upon use, an M2 Slam Charge (can be used as landmine or to detect enemies), a Medic Kit which is self explanatory, the M79 Pirate Cannon (thumper/grenade launcher) and the best is the Sonic Imager (See through almost all materials for a short period to see enemies). 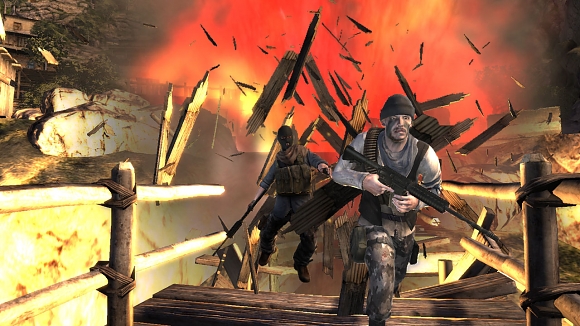 At little as it takes to take your opponent down, there is also a hardcore mode, but it’s not really for the easy kills.  The aspects of hardcore mode make the game more realistic and make you learn to communicate with your team to win.  The mode take away vital aspects of the game that you might take for granted such as:

Minimal HUD experience – Aiming reticule and other items turned off, while certain other items are left in as real life affords greater situational awareness.

Disabling of Mini-Map radar system – removes the ability to use the radar to track enemy and friendly forces, players must be more aware of their surroundings.

Disabling of Kill Cam system: No longer gives you a hint about the person who killed you or where they were located — keeping your effective kill locations hidden.

Breach is an amazing shooter for an arcade game but cover and the use of destructible items is necessary for true victory. You just have to know how to use them. The cover system could be tweaked a little though and sometimes a dead on sniper shot are not always dead on, but other than that this is a great game and just a taste of what Atomic Games has to bring us. The game is rated “T” and will is out on January 26th, 2011. On XBLA it will cost 1200 Microsoft points and it will be $19.99 on PC over Steam and in stores (although after discounts it should be the same).

One of the best Arcade shooters on the market. Utilizes destructible environments and cover to create innovative scenarios. Ranking system with perk, gadgets, guns and attachments that a paid for by experience.

Final Verdict:
SUPERB
Not that many arcade shooters are out there and Breach happens to be a good one. Aspects in the game are almost ridiculous not to be in other shooters like the fact you gain more XP for killing someone at a hgiher level then yourself. Cover systems are always a plus and Atomic Games pulled it off along withe the destructible environments leaving room for some intense scenarios.
A copy of this game was provided by Developer/Publisher/Distributor/PR Agency for review purposes. Click here to know more about our Reviews Policy.