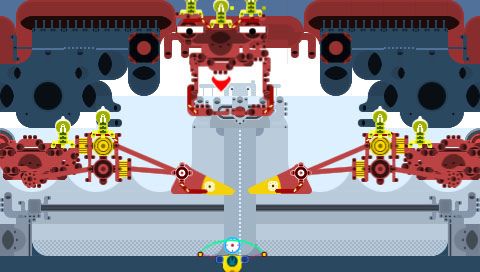 BreakQuest: Extra Evolution is a remake of BreakQuest which was released in 2004, and contains a lot of new levels and other innovations. It is also quite a competent game too. The studio that remade the game called Beatshapers have a lot of games in the pipeline for the Vita and PSP, and we talked to the founder Alexey Menshikov, about the challenges they encountered and also about the future.

It’s a physics based game, features 100 new levels, and a lot of boss fights. The game’s on the PS Vita, PS3 and PSP.

It was quite a random decision that started with ideas of quick refresh levels and artwork which later grew to the total conversion of whole game. So BreakQuest: Extra Evolution is totally new game based on original BreakQuest idea. We’ve reused the most successful and fun elements from original game but re-wrote the game completely. I can only imagine, how Felix Casablancas from Nurium Games, an original BreakQuest author created the game in 2004. At that time, it was one of the first physics interaction titles.

It’s on the PS Vita as well, and as you know, Sony has said that it’s extremely easier to develop for. Did you guys find it challenging to develop for it?

The development process actually happens on PSP devkits, the minis are using same package to play on PS Vita and plays through emulator. But from our StarDrone Extreme PS Vita launch title development experiences and other games we are developing right now – yes it’s easier to develop than even on iOS. The difference is there is a certain knowledge threshold to engineer qualification applied but it is easy to develop for sure. PS Vita is amazing device, very powerful and solid, it’s a pity that other developers are not jumping the wagon.

Let’s talk a bit about the remaster quality. Has the graphics been significantly improved? What other technical improvements does this version feature?

In the beginning, our designer, Alexander, told me that it’s not possible to make a new set of artwork (as I wanted to keep the old school look ), it is easier and definitely better to make everything from the scratch. We spend some time solving technical issues trying to fit all 100 levels to the minis format, its took some time on R&D process – as result, every background is unique and created from constructor, all 100 levels squeezed to the 2Mb (compare to 100 x 480x272x32bit = 52mb of raw data). We also optimized the physics and particle system – unfortunately PSP is quite old hardware – physics requires faster CPU, more than 222 Hz (another minis limitation), but we got 30fps in 90% of levels action.

Tell us something about the new content in Breakquest: Extra Evolution?

What makes BreakQuest Evolution is is definitely the 100 new levels – each has unique art, sound and game mechanics. Than we have 10 boss levels – each is a unique kind of mini-game, which requires strategy and skills to defeat. Bosses attacks players with weapon which freezes, reverses control, removes bumper for a short amount of time. Player receives award and new shuttles will activate power ups – each boss have their own shuttle, so we recommend starting play the game from different lines. Bonus shuttles really help on various levels.

Talk us through the gameplay mechanics as well. It will be helpful for people who haven’t played the previous game.

BreakQuest Extra Evolution is a unique block breaking game. Each of the 100 levels as I mentioned, has different game mechanics – one level contains handing bricks on ropes, another bricks are floating in the space, some levels have bricks moving. I’m calling them “bricks”, but they are rather elements, sometimes it is not an easy to understand which elements to smash but players will be able to figure it out quickly. This is what inspired me when I saw the original game and we developed it to the new Extra Evolution game.

Another game mechanics improvement is the Energy Shield. The PSP screen is quite wide and we have learned lessons from the previous game, so made this always working shield mechanics. So one ball launched, players see the charging lines coming from left/right sides – this is charging process. Player may activate Energy Shield any moment and shield can survive 2 ball bounces – this is complicated with active multiball bonus but in other cases works perfectly – player has to master this, the only thing to defeat bosses, especially when shuttle damaged by boss weapon.

PS Mini’s doesn’t feature trophies unfortunately, do you guys think for smaller games such as these not having trophies reduce the sales potential?

Yes, we believe this have a major affect on this type of games, also any kind of global scoreboards affects replayability. I’ve followed many of forums and blogs posts, many people requests for trophies. I totally understand why it’s been made from the Sony but its seems players demands more nowadays.

The game costs $3.99, which is a fantastic value when you take into account it contains 100 remastered levels, what other things are there in the game that makes this worth the money for people on the fence.

Its not really only remastered levels – most of them are brand new, than 10 bosses which are quite challenging, new sound track, unique Energy Shield mechanics, 21 integrated awards, a nightmare complexity secret level  – this gives new experience to players and makes BreakQuest Extra Evolution unique.

What other games are in the pipeline right now at Beatshapers? Can we see some unique new title for the PS Vita?

Yes, we have more games coming. Two Minis: Carnivores SKU and secret_title, than one work-for-hire PS3 went to tests and ETA early next year but its publisher and we working on 2 titles: PS Vita exclusive game and PS3/PSVita/PS4 title (not sure about all platforms same day but we aiming next-gen).