When a game is titled Broforce, one should expect a merry band of hypermasculine action heroes bonding together to fight against the bad guys and saving the day. This is precisely what Broforce does. Developed by Free Lives, Broforce puts you through some meaty side scrolling run and gun gameplay, reminding you of the good old days of Contra.

Broforce is one of the most intriguing indie titles of the year so in order to know more we got in touch with Programmer Richard Pieterse and Creative Director Evan Greenwood to ask them a few questions about the game. Check out their response below.

Rashid Sayed: To begin with, can you please introduce yourself and tell us how you got into the games business?

We’re Free Lives! Our constituents include enumerable humans, at least 8, and one miniature Greyhound named Leeroy Jenkins. Evan Greenwood is our fearless leader, creative director, and dreamweaver. Everyone else are just flesh cogs in the Broforce making machine! We got into the business the same way everyone does, we just started making games. Terrible, terrible games. After while some of them started to get less terrible.

Rashid Sayed: What was the inspiration behind developing a hypermasculine action hero-style commando video game?

Hypermasculine action hero-style films of course! Pulpy action classics are really special. Wherever you go all over the world you can walk into a bar and find someone who remembers how cool it was watch rambo or Robocop as a kid! It’s a universal bond. The films were silly and fun. The bad guys were simply bad and the only way to stop them was through muscles , bullets and explosions. A better question is why have Bro Hard and Brommando never teamed up before?! 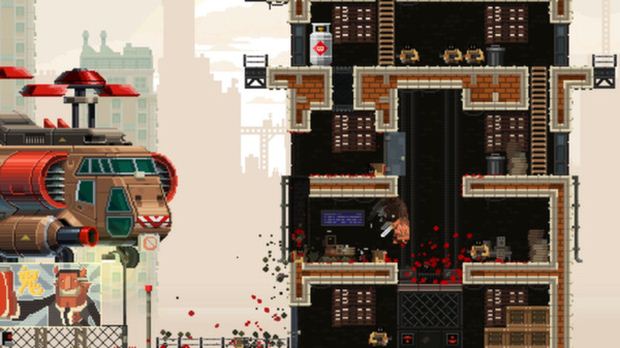 "Yeah, definitely. Bro is certainly a loaded term , and one that means different things to different people. When the project began I think bro was sort of meant in a bit of a derogatory way, referring to steroid pounding meat heads. "

Rashid Sayed: Broforce is a really cool name for a video game. But don’t you think using that kind of a name you are only appealing towards a specific market?

Yeah, definitely. Bro is certainly a loaded term , and one that means different things to different people. When the project began I think bro was sort of meant in a bit of a derogatory way, referring to steroid pounding meat heads. Over time, as we’ve developed the game, our relationships to the characters have changed. I think, to me at least, a Bro in the context of broforce is someone who has got your back.

The bro’s all have each others back and stand united against terror. The name Broforce will definitely turn away the audience that turn their nose up at bro culture, but the bro jokes are so deeply entwined in the game and it’s origin that it couldn’t exist without them. As you say, it’s a cool name and I think that at the end of the day it turns as many people onto the game as it may turn away.

Rashid Sayed: The game was in early access earlier this year. What are your thoughts on early access and do you think paid early success is justified since one is essentially taking the community’s help and time to develop a quality product.

I do think early access is justified. The funding it takes to develop a game is significant and not simply magicked out of the air. The company was in significant debt before the game went on early access. Financial uncertainty puts a lot of stress on the team (especially the idiot who invested all his money) and has negative effects on the development of the game and the interpersonal relationships of the team. Since early access we have been able to live comfortably and just focus on making stupid jokes and building the game.

We very much subscribe to open development. Ever since the initial prototype there has always been a build for people to play and give feedback on. However,it is a fine line to tread. Early access can easily be abused, and often not even intentionally. As you say, the community is helping us work on our dream project, giving us both their money and investing their time in providing really thoughtful feedback. Thats a pretty special relationship, there’s a lot of trust exchanged, which should be acknowledged and appreciated. It’s easy in the madness of development to take the community for granted. 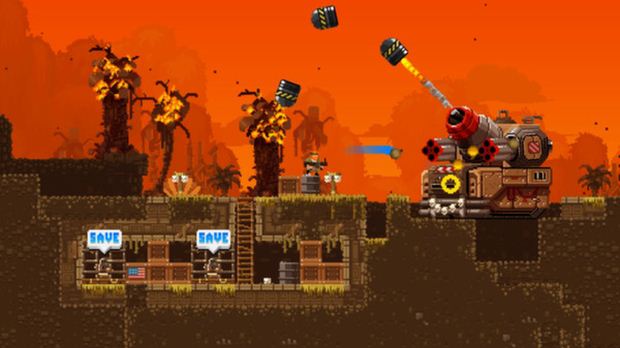 "In truth, terrain destruction was never meant to produce any extra strategic depth. Terrain destruction was implemented entirely because it feels badass and that suited the theme, that having destructible terrain produced emergent strategies to defeating enemies, or nasty surprises for the players themselves, was a wonderful side effect."

Rashid Sayed: What are your thoughts on the lack of early access on PS4? [Xbox One has limited early access but only from EA]

Rashid Sayed: Why is Broforce not coming on the Xbox One?

Mostly because Sony reached out to us with a deal we couldn’t reasonably refuse, and as far as I know Microsoft has an clause in their contract where they won’t accept an indie game if it launches on XBox after Playstation.

Rashid Sayed: One of the notable features of Broforce is the destructible environments. Can you tell us how that will play into intelligent gameplay mechanics?

I hope that that the destructible terrain in Broforce never produces intelligent gameplay. I worry that that gameplay might become self aware, spread to other computers, and doom the human race.

In truth, terrain destruction was never meant to produce any extra strategic depth. Terrain destruction was implemented entirely because it feels badass and that suited the theme, that having destructible terrain produced emergent strategies to defeating enemies, or nasty surprises for the players themselves, was a wonderful side effect. I think what caused this effect to be so pronounced was our focus on chain reactions. It’s actually really hard to destroy just one block of terrain in Broforce, and we try to build levels that are poised to self destruct, and that encourages players to think about pulling the trigger.

Rashid Sayed: In my opinion, the game is an instant throwback to retro gaming. It reminds me of the good old Contra. Is it safe to say that Broforce will replace the legendary series and will result into a number of sequels?

Thank you! That’s pretty intensely flattering! I think it’s safe to say that it won’t, but how amazing would it be if people grow up talk about the glory days of playing Broforce on the couch with there best friend or their dad?! We have no plans regarding a sequel. Working at Free Lives is so awesome that we keep pushing ourselves to explore and make games in different genres. It keeps it challenging and rewarding. Though who knows, the release money will only support so much cocaine and jetskiing, after that all bets are off! 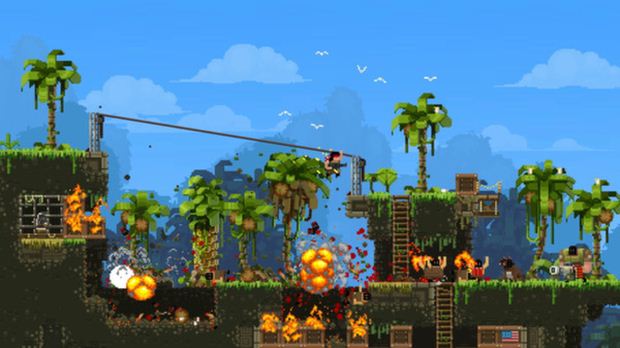 "The game is designed to be played on the couch with your best friend, so I really like the idea of players hanging back and configuring a plan together then executing it ruthlessly!"

Rashid Sayed: The game is obviously a run and gun but are there going to be moments where player needs to lay it back a bit and think about the situation ahead?

Definitely, the game difficulty is pretty interesting in that regard. Although it can be rather punishing at times, enemies almost never approach you. At any time you can hang back and try figure out the ultimate infiltration strategy. The game is designed to be played on the couch with your best friend, so I really like the idea of players hanging back and configuring a plan together then executing it ruthlessly!

That said, people can play it however they want, and make it as difficult for themselves as they like. What’s surprising is that while caution is nearly always an easier approach, players don’t tend to be cautious. There seems to be a tension between reliving one’s murderous action hero fantasies and not being killed oneself.

Rashid Sayed: We already know what weapons and skills the protagonists will have, but what about the enemies? How skilled are they?

The mooks are pretty incompetent, though I believe Satan is doing his utmost to arm them with the most unpatriotic weapons he can get his hooves on. So far the Bros’s have had it pretty easy, but they’re going to be facing other worldy forces that they may not be prepared for in the next update.

Rashid Sayed: How was Sony’s approach in letting you understand the PS4’s API?

We’re actually not porting the game in house. Abstraction Games are handling the port. They’re the real C++ Cowboys. They’ve done a great job so far.

Rashid Sayed: Is this game going to support cross buy and cross save across PS4 and PS Vita?

We should probably know what these things are. I’m going to say yes?

Forgehouse Films made an awesome Broforce fan film! You should go watch it! Mr. T is amazing!