A part of me has a very soft spot for Broforce, the 2D side-scrolling shooter/platformer from Free Lives Games. The concept didn’t have a tough time grabbing me – whether it’s the 80’s action hero fetish and hyper-patriotic stylings or the ultra-violent, explosive gameplay, Broforce seemed hell-bent on appealing to my childhood in the craziest way possible. Broforce is still a game though and one that has its share of ups and downs all-throughout.

In Broforce, you control a squad of Hollywood-inspired “Bros” that have to “liberate” a bunch of hotspots teeming with “terrorists”. Political incorrectness aside, the game seems much more focused on appealing to the bravado and out-and-out violence that characterized early action movies starring the likes of Arnold Schwarzenegger, Sylvester Stallone and so on. Throughout Broforce, you’ll be rescuing hostages and gaining access to a number of Bro-monikered icons like the Commando, Agent K, Rambo, and so on (for instance, MacGyver is actually MacBrover and Blade is Brade. Yes, seriously. Just go with it). 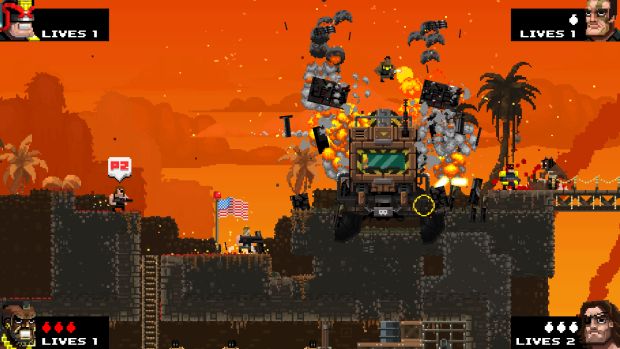 "Complimenting the insane action is the eclectic selection of Bros. Each Bro has his own special attacks and explosives. Bro Dredd, for instance, has bullets which can bounce back and forth from objects while his explosive is a Smart Bomb that can be remotely piloted."

You’ll be commanded to head to different hotspots inspired by countries like Vietnam to cleanse all of it of the bad fellows. Levels are simple at first, simply tasking you to eliminate hostiles while reaching an outpost, executing the satanic leader (and by satanic, we mean Satan in a black suit literally) and extracting from the location as it’s carpet bombed to the tune of guitar riffs. Moving along, there will be more complex areas which task you with climbing and destroying the walls with your weaponry to gain the advantage on foes.

One cool little feature is the ability to shoot some explosives so they travel upwards and into enemies. It’s also easy to destroy the floor under your foes and watch them fall to their hapless deaths. Certain areas will be laced with mines that you have to quickly jump away from and enemy spawns will throw heavy gunners, foot soldiers and suicide bombers your way. There will even be devil bosses in some cases that range from an attack chopper to a large, terrorist-launching cannon.

Complimenting the insane action is the eclectic selection of Bros. Each Bro has his own special attacks and explosives. Bro Dredd, for instance, has bullets which can bounce back and forth from objects while his explosive is a Smart Bomb that can be remotely piloted. Bro in Black can use his Neuralyzer to confound foes for a set period of time while his Noisy Cricket fires piercing, explosive lasers that threaten to knock him back with each trigger pull. There’s a certain appeal to acquiring new Bros, especially when trying to recognize them. However, not every Bro is made equal. Some are fairly useful in every situation like Snake Broskin with his machine gun and Molotov cocktail. MacBrover, on the other hand, feels limited by the throwing range of his TNT explosives (though his explosive turkey can be devastating if thrown in the right place). Similarly, Brodell Walker’s limited range with the shotgun doesn’t hold a candle to the range and devastation of Brommando, Rambro and Brominator. 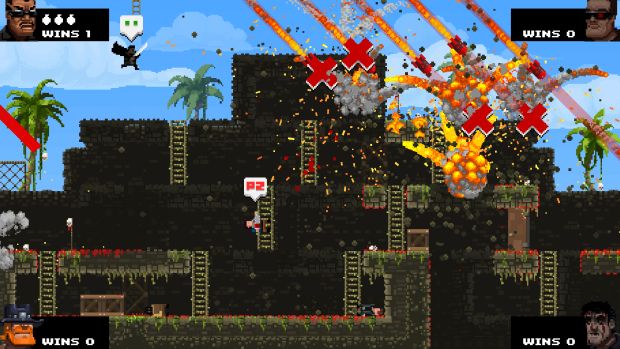 "There’s also the fact for all of its retro 80’s action movie pandering and graphics, Broforce can be very repetitive. After a while, you’ll tire off the numerous explosions and simply shooting enemies until they’re mincemeat."

Each Bro offers an intriguing new experience but the biggest issue is the automatic switching between Bros every time you rescue a hostage. Tearing things up with the Brominator? The game may decide to transform you into the melee-centric Brade when you rescue your next hostage. Enjoying the intriguing navigation mechanics of Cherry Broling? You may find yourself as Bro Dredd next and dealing with the clunky, slower firing hand cannon. It doesn’t help that you have no choice in the Bros selected but you’re also pushed to rescue hostages every single time in a level. If you don’t, you won’t have enough lives and in such a chaotic environment where enemies can one-shot you, those extra lives will be necessary.

Broforce walks an intriguing line between challenging and frustrating. Blowing up your environments and setting off a chain of explosions while too close can result in a shocking demise more often than not. Being unable to properly kill enemies from a distance because your select Bro doesn’t have a high fire rate is just plain annoying. Going through a level can oftentimes alternate between bum rushing everything and reaching the finale quickly or banging your head against the stupid deaths you incur. And sadly enough, the number of lives you gain from rescuing hostages does not carry over into other missions.

There’s also the fact that for all of its retro 80’s action movie pandering and graphics, Broforce can be very repetitive. After a while, you’ll tire off the numerous explosions and simply shooting enemies until they’re mincemeat. This isn’t even akin to marathoning all the famous action films in a row and becoming numb from the violence. It’s simply that when it comes to gameplay, there’s not a whole lot of variety in Broforce even as each character tries to innovate the act of violence in some way or another. One can really only shoot so many terrorists for so long. 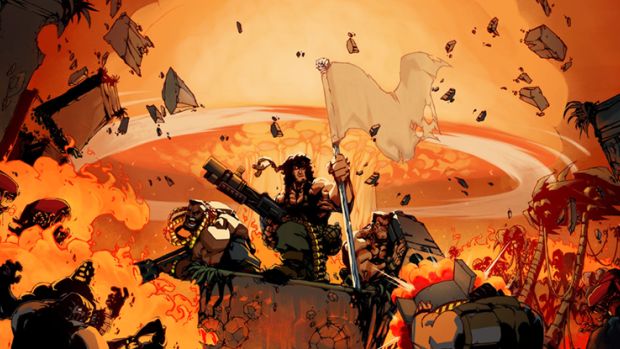 "At the end of the day, Broforce is best enjoyed in small bursts. It’s come a long way since Rambros in 2012 and the action is certainly manic enough to get you coming back. "

That being said, Broforce does try to think outside of the box. The online co-op can be pretty fun at times though you’ll obviously enjoy the rip-roaring nature of the action with close friends. Explosion Run is a cool little mode that challenges you navigate through auto-scrolling levels filled with explosives without dying. Arcade Mode is just a simple run through the game’s levels while World Story Campaign lets you choose which hotspots to batter into oblivion. There’s even a Level Editor in case you want to craft your own little carnage-filled stages.

At the end of the day, Broforce is best enjoyed in small bursts. It’s come a long way since Rambros in 2012 and the action is certainly manic enough to get you coming back. That doesn’t change the fact that it’s ultimately shallow, doesn’t have much direction to it, can frustrate you much like the harder levels of Contra (even without automatically switching characters in between) and gets repetitive after a while, much like your run-of-the-mill 80s action film. Play it for the nostalgia rush and the comedic callbacks to famous action stars but don’t go expecting a ton of brains from these Bros.

Gets repetitive after a while. Automatic Bro switching and hostage rescue for extra lives is annoying at times. Chaotic battlefield can lead to many random deaths. Not all Bros are equally awesome.

Final Verdict:
GOOD
Broforce is that action movie you pop in when you want to unwind and not think too much. It doesn't have a lot of depth and there are better action games out there but it's a quick, funny little shooter that aims to please.
A copy of this game was provided by Developer/Publisher/Distributor/PR Agency for review purposes. Click here to know more about our Reviews Policy.