It’s always nice to see studios being friendly with each other, and considering the competitive nature of today’s world, it’s sometimes a rare sight to see. Bungie gave the reigns of the Halo franchise to 343 Industries who have not let them down by creating a fantastic game and one that has broken a lot of sales records for Microsoft.

A fan asked a random question to Bungie and 343 Industries on Twitter urging them to go mano-e-mano with each other in Halo 4, and the answer was quite diplomatic from both of them. 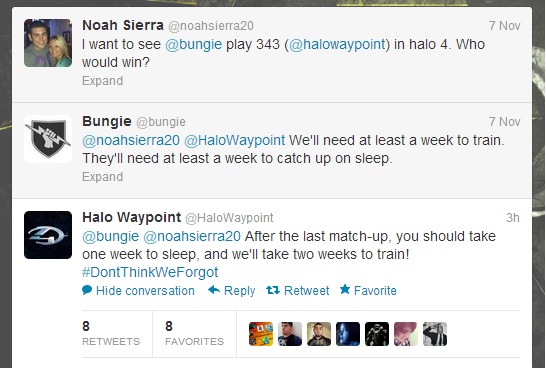 As you can see 343 doesn’t think they require time to sleep and catch their breath after releasing a mammoth game, they believe they can still kick Bungie’s ass. Such friendly banter is quite pleasing to see between studios, I kind of wish plenty of other studios did this.

We’ve seen it happen before where Naughty Dog congratulated Epic Games for shipping a pretty impressive Gears of War 3, and many examples like that.