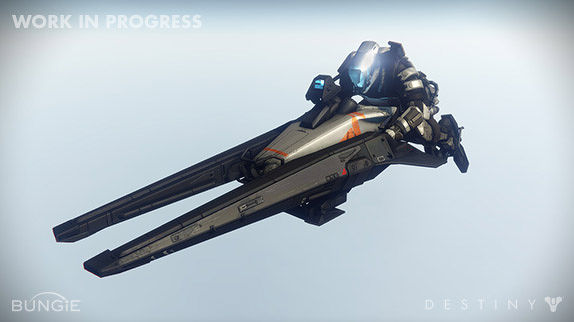 While clarifying that its upcoming online MMO shooter Destiny wouldn’t have any kind of animal mounts, Bungie did promise vehicles. We’ve seen plenty of spaceships but the Shrike might be the first real land vehicle we’ve seen yet. And if it reminds you of the land-speeders from Return of the Jedi then give yourself a gold star. Along with boost and three starting designs, the Shrike can be summoned any where. You can also customize it with your paint schemes.

Bungie described the Shrike as, “If you are a knight of the City, this is your steed. The world of Destiny is an immense frontier. Your missions as a Guardian of the last safe city on Earth will cover a lot of ground. To propel you from one location to the next, no matter which destination you’re fighting to recapture, there is the Shrike.

“It swallows the landscape like a bird of prey with an insatiable appetite for scenery; be it the crimson dunes of Mars, the lush jungles of Venus, the dusty craters of the Moon, or the rusted wastes of our own homeworld.”

Destiny is slated to release on September 9th for PS3, PS4, Xbox One and Xbox 360.