The same, but different.

They say a change is as good as a rest, don’t they? Even the most diehard of Call of Duty fans must have been feeling the mega-selling franchise was getting a little staid. Each regular-as-clockwork annual update featured an incredibly brief campaign with a few landmark set pieces and a “controversial” moment or two, tagged onto the main attraction: a tried-and-tested multiplayer mode that boasted little by way of innovation.

With EA’s Battlefield series continuing to challenge COD’s supremacy, and the likes of Titanfall hitting the scene of late, Activision decided to pull out all the stops and take a break from the norm. Thus, Call of Duty: Advanced Warfare was born. It even uses the tagline, “A new era begins now”. 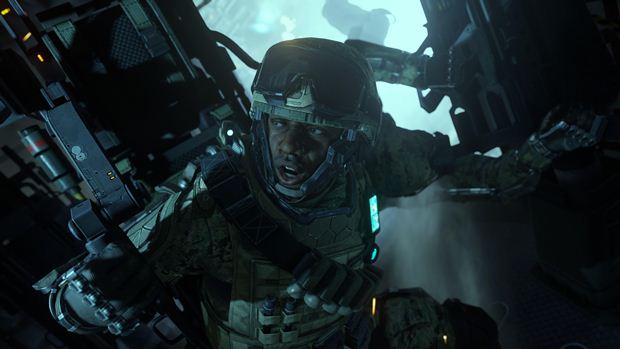 "Campers will have a tougher time now that they can be flanked more easily, and the pace is far more frenetic and fast paced too. Thanks to their newfound manoeuvrability, opponents now have a knack of evading your gunfire!"

Sledgehammer’s take on the cult series is refreshing to say the least; the game is familiar yet quite different.

Set in the battleground of the future, it introduces all sorts of high-tech gadgetry and weapons. I don’t know whether any of these gizmos are available to our armed forces in real life – but some of them certainly should be. There are some brilliant ideas here, from the EM1 rifle that spews out energy beams and never needs reloading to the Threat Grenade that highlights enemies or the Spike Drone that returns to you after firing. But the star of the show is obviously the jetpack-equipped exoskeleton, which transforms you from a standard footsoldier who can run, jump and crouch to a super powerful killing machine capable of cloaking, hovering and jumping huge distances.

Having spent much of this year playing Titanfall, COD’s exoskeleton initially doesn’t feel as powerful, or as liberating, as it might. You can’t wallrun and scale massively tall structures in the same way, or wall-hang for that matter. But while there isn’t the same freedom of movement as there is with Respawn’s debut, the suit’s introduction in Call of Duty means that even those who regularly topped the leaderboards in the previous games will have to learn new skills and rethink their tactics.

Campers will have a tougher time now that they can be flanked more easily, and the pace is far more frenetic and fast paced too. Thanks to their newfound manoeuvrability, opponents now have a knack of evading your gunfire! The many customisations and upgrades allow you to personalise your soldier and adopt a specific play style, which also adds legs and enjoyment to the experience. It takes a while to get used to this new way of playing but stick with it and you’ll have a blast. 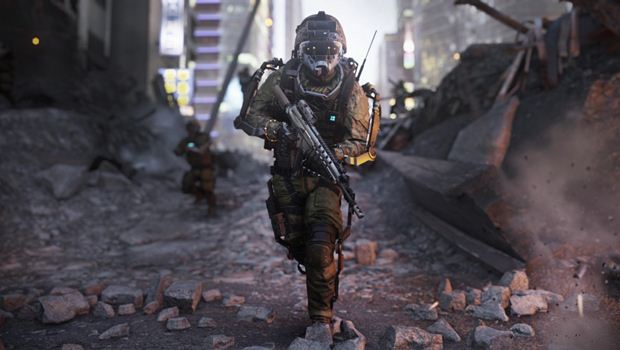 "Sure, there’s still the repetition of the previous games, the ludicrous and slightly lacklustre plot, and the usual multiplayer gripes such as lag but Advanced Warfare is a refreshing take on a well worn genre."

A lot more effort also seems to have been put into the visuals, with the environments nicely detailed and suitably futuristic. The animations and physics have also undergone a decent overhaul since Ghosts and everything looks far more polished.

Kevin Spacey is clearly the headline act with his eerily-realistic visage grafted onto the larger-than-life Jonathan Irons character, and his dulcet tones spewing from his virtual mouth. It blurs the lines between game and movie, and is the best example since Quantic Dream’s Beyond: Two Souls featured a motion captured Ellen Page and Willem Dafoe.

Sure, there’s still the repetition of the previous games, the ludicrous and slightly lacklustre plot, and the usual multiplayer gripes such as lag but Advanced Warfare is a refreshing take on a well worn genre.

Ghosts was largely a poor game and wasn’t a great deal of fun to play. The map packs added some longevity and introduced a few interesting ideas but I struggled to get into either the campaign or the multiplayer. It didn’t look suitably next gen, and it felt slow and one dimensional. Sledgehammer Games’ Advanced Warfare is a different story altogether. It’s a welcome new take on the long-running and ridiculously successful series, and opens a raft of potential updates and game modes in the future. The exoskeleton is a great idea and looks like it might be here to stay.