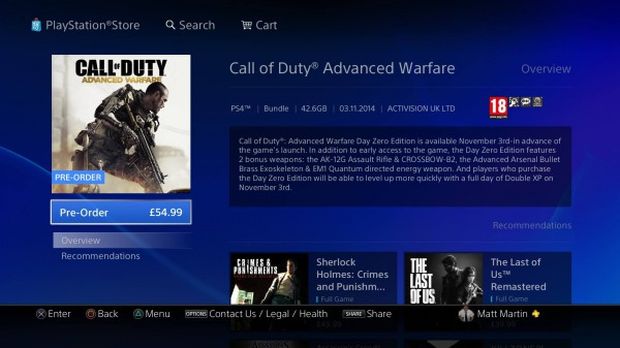 Following the reveal of its file size on Xbox One – which is about 48.84 GB – a PSN listing has revealed how much space the PS4 version of Call of Duty: Advanced Warfare will take up. Clear some space because you’ll need about 42.6 GB free to install the game.

It’s not too surprising, especially coming off of the PC version’s installation size (which is 55 GB for minimum requirements) because Sledgehammer Games have revamped the visuals and textures to take advantage of the PS4 and Xbox One. The PS3 and Xbox 360 versions are being handled by High Moon Studios and are expected to have lower file sizes to reflect their downgraded visuals.

Call of Duty: Advanced Warfare releases on November 4th for Xbox One, Xbox 360, PS3, PS4 and PC worldwide. Are you looking forward to it? Let us know your thoughts in the comments below along with whether this file size seems right or not.