A worthy successor to Vengeance.

Call of Duty: Black Ops 2 has had a long good run. Its non-traditional take on Call of Duty DLC has been an interesting and well-presented strategy that’s kept gamers engaged and excited. Each new addition to the franchise has extended and kept the franchise in really good shape and the need to try something new has really proved how remarkable the series is and why gamers find it so addictive.

Activision have really decided to go out with a bang so to speak with their last downloadable content for Call of Duty Black Ops 2. Titled Apocalypse the DLC will be available to Season Pass owners otherwise will cost £10 ($14.99). Apocalypse mixes things up by introducing two new multi-player maps, two re-skinned favorites, and a new zombie mode.

Set in an alternative version of World War 1, Origins is not only the title for this creepy and deranged zombie-swarmed environment but is also the beginning of the saga of when the original characters first met. Described by Treyarch as Diesel-Punk action, Origins does an impressive job of blending 1950s Sci-Fi with the horrific nightmarish elements of a traditional zombie flick. 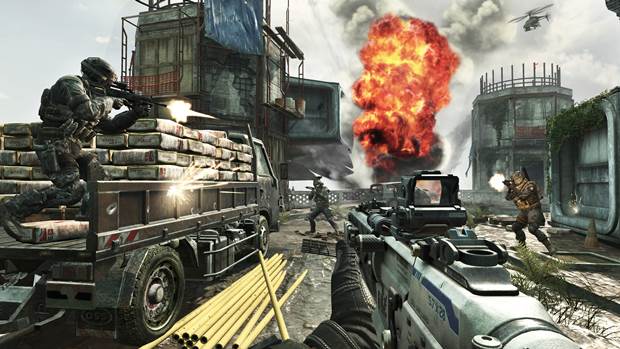 While appearing as nothing more than just muddy and snow filled war trenches swarmed by corpses and hordes of zombies, Origins is really three environments in one. Ruined and ancient structures provide a mystic and supernatural characteristic, while the icy setting of bunkers and graveyards complement its Sci-Fi assets such as futuristic power generators.

"Did I mention the robots? Skyscraper high robots traverse the land as you battle the undead, but despite their enormous size it’s rare you’ll get steeped on. "

Did I mention the robots? Skyscraper high robots traverse the land as you battle the undead, but despite their enormous size it’s rare you’ll get steeped on. Your real focus are the zombies hording in you and the key to survival lies in team work in order to carry out the mission goals.

Making your way through the map, you earn points for each action you participate in and it’s your job as a team to spend those points wisely. Sacrificing points to turn on the six generators placed throughout the map so you can escape this nightmare would be a pretty good start. Each generator that’s switched on gives the players a choice of perks. These include the mystery box and the perk-a-cola machines that will provide an advantage as the zombies weigh in on you. 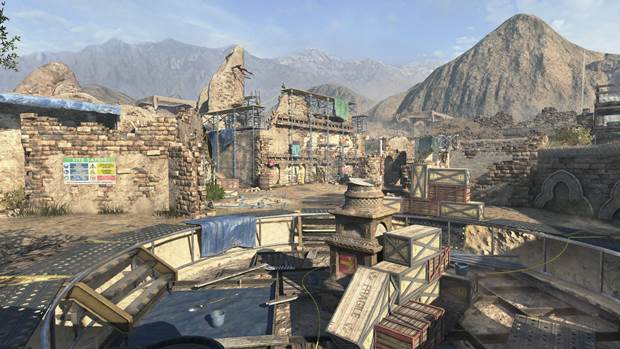 In addition to zombies which are no mean feat to overcome by the way, mechanical soldiers known as Panzer Soldat also want you dead, and being equipped with flamethrowers are sure to make that happen. It’s best to keep your distance and go for headshots as the rest of their bodies are fully armoured and impenetrable. Origins is a refreshing take on zombies mode and it provides a fair yet punishing level of difficulty.

"Lack of hiding spots and camping situations mean it’s best to play it safe and keep moving. I use the word “Safe” here very lightly as its very unpredictable."

The Online multiplayer of headshots, kill streaks, and ranking obsession is the core strength of the fanbase, and what would it be without any additional maps. After spending 3 hours in this open space death sentence our first map Dig is just as fun if not better than the original Courtyard which is taken from Call of Duty: World at War. Dig uses an open space environment filled with sandy ditches, torn shelters and strategic routes placed round the outside of the map.

Lack of hiding spots and camping situations mean it’s best to play it safe and keep moving. I use the word “Safe” here very lightly as its very unpredictable. I favoured team deathmatch on this map as the adrenaline rush of constant kills and surprises are engaging and addictive. As there is no shelter available during air attacks mean you’re pretty much screwed. 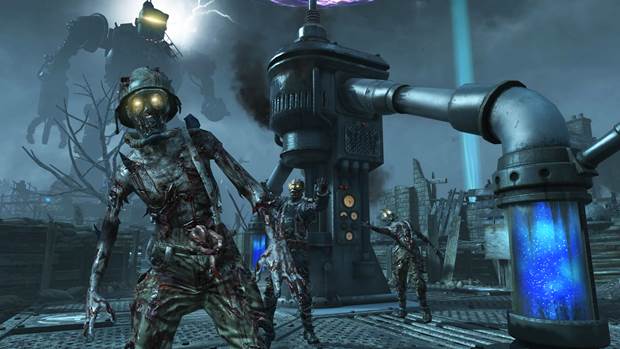 Set on a hovering ship in the middle of the ocean our second map is a direct cut and paste formula of Stadium from the original Black Ops. Every environmental asset has been ported over and reskinned with futuristic elements and topics to keep in line with its futuristic theme. The only real difference is the rocket ship getting ready to take off at the rear of the ship.

"Takeoff plays out in the same fashion as Stadium meaning those who liked or disliked it will no doubt feel the same way. "

Takeoff plays out in the same fashion as Stadium meaning those who liked or disliked it will no doubt feel the same way. With the exception of frustrating sniping spots it caters well to any type of player and their weapon choices. Sniping spots have always been a hot subject of debate surrounding Call of Duty and will most likely remain that way.

Taking place in a cold drizzly town in Europe is our third map. Plagued by ankle high snowstorm Frost is a blizzard of adrenaline. The rush that Frost delivers along with its chilling atmosphere is a shotgunner’s dream as it caters itself to fast paced action and surprises. The snowstorm adds a level of immersion that other maps lack and would have been nice to see this on a larger scale.

Frost separates itself into two locations linked by a frozen river and bridges allowing players to engage in long range combat. Packed with tight corners and open buildings the best thing to do is keep moving with the trigger finger at the ready position. Frost offers locations to hide with store windows and open buildings, but as the entire map kept to ground level the verticality is non-existent. 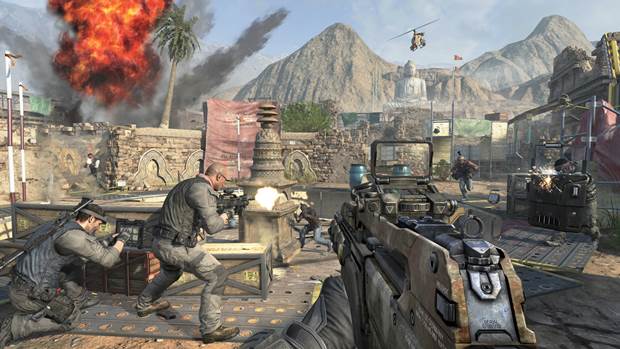 This works with its design as it wants you to keep moving and stay on alert. The map gives many options for flanking and placing traps thanks to accessible interiors and it really places an emphasis on close combat. While this is similar with Dig both differ highly as Frost delivers constant action, diversity and strategic manoeuvres.

"Pod does a terrific job of blending close quarter combat while holding attention to space, offering up plenty of routes to traverse."

Our final addition to this well-designed content is based on a post-apocalyptic Utopian village that’s been abandoned and left to ruins. Placed upon the edge of a cliff with pod like homes and buildings, Pod is the map that I personally favoured for its options to combat and its visual aesthetics.

Pod does a terrific job of blending close quarter combat while holding attention to space, offering up plenty of routes to traverse. I do feel that Pod could have been improved and played a little more with verticality. Due to its semi-open nature assault rifles seemed to be the best option.

Call of Duty: Black Ops 2 Apocalypse acts as a pretty solid successor to Vengeance and even though some of the maps are just re-skinned versions of the old ones it should still be able to satisfy the hardcore Call of Duty player.

This game reviewed on the Xbox 360.

Apocalypse serves as a fitting end to the game’s additional content both in its name and what it offers. The star of the show is the new zombies mode 'Origins' and this is primarily down to its visual appeal and level of fun that it offers to the player.

While the four new maps offer up a fair selection of variety, each one felt as if they were missing something and the need to have two re-skinned maps felt unneeded.

Despite some maps being re-skinned from the previous games, Apocalypse still should be a solid option for hardcore Call of Duty fans.

A copy of this game was provided by developer/publisher for review purposes. Click here to know more about our Reviews Policy.
Tagged With: Call Of Duty: Black Ops 2, call of duty: black ops 2 apocalypse, pc, ps3, Treyarch, xbox 360