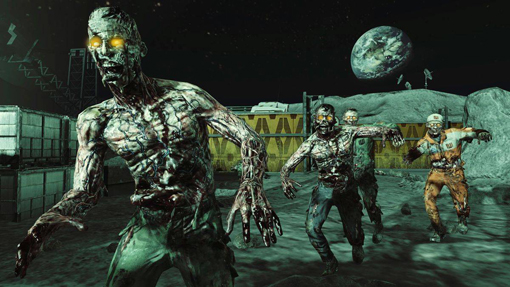 The ‘Rezurrection Map Pack’ for Call of Duty: Black Ops, is now available on the Playstation 3 Network for download and Windows PC.  Having being previously only available on the Xbox 360, now available for everyone is the new Zombie Map ‘Moon’, which pits you up against zombies in space for the first time.  You have to give it up for Treyarch as far as originality goes for this map, as you rush to get your space suit on before you run out of oxygen as the map starts.

The map pack also features all the Zombie maps that were in Call of Duty: World at War including, “Nacht der Untoten”, “Verruckt”, “Shi No Numa” and “Der Riese”.   If you purchased the Hardened or Prestige Edition of Black Ops the map pack is free otherwise it will run you $15.00.  The soundtrack has also been enhanced to include the song ‘Nightmare’ by Avenged Sevenfold as well as a new theme available.  You can view the full press release below.

Moon features all-new weapons, futuristic gear and hordes of low-gravity loving undead, delivering Black Ops’ deepest and most intense Zombies experience yet. Meanwhile, strengthened with the firepower and visual splendor of Black Ops, players can relive the nightmare of “Nacht der Untoten,” escape the zombie madness in the asylum of “Verruckt,” battle back the undead Imperial Army of “Shi No Numa,” and pull the plug on “Der Riese,” the zombie factory that started it all.

“The enthusiasm of our incredibly loyal Zombies community is infectious,” said Treyarch Studio Head, Mark Lamia. “With Rezurrection, we are delivering to our fans the most comprehensive Zombies content package so far, with four critically acclaimed Zombies experiences, plus our latest creation Moon, the biggest and most elaborate Zombies adventure yet.”

For our fans who purchased the Black Ops Hardened or Prestige Editions for the PlayStation 3 system, and have already downloaded the Classic Zombies Pack with re-mastered maps, Rezurrection can be downloaded via the in-game store or through the PlayStation®Store for free.  This includes Moon, the Zombies Soundtrack and the Moon Theme.

Treyarch is also delighted to announce that they have once again partnered with hardcore Call of Duty fans and rock superstars, Avenged Sevenfold, featuring their classic track, Nightmare, in Rezurrection’s Moon level.

To mark the release of Call of Duty: Black Ops Rezurrection on the PlayStation 3 system and Windows PC , the team will host Double XP from Friday, September 23rd through Monday, September 26th.

Developed by Treyarch and published by Activision Publishing, Inc. (NASDAQ: ATVI), Call of Duty: Black Ops is rated “M” (Mature) by the ESRB for Blood and Gore, Intense Violence and Strong Language. PS3 players who purchased the Call of Duty: Black Ops Hardened or Prestige Editions can download Rezurrection in its entirety for free by going to the in-game or PlayStation Store. For full details on download options, please visit http://www.callofduty.com/intel/492 for in-depth instructions.

For additional Call of Duty updates and information, visit us on the web at www.callofduty.com/blackops, www.facebook.com/codblackops, and also via Twitter @Treyarch.

Call of Duty and Activision are registered trademarks of Activision Publishing, Inc. All other trademarks and trade names are the properties of their respective owners.

Windows PC is a registered trademark of the Microsoft group of companies.