Not one, but TWO collector's editions. 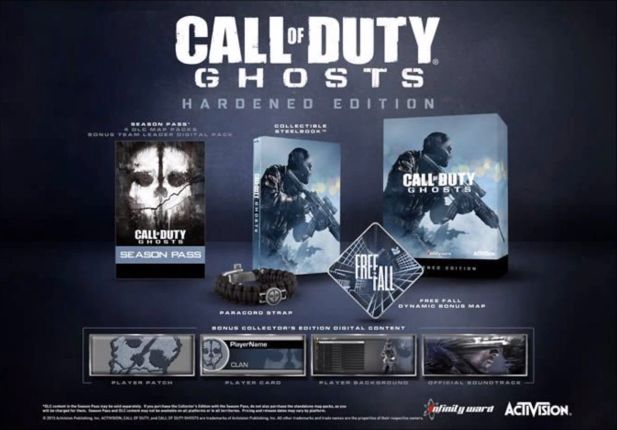 Activision’s upcoming entry in its long running, bestselling Call of Duty franchise, Call of Duty: Ghosts, is getting a special limited Collector’s Edition, and it is now available for pre-ordering.

There are two Collector’s Editions available: the Hardened Edition comes with an assortment of collectible physical items and exclusive digital content to customize the multiplayer experience. Included in this pack are a paracord strap, a collectable steelbook, a Season Pass and a bonus dynamic map ‘Free Fall’, as well as other digital content such as themed player backgrounds, player cards, player patch and official Ghosts soundtrack.

The Prestige Edition is, like every year, the ultimate Collector’s Edition. It has the same great content as Hardened Edition, but in addition, it also comes loaded with a mountable 1080p HD Tactical Camera which is shock proof, water resistant and features a 170° wide angle lens and comes equipped with three attachments so you can take it anywhere you go.

That isn’t it as far as Call of Duty festivities go: to celebrate the launch of Ghosts, Activision will also be having a Double EXP weekend that will run from November 8 to November 11.

Call of Duty: Ghosts launches on the Xbox 360, PlayStation 3, Xbox One, PlayStation 4, Wii U, and PC this November.