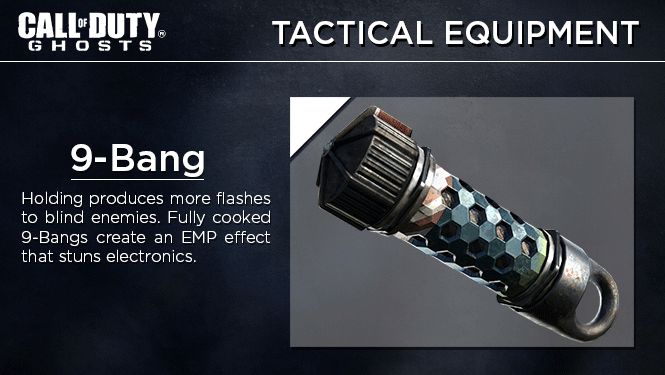 A new tool has been revealed for multiplayer in Infinity Ward’s upcoming Call of Duty: Ghosts. If you thought a regular flashbang was lethal, then wait till you try the 9-Bang.

Essentially, the 9-Bang will produce a larger number of flashes depending on how long you cook the grenade. A fully cooked 9-Bang will release a blinding flash along with an EMP effect as well, thus shutting down nearby enemy defenses in the process. That includes Sentry Guns, I.M.S. devices and more.

Multiplayer Lead Tom Wells stated, “The 9-Bang’s power system challenges players to plan ahead and think more tactically when engaging enemies. Caught unaware? You can still toss it right out like a traditional flash grenade in a hurry. Prep a fully charged 9-Bang, however, and you’ll disrupt defenses in a big way.”