Legacy Edition of Infinity Ward's next to include Call of Duty 4 remaster?

Things are getting slightly ridiculous with Infinity Ward’s next Call of Duty, reportedly called Call of Duty: Infinite Warfare. Ever since reports yesterday indicated a May 3rd reveal courtesy of retail listings, information has begun arriving from all quarters regarding the game.

The latest report comes from Reddit which features an image of a pre-order card (originally circulated through Snapchat) for the Legacy Edition of the game from Target. Along with a release date of November 4th and the game’s cover art, it indicated that those who pre-ordered the Legacy Edition of Call of Duty: Infinite Warfare would receive a remastered version of Call of Duty 4: Modern Warfare. Up till now, neither Activision nor Infinity Ward have hinted at a remastered version of the 2007 classic.

Again, take all of this with a grain of salt until official confirmation arrives. What are your thoughts on it though? Let us know in the comments below. 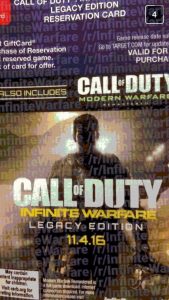