There was just something about arcades. Dark, sometimes dirty, often huge rooms full of dozens and sometimes hundreds of machines, each hoping its screen would catch your eye and claim your quarters. You’ve always find players lining up waiting their turn on the most popular games, that one guy absolutely bodying everybody who lined up against him in a fighter, groups huddled around counting their quarters, trying to figure out the best way to spend what they had while maximizing what they wanted to play.

If you grew up in arcades like I did, you know that one of the great tragedies of that era is how many of those games are lost to time, unable to be easily accessed or played by modern audiences. Capcom Arcade Stadium is the latest collection to attempt to address that issue. It’s always good to see a collection with, but it’s even better when they’re presented with the level of love and care that Capcom Arcade Stadium is. 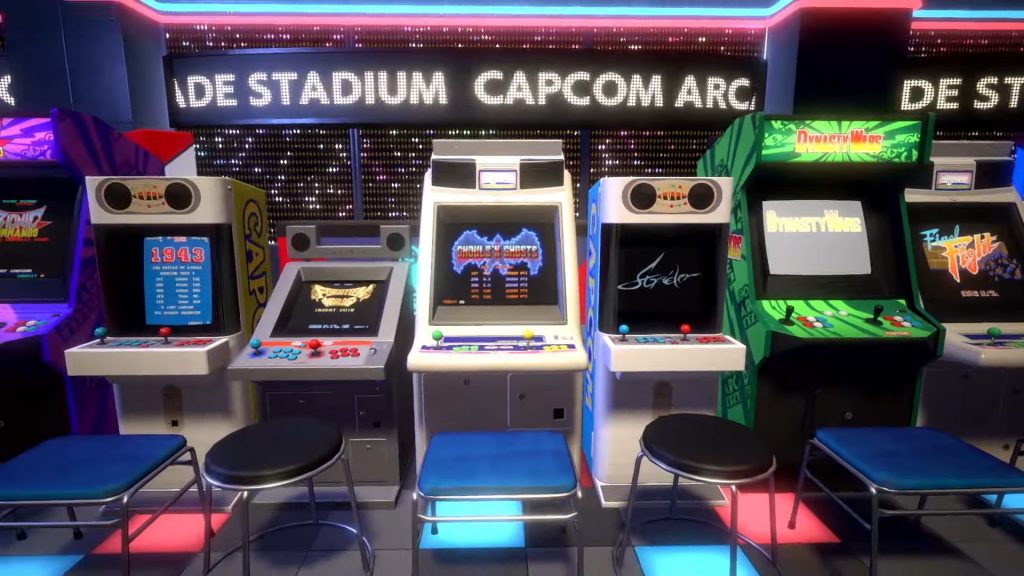 "You can change each game’s difficulty, the number of lives you start with and what score will reward you with a new one, and even the game speed, speeding up and slowing down as you wish. By far the nicest option is the ability to rewind games on the fly allowing you to try tricky spots over again. "

Selecting a game is like walking through an arcade, as you pass by cabinet after cabinet, each playing its attract screen. Once you select a cabinet, you’ll be able to determine whether you want to play the English or Japanese version of the game (unless there is only one version included). You even get to insert a coin by pressing in the right stick to start things off. Other little things sell the atmosphere, as well, like the stick on the cabinet moving should you move your own. There’s even a control setting specifically designed for playing with arcade sticks, if a controller just doesn’t do it for you.

All of the little details are nice, but there’s plenty of modern conveniences, too. You can adjust each game’s appearance, adding filters that mimic scanlines, smooth pixels, curve the display, or some combination thereof. You can run the games in an arcade cabinet, with borders featuring art from games in the collection, or even at a widescreen resolution if you don’t mind a little stretching difficulty.

Capcom Arcade Collection also features accessibility and difficulty options; you can change each game’s difficulty, the number of lives you start with and what score will reward you with a new one, and even the game speed, speeding up and slowing down as you wish. By far the nicest option is the ability to rewind games on the fly allowing you to try tricky spots over again. 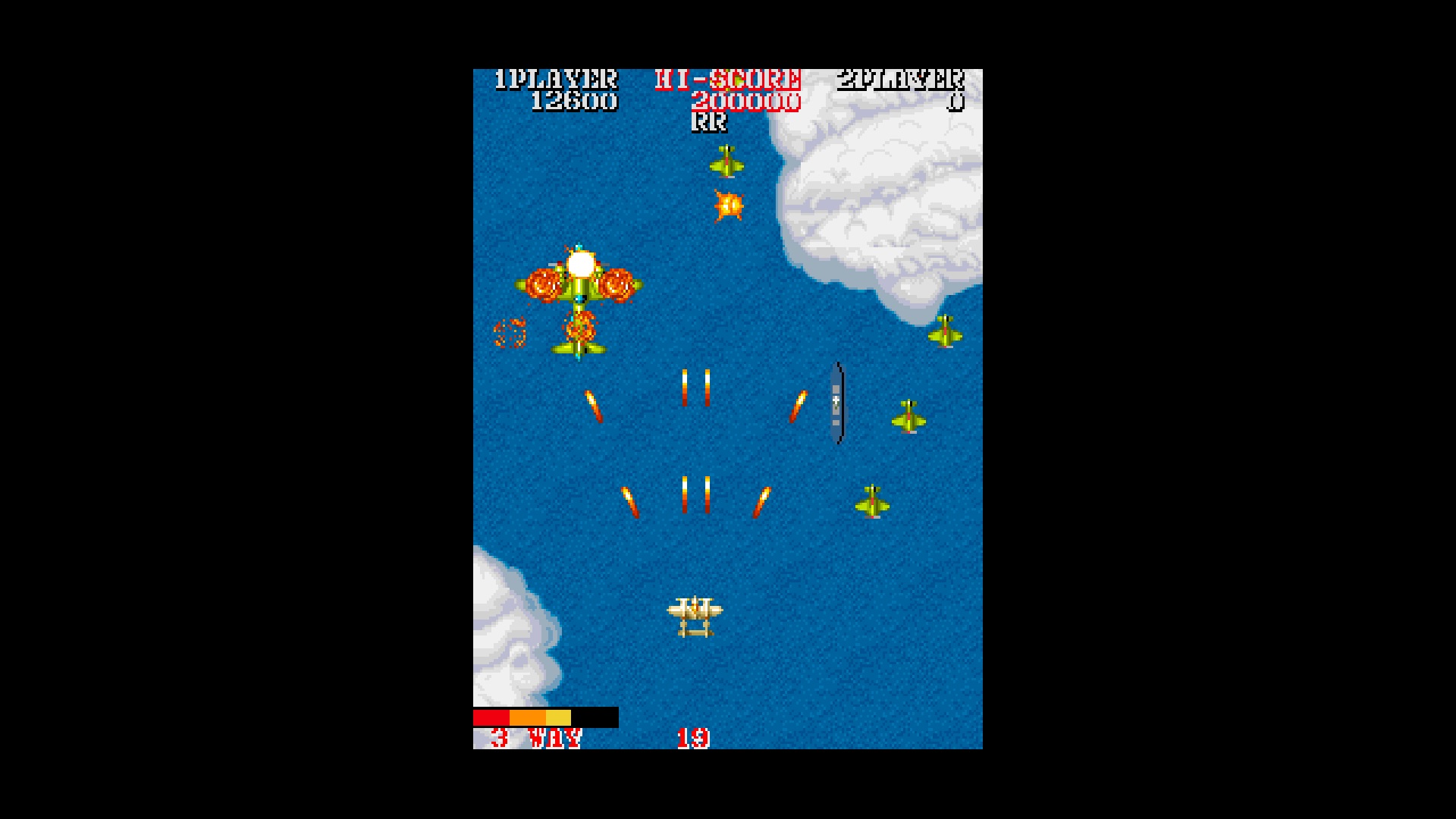 "The collection also supports 30 slots for save states, local multiplayer, whether via tag team (one player plays, and then the other) or co-op, and online score challenges."

The collection also supports 30 slots for save states, local multiplayer, whether via tag team (one player plays, and then the other) or co-op, and online score challenges. All of the game’s options are explained in an in-depth tutorial that pops up whenever you use a new feature and can be accessed at any time from the main menu if you need a refresher.

Each game also comes with a detailed game manual that explains the control scheme, how to play, power-ups, character move lists and abilities, and more. Capcom Arcade Stadium is certainly dedicated to preserving these classics, but it also makes them more accessible than ever, too. That’s nice, given that these titles were designed to eat your quarters, not make life convenient for the player.

All right, so the games are well-presented, but how do they play? Well, that depends. The emulation is great across the board, but the quality of the games is a bit hit and miss, even if it is nice to see all of these titles on modern platforms. There are 32 games currently available in the Capcom Arcade Stadium. The initial download comes with 1943. Three other packs, each of which has ten games apiece can be purchased individually, or at a discount when purchased together. The final game, Ghosts ‘n Goblins, must be purchased individually. 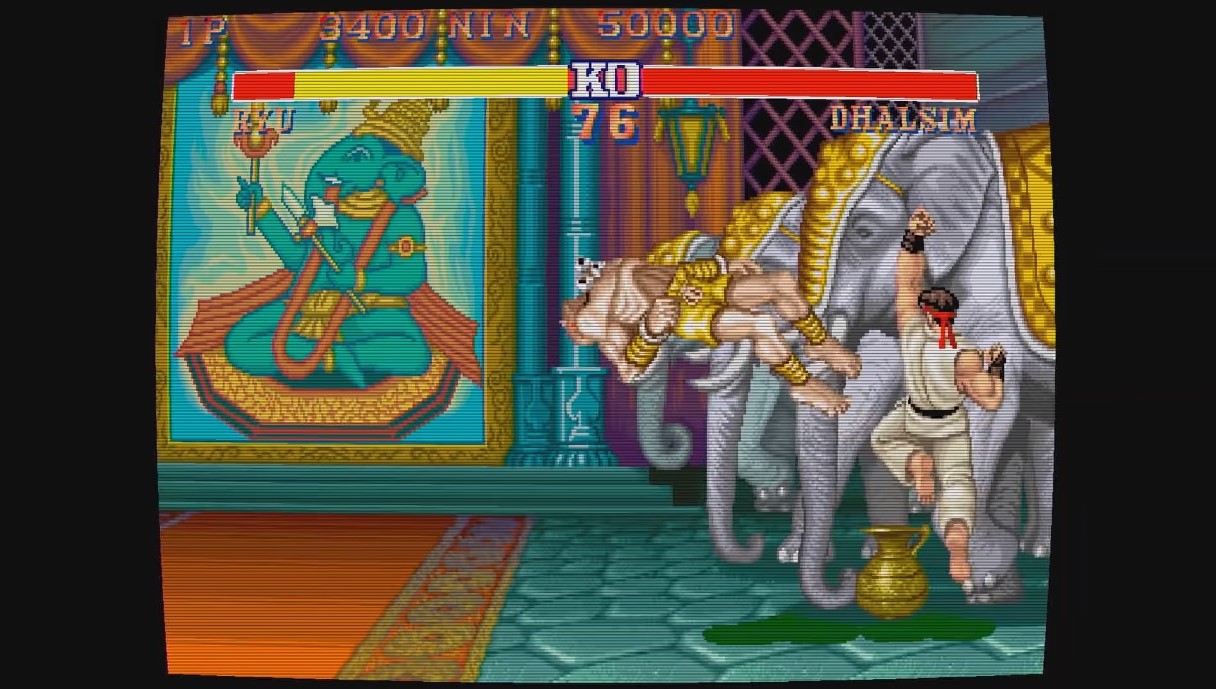 "Pack 3: Arcade Evolution, which covers games released between ‘92-’01 is easily the strongest of the bunch."

Pack 3: Arcade Evolution, which covers games released between ‘92-’01 is easily the strongest of the bunch. The pack includes two versions of Street Fighter II – Hyper Fighting and Turbo – both of which are excellent, though playing them makes it clear how far fighting games have come since their release. Cyberbots: Full Metal Madness, fighter featuring mechs, is also included. I’d never heard of the game before, but it plays pretty well and it’s an exciting change from what you’d expect out of a Capcom fighter.

It also includes three excellent beat-em-ups. Warriors of Fate is a sequel to Dynasty Wars, which appears in Pack 2, and is a superior game in about every way. Strategic Variant Armor Equipment is the only beat-em-up I can think of that lets you fight in mech, and it’s pretty great. Strangely, only the Japanese version is included here, even though the game was released in the West as Armored Warriors, but it doesn’t matter much when the game’s this good. Battle Circuit is the weirdest here, which allows players to take on the roll of an ostrich, an alien, or a shapeshifter. It’s wild stuff, but like every Capcom beat-em-up, a pretty good time.

The pack rounds things out with three shmups, all of which are very good. 19XX: The War Against Destiny and 1944: The Loop Master are further refinements of the already excellent 1942. My favorite of the 4 was Giga Wing, a top down number that features screen-filling special attacks and a shield mechanic that allows you to reflect bullets back at enemies. Progear, which has never been previously released on consoles, is a horizontal steampunk-themed bullet hell from CAVE, is another standout.

Pack 2: Arcade Revolution, which includes games from ‘89 to ‘92, is also strong, though many of its titles have successors in Pack 3. Street Fighter II is here, which is nice for the sake of completeness, but if you want to play Street Fighter, you’re better off sticking to Turbo and Hyper Fighting. There are also some beat-em-ups here, including the excellent Final Fight, Captain Commando, and Dynasty Wars, though as stated, Warriors of Fate is superior.

There’s also three shmups, including 1941: Counter Attack, a sequel to 1942. Varth Operation Thunderstorm is its own sci-fi inspired thing, but you don’t have to look far to see the influence of 1942. The highlight for me was Carrier Air Wing, a side-scroller that is a bit more realistic and tasks the player with managing money to purchase offensive and defensive upgrades.

Action platformers Strider and Mega Twins are also in this pack, and while they’re class titles, especially the former, the difficulty and simplicity of the gameplay will likely turn most off. The real sleeper of this pack, though, is the excellent run-and-gun title Senjo no Okami II, a sequel to Commando. Only the Japanese version is included, but it’s hard to complain about a top-down shooter that’s this good. 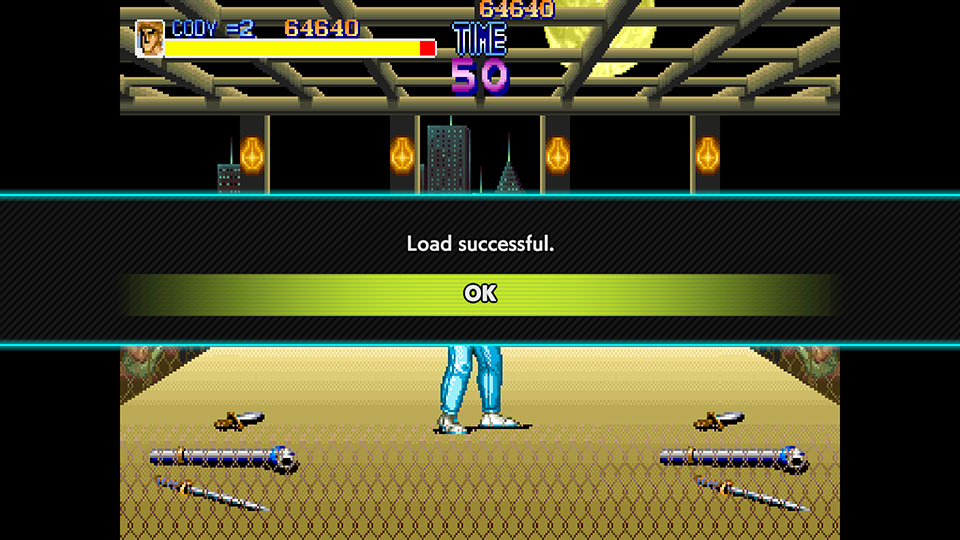 "Overall, I’d say Pack 3 is the strongest, followed by Pack 2. I’d be hard-pressed to recommend Pack 1 to anyone other than completionists or folks who already know they love those games."

Then there’s Pack 1: Dawn of the Arcade, which covers games from ‘84 to ‘88. The games included here are historically significant, but they’re largely interesting for historical purposes rather than being games you want to play. Ghost n’ Ghouls plays the best of the platformers included, but it’s so difficult I can’t imagine most people enjoying it. Bionic Commando and Tatakai no Banka are also here, but they’re more important than enjoyable.

Commando and Pirate Ship Higemaru, a game where you throw barrels at pirates, are interesting, but the former has a superior sequel in another pack and the latter is unlikely to keep anyone’s attention for long. The shooters – Vulgus, Section Z and Forgotten Worlds – are held back by their age, and aren’t as good as the other shooters and shmups in other packages. 1942 is there, as well, but 1943 is better and free. The most interesting one is Legendary Wings, a shmup that also features on-foot side scrolling sections. It’s not a bad game, but it doesn’t excel at anything, and again, there are better games in the collection.

Overall, I’d say Pack 3 is the strongest, followed by Pack 2. I’d be hard-pressed to recommend Pack 1 to anyone other than completionists or folks who already know they love those games. They’re not bad, by any means, but the alternatives are simply better. And then, of course, there’s Ghosts n’ Goblins, which is as excellent and hard as you remember. 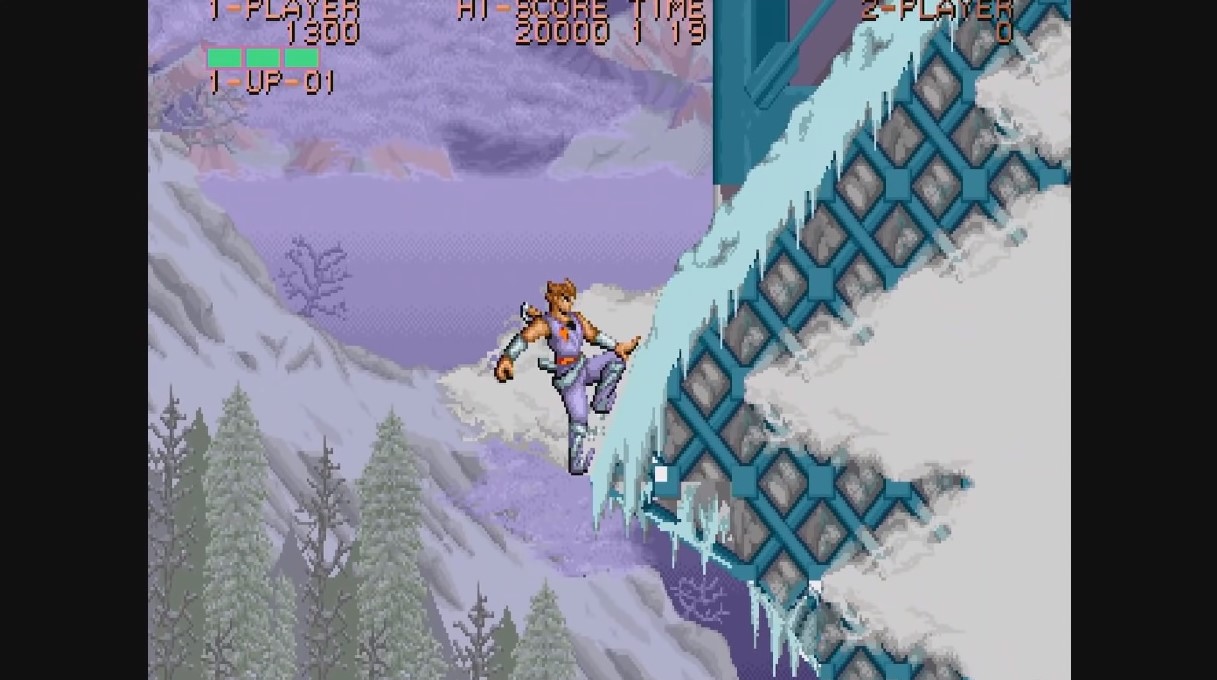 "Capcom Arcade Stadium made me feel like I was walking around an arcade again, this time with a pocket of quarters that would never run out. And that’s pretty magical."

Capcom Arcade Stadium is very good, but it does have flaws. The most notable is the lack of online play, which would have been really welcome for most games, but especially the beat-em-ups and fighting games. It’s also rather strange that the collection doesn’t include a museum mode with concept art or promotional materials, which have been included in previous Capcom collections. The other flaw is the lack of certain titles, most notably Street Fighter III and several licensed games like Marvel vs. Capcom. The latter is understandable, but I would have rather had Third Strike than one of the versions of Street Fighter II. We only hope that Capcom will decide to release more games for the collection in the future.

Still, what’s here is an excellent collection for retro enthusiasts, and it’s all put together very well. There are a ton of wonderful games to play here, and they’ll keep you entertained for hours, especially if you have friends to play with locally. If nothing else, Capcom Arcade Stadium made me feel like I was walking around an arcade again, this time with a pocket of quarters that would never run out. And that’s pretty magical.

A ton of quality fighters, shmups, and beat 'em ups. A beautiful UI that mimics being in an arcade. Fantastic emulation. Native support for arcade sticks. A ton of visual, accessibility, and difficulty feature. The rewind feature is a godsend.

No museum mode. No online play. Some notable titles are missing.

Final Verdict:
GREAT
While it lacks online play and is missing a few major titles, Capcom Arcade Stadium's incredible emulation, wonderful UI, and plethora of accessibility and difficulty options make it an excellent way to play several of yesteryear's best games.
A copy of this game was provided by Developer/Publisher/Distributor/PR Agency for review purposes. Click here to know more about our Reviews Policy.