Fancy a bit of a trip down memory lane? Xbox 360 owners who have not already splurged on these eight classic XBLA titles could do far worse than grabbing the Capcom Digital Collection. The eclectic mix ranges from the sublime to the ridiculous, and includes hits such as Super Street Fighter II Turbo HD Remix and Wolf of the Battlefield: Commando 3… and a few more forgettable titles.

What you do get on this shiny disc though, is value for money. At a budget price, this is far friendlier on the pocket than downloading each game individually – and there’s certainly plenty on there to keep you happy for a few hours. All the games are identical to their downloadable cousins. The majority of them are decent games too, although there are some stinkers in the package. 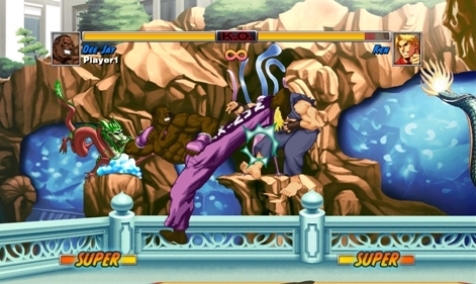 At a budget price, it’s almost worth it for Street Fighter alone

The ultimate 2D beat em up, Super Street Fighter II Turbo HD Remix, bounds back to our screens with a reinvigorated 1080p HD feel. It’s instantly accessible and brings back those halcyon days when it first emerged in the mid-1990s. Grab a friend and it provides hours of fun – or try your hand against all the pros online.

Top-down shooter Wolf of the Battlefield: Commando 3 is another cracker. Commando was one of my favourite games back in the day and here it’s been given a loving overhaul. With its cartoony graphics and huge armoury, there’s plenty of fun to be had. Besides going it alone, it can also support up to three players and sees you take on hordes of enemy soldiers. If you fancy a bit of inane running and gunning, this fits the bill nicely. 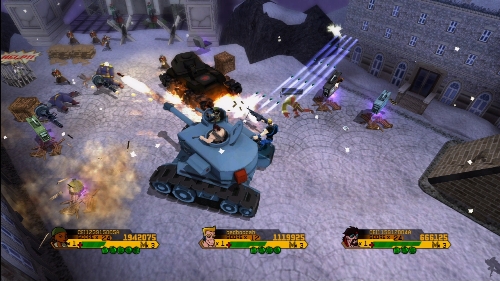 1942: Joint Strike will be welcomed by fans of 1942, 1943, Flying Shark, Banshee and all those other plane shooters from yesteryear. It’s brief and simplistic but it retains the charm that made this type of game so popular dating back to the 8-bit days. Wave after wave of enemy fighter planes fly onto the screen from all directions, with a hail of bullets fired in your general direction; it’s down to skilful movement to avoid collisions. Huge bosses appear now and again, requiring a fair bit of punishment before they perish. There are loads of guns and big explosions – but it is painfully short.

We gave Bionic Commando Rearmed 2 and the return of Nathan “Rad” Spencer a very positive review when this side-scroller hit XBLA. With his bionic arm and a load of weapons and grenades, Rad has to take on the might of General Sabio who’s planning a missile attack. The colourful island of Papagaya is the setting for this retro action game and, besides the occasionally fiddly controls, it’s a fantastic tribute to the past.

Nostalgia-wise, Final Fight Double Impact almost brings a lump to your throat. Of all the games on offer, it certainly seems the most dated – and just to add to the retro feel, the game screen is presented like an old arcade cabinet. It’s a simple affair, with your chosen hero – Guy, Cody or Haggar – punching and kicking his way from left to right across Metro City to rescue Haggar’s very pixelated daughter. For added value, gamers will also be able to try their hand at classic title Magic Sword. 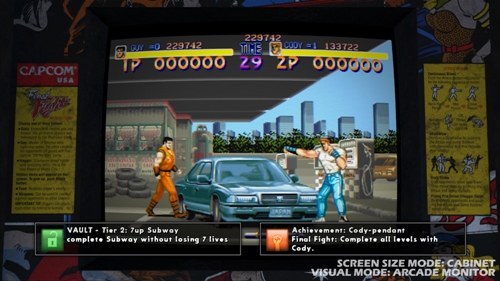 Among the biggest disappointments on the disc is Rocketmen: Axis of Evil and its expansion pack, It Came From Uranus. It’s yet another twin stick shooter but this one is plagued by a rotten camera, copious cutscenes and a tedious storyline. On the plus side, it looks rather decent, there are loads of weapons and you can drag a few friends along for the ride. Ultimately though, this was probably the game that occupied the least of my time.

If you’ve had your fill of fighting then what about herding sheep and other cutesy animals? Flock! is a great little puzzler that puts you in control of a UFO, tasked with rounding up all the critters and cajoling them towards your mothership. Should you complete the 50 levels on offer, you can also create your own thanks to the level editor. It’s a charming game and pretty addictive. 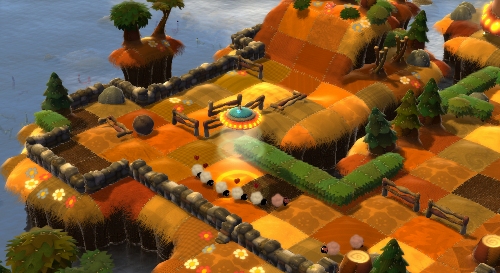 Use your UFO to round up those pesky critters

Finally, there’s Super Puzzle Fighter II Turbo HD Remix, which is a really fun puzzle game that incorporates loads of characters from the Capcom roster. Kind of imitating cult classic Tetris, the idea is to carefully position your blocks to create combos that heap pressure on your opponent by filling their screen. It’s all quite frantic and really enjoyable alone or with firends.

Overall, this is a really strong package. There’s quite a mix of games on here so there should be at least a few titles to everyone’s tastes. Personally, Wolf of the Battlefield: Commando 3 and Bionic Commando Rearmed 2 were the stars of the show for me and really stood out in terms of quality and enjoyment. The puzzle games will probably offer the greatest longevity with their pick up and play appeal, with the others offering a nice reminder of the past – although they do highlight just how much things have moved on. It all amounts to good, clean, inexpensive fun.

Street Fighter, Wolf of the Battlefield and Bionic Commando make this a great purchase alone. There are loads of different game styles and plenty of solo and multiplayer fun to be had

A strange mix of titles and if you've already downloaded any on XBLA, it's questionable whether this will be an essential purchase

Final Verdict:
SUPERB
Capcom combines eight classic titles and shoves them all in one box. The Digital Collection offers something for everyone and it's inexpensive too
A copy of this game was provided by Developer/Publisher/Distributor/PR Agency for review purposes. Click here to know more about our Reviews Policy.