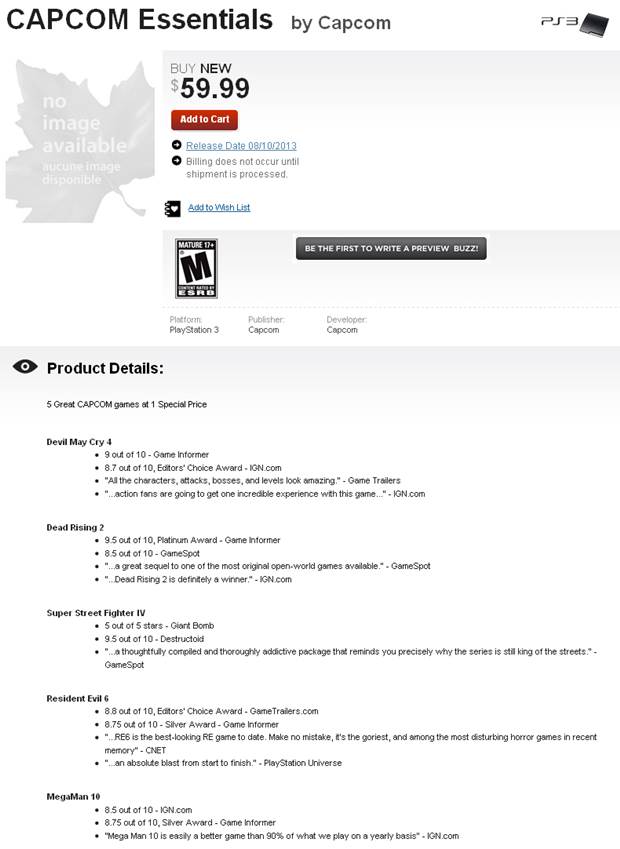 Intentional or not, the cat’s our of the bag for the new Capcom Bundle release, as online retailer, EB Games has posted the details on their company website.

At $59.99, you’d be expecting quite a deal for a bunch of already released games. It looks as though Capcom delivered, packing their PlayStation essentials bundle with exactly that: Some of the most essential Capcom titles ever released.

First on the list is Devil May Cry 4, which received a 9/10 from Game in former and an 8.7/10 from IGN. Devil May Cry 4 was heralded for it’s non-hand holding approach upon it’s release.

Next on the list is Dead Rising 2, an obvious choice and fan favorite series. With Dead Rising 3 soon approaching, we’re sure fans will be clamoring for a replay of the prequel.

Moving on we have Super Street Fighter 4, which won the IGN editor’s choice award, with IGN calling it “a superior version of one of the best fighting games around.”

Resident Evil 6, while it received mixed reviews from aggregate gaming sites, received an editor’s choice award from GameTrailers.com and rave reviews from PlayStation Universe and CNET.

Finally, the list ties up with MegaMan 10, released on the respective online stores for PlayStation, Wii, and Xbox to universal acclaim.

Clearly this bundle of games is packed with geeky goodness. The question is, is this assortment of games going to catch the eye of the general gamer? It’s certainly caught ours.