Hop back into the driver's set for some more pedestrian murder.

You would think many games of the by-gone days of PC gaming wouldn’t be revisited in this day and age. However, with super-violent games like DOOM making a comeback, it was only a matter of time before franchises like Carmageddon also appeared. Stainless Games tried its hand at a new Carmageddon with Carmageddon: Reincarnation and on July 8th it will be releasing a sequel, Carmageddon: Max Damage for the Xbox One, PS4 and PC. What kinds of wanton murder can you look forward to this time around?

GamingBolt spoke to Neil Barnden, brand director and co-founder of Stainless Games, to find out. Warning: There’s a lot of murder that can be committed and it’s oh-so hard to resist. 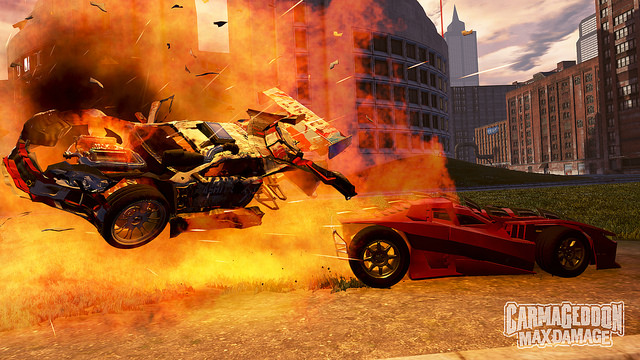 "We’ve expanded the range of soft-tissue targets on offer with entirely new ped classes; wheelchair and mobility scooter peds, and cyclists. There are new ped variations and animals; coyotes, bears, longhorns and aliens."

How difficult was it to follow up on Carmageddon Reincarnation? Were you in a more comfortable position to experiment with the gameplay or was it about polishing what was already there?

Neil Barnden: We’ve been working really hard to make Carmageddon: Max Damage the biggest and best Carmageddon so far, and with our 20 year history with the title, any follow up wasn’t really that difficult!  With all the extra work that’s gone into the game as well as the extra content for the console release I’d say the game is a 40% improvement on Carmageddon: Reincarnation.

How many environments will Carmageddon Max Damage offer and how are they different from the previous game? What new additions and features have been added?

Neil Barnden: 3 new environments: A desert town called Ill Eagle – a big free-roaming level featuring a massive canyon, dam, deadly hover-train and crashed flying saucer. Satan’s Tower; a deathmatch arena perched atop a rock stack, and Beelzebub’s Bottom, a subterranean temple. All the other levels have been improved and enhanced – there are now levels set at different times of day with varying weather conditions, to increase the sense of variety and atmosphere.

We’ve expanded the range of soft-tissue targets on offer with entirely new ped classes; wheelchair and mobility scooter peds, and cyclists. There are new ped variations and animals; coyotes, bears, longhorns and aliens. We have also introduced completely new vehicle types; articulated vehicles and destructible trailers. Every car can hitch up to a trailer, and trailers found parked around the level can be picked up by you or your opponents.

What kind of vehicles can we look forward to this time? How many vehicles are there in total?

What additions and changes have been made to the Career Mode to offer a weightier experience to players?

Neil Barnden: The Career game has five event types. Classic Carma, which is (as the name implies) the “original” Carmageddon event, was the only way to play the game back when Carmageddon first launched. This event can be completed by wrecking all the opponents, finishing all the laps, or killing every ped in the level. 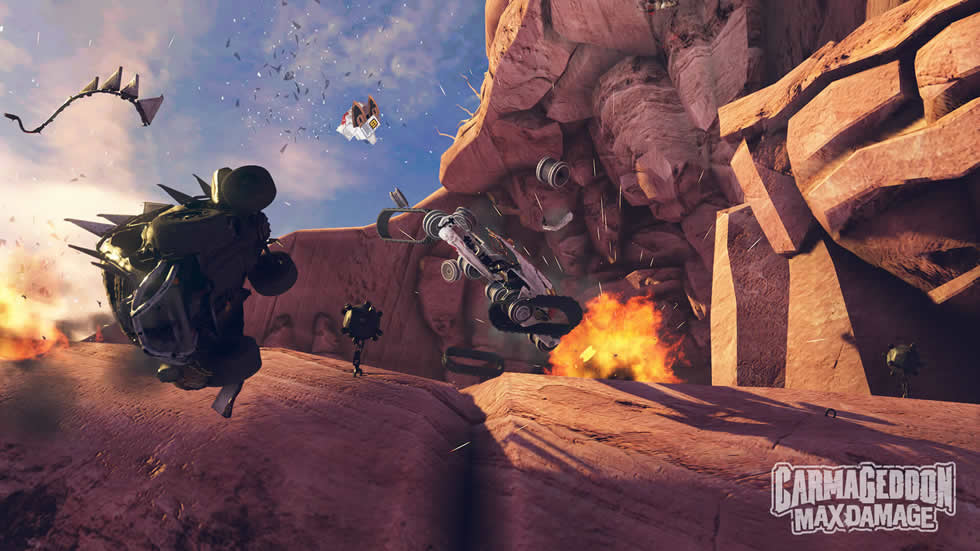 "The game’s damage system is fully real-time and non pre-calculated, and so you’ll OFTEN find yourself having to repair your car. Damage/Repair is so core to the gameplay that we have gone to great lengths to make it as satisfying…"

In Carmageddon: Max Damage, there are four additional event types, which give the player the opportunity to play the sort of driving game they want Carmageddon to be. We have Ped Chase, where a pedestrian is marked with a beacon and the first player to mow them down gets the point, whereupon a new ped is marked and the chase continues.

Next is Fox and Hounds, in which one player spawns as the Fox and everyone else is a Hound, chasing the Fox. Touch the Fox and you become the Fox. While you’re the Fox, your timer is ticking down to zero. The first player to get their timer to zero wins.

In Checkpoint Stampede, a Checkpoint spawns in a random position and all players charge to get there first, win the point and trigger the next random CP spawn. And then there’s Death Race, which is a simple race around a marked route against the opponents.

What spices up these events and gives them their “Carmageddon” flavour is the mechanic of “Points Stealing”, which means that you can steal other player’s points/time/laps by wrecking them.
And finally there’s Car Crusher, which is the Death Match car combat option, where the first player to get the most or required number of opponent kills wins.

We’ve had a lot of really in-depth feedback on all these event types from our dedicated community, and this has allowed us to fine-tune the game to improve the experience of each event. In particular, feedback led to us changing the rules on several of the offensive PowerUps that the game offers – for instance, limiting the maximum number of powerful PUps (such as Opponent Repulsificator and Anvil Launcher) that can be held.

What can you tell us about the Repair System?

Neil Barnden: The game’s damage system is fully real-time and non pre-calculated, and so you’ll OFTEN find yourself having to repair your car. Damage/Repair is so core to the gameplay that we have gone to great lengths to make it as satisfying – and more importantly, entertaining – as possible. So, when parts fall off your car (doors, panels, wheels, suspension parts etc.) they remain where they fell. When you repair, the parts will fly back to reattach themselves to your car – at very high speed. If there happens to be a ped between you and the high-speed flying part, they’ll get hit by the part – and you’ll get a bonus! It’s often fun to drop into Action Replay and find out which part of your car has taken out a ped whilst winging its way back to you.

As well as parts being lost, your car will also get progressively mangled during impacts and the will twist, bend, banana and crush depending on the force/direction of impact. And of course we also had to implement Carmageddon 2 style car splitting (as one of the top requests from the fans). Cars can split across any plane, and often the remaining part still occupied by the driver can still be driven! 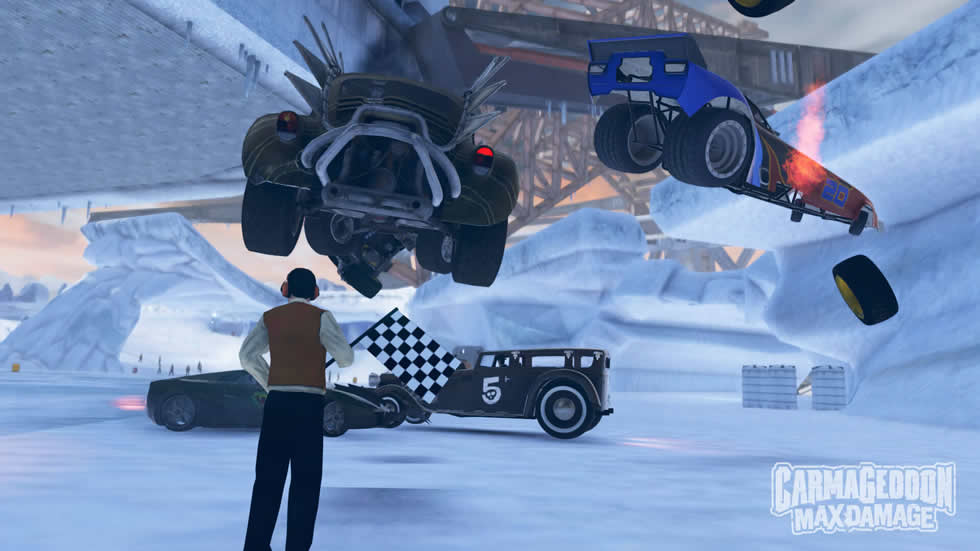 "Continuing funding for the console game has meant continued improvements to both our tech and the game’s content – and so on both fronts the game now stands up to scrutiny and the improvements are something we’re all very proud of."

What new multiplayer modes can we look forward to? Any new additions to previously known modes?

Neil Barnden: As in the Career Game, the MP event types are the same, and benefit from the fine-tuning that has largely been based on fan feedback.

How has the overall net code and balance been improved for Max Damage?

Neil Barnden: It’s simply the case that the additional time that’s been required to develop the console game has allowed continued testing and improvements to the MP game.

Reincarnation seemed to satisfy fans of the older games but it was rated rather low by critics in general. What is your response to the same and how do you address these issues in Max Damage?

Neil Barnden: It’s pretty clear that the number one problem with C:R was how demanding it was on PC hardware, even though the game’s visuals weren’t tremendously detailed. Although the team had worked incredibly hard to improve our rendering engine code to the point where it felt the results were acceptable, it clearly wasn’t good enough. And as a result the game was criticised mainly for its poor frame rate/performance.

Continuing funding for the console game has meant continued improvements to both our tech and the game’s content – and so on both fronts the game now stands up to scrutiny and the improvements are something we’re all very proud of.

Will there be any additional content for the game post-launch? What kind of support can players look forward to in terms of updates?

Neil Barnden: The game has been designed to support DLC, but we aren’t announcing any plans for additional content yet. It also supports modding on PC, and there’s already some excellent content from the community that will no doubt eventually find its way into C:MD. 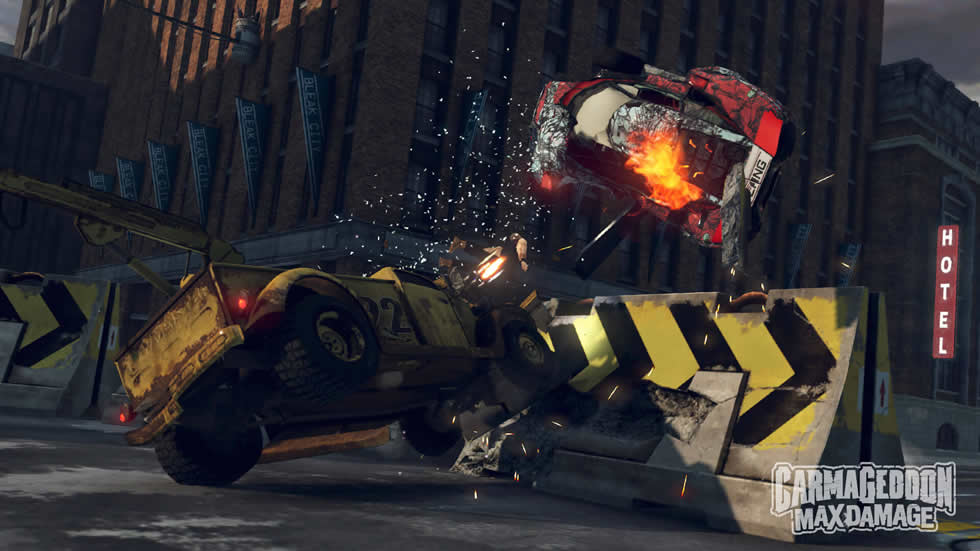 Neil Barnden: The game runs at 1080p/900p on PS4/Xbox One respectively, and at 30fps – in line with a large number of other games in the current console market.

Are there any plans to release a PlayStation VR version of the game?

Neil Barnden: VR is far better suited to 1st person gaming experience than one designed for a 3rd person view. We did recently implement a 1st person view into C:MD (again, as a response to community feedback), but because the cars weren’t designed with this view in mind it’s often a less than perfect experience (albeit fun!). So no – at present we have no plans to do a VR version. It would be better to start from scratch on a new game design, with VR as a focus from the outset.

Furthermore what are your thoughts on PSVR? Do you think it will sell millions?

What does the future hold for Carmageddon? Will there be another sequel or are you working on something else?

Neil Barnden: We want to expand Carmageddon across all platforms including mobile, and continue to build the Brand. So our intention is to look at any way in which we can use the Carmageddon name as the starting point for frantic, fun automotive action.