The entire world is your oyster. Now blow it to hell! 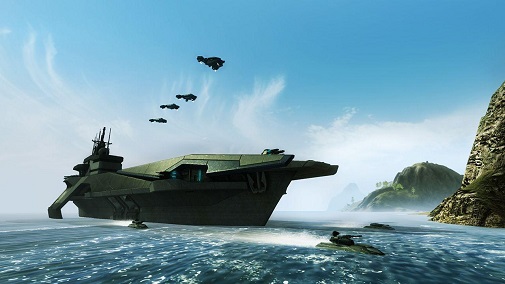 After a worldwide console launch, Bohemia Interactive has released a PC demo for Carrier Command: Gaea Mission. Based on the 1988 title, the demo will introduce players to the unique Carrier Command gameplay across two demo-exclusive assaults on the islands of Thermopylae and Granite.

As per the PR release, “the demo kicks off with an action-packed sequence in which players control one of the amphibious Walruses. Once they complete their first objective, the demo fast forwards to another island. Here, the gameplay opens up and players will be able to switch between driving Walruses, flying Mantas and ordering units via the tactical map.” Overall, the demo’s length is about 45 minutes.

The game is a massive open world consisting of 33 islands with 6 distinct climatic zones. You essentially take command of a futuristic military carrier holding multiple remotely controllable and customizable units. And then you set out to rule the entire ocean-scape or something to that effect.

A Steam and XBox Live release is expected for the demo later.