Cloudpunk Review – A Big Thing in a Small Package

In Cloudpunk, the good and the bad are simply a package deal.

Cloudpunk makes a very compelling first impression. The neon cyberpunk aesthetic, retro-synth soundscape, and purposefully blocky minecraft-esque structural style are an interesting combination of ingredients that, while not particularly unique, do culminate into a pleasing stew that instantly intrigues. The story is focused on it’s main character, Rania, a young woman who has just taken a job as a delivery girl for a somewhat shady company called Cloudpunk, that specializes in delivering packages on time and without asking any questions.

Rania, or 14FC, as she is addressed by her supervisor, a mysterious character known as “Control”, embodies a certain spirit in her character that anyone who’s ever worked a repetitive, dead-end job just to make ends meet will immediately understand and empathize with. She’s not exactly thrilled to be where she is but she’s making the best of it. Picking up and delivering packages as Rania for Cloudpunk is the core of the gameplay. Getting in your HOVA to cross the vast stretches of the cityscape, landing it on the right platforms, and strolling to the package’s destination to hand it off to the recipient is an accurate way to describe the gameplay loop, but to say that’s all Cloudpunk is would be missing the forest for the trees. The real essence of the game is found in the story, it’s characters and slowly soaking in the atmosphere. Over time you get to understand how things work, and while it’s simple on the surface, there is some depth to be found here.

The frame rate, at least on console is best described as reliably unreliable. Interestingly it’s fairly serviceable when you are walking around on the ground but completely takes a nosedive when you start flying around and your HOVA, despite being in the exact same environment. It never quite got into motion sickness territory for me, but if you are particularly sensitive to that sort of thing, it’s probably worth checking to see if it’s been cleaned up with a patch before you purchase the game. At the time of writing this review the PS4 version has not been. It’s a shame that this is an issue for Cloudpunk at this point, but here’s hoping it gets resolved soon.

"The real essence of the game is found in the story, it’s characters and slowly soaking in the atmosphere. Over time you get to understand how things work, and while it’s simple on the surface, there is some depth to be found here."

Speaking of walking around you can do it in three different perspectives most of the time. A fixed camera angle from far away, a more traditional 3rd person angle that you can control, and a first person view. Cloudpunk never really does much to make one camera style preferable to another, so it’s really just about your preference. I appreciate the options, but I mostly found the regular 3rd-person angle to be the best balance most of the time.

The two main hemispheres of Cloudpunk’s gameplay are somewhat unbalanced in their importance, and not in the way you might suspect at first. Flying the HOVA is fine, and serves as a nice excuse for the game to give you little drips of exposition, but the game is actually far more interesting while you’re on foot, picking up objects, observing the tone of the world, buying things for your apartment, and interacting with the slew of fascinating characters. Cloudpunk’s NPC’s go a long way towards building this world with unique designs, great writing, and mostly fitting into one of three categories; Taking advantage of society’s shortcomings for their own gain, being victims of it, or doing their best to hold things together with duct tape, hopes, and dreams. All of these character archetypes shine a light on many of the destructive attributes we see emerging today and the growing uncertainty fueled by economic deterioration.

It doesn’t really provide any sort of overt commentary or judgements on those things, but it does a tasteful job of depicting an eerily believable future stage of them. The one character that sort of defies the doom and gloom is Camus, Rania’s dog. He rounds out the cast of characters nicely and provides some much needed levity in the game. Despite being written and performed, distracting similarly to Doug from Up, I rather enjoyed him and how he actually gives Rania something to personally care about. Overall, the writing, the voice acting, and the context behind the game’s many seemingly mundane deliveries is what really drives the experience forward and keeps it interesting. Many times, Rania is faced with morally grey choices that you decide on by how and where you deliver a package. These moments are some of the best in the entire game. They force you to consider options, perhaps go back and forth a bit, and ultimately make a call. Before you know it, you’ll be hanging on every one of Rania’s lines and genuinely worrying about the ramifications of whatever choice you made. 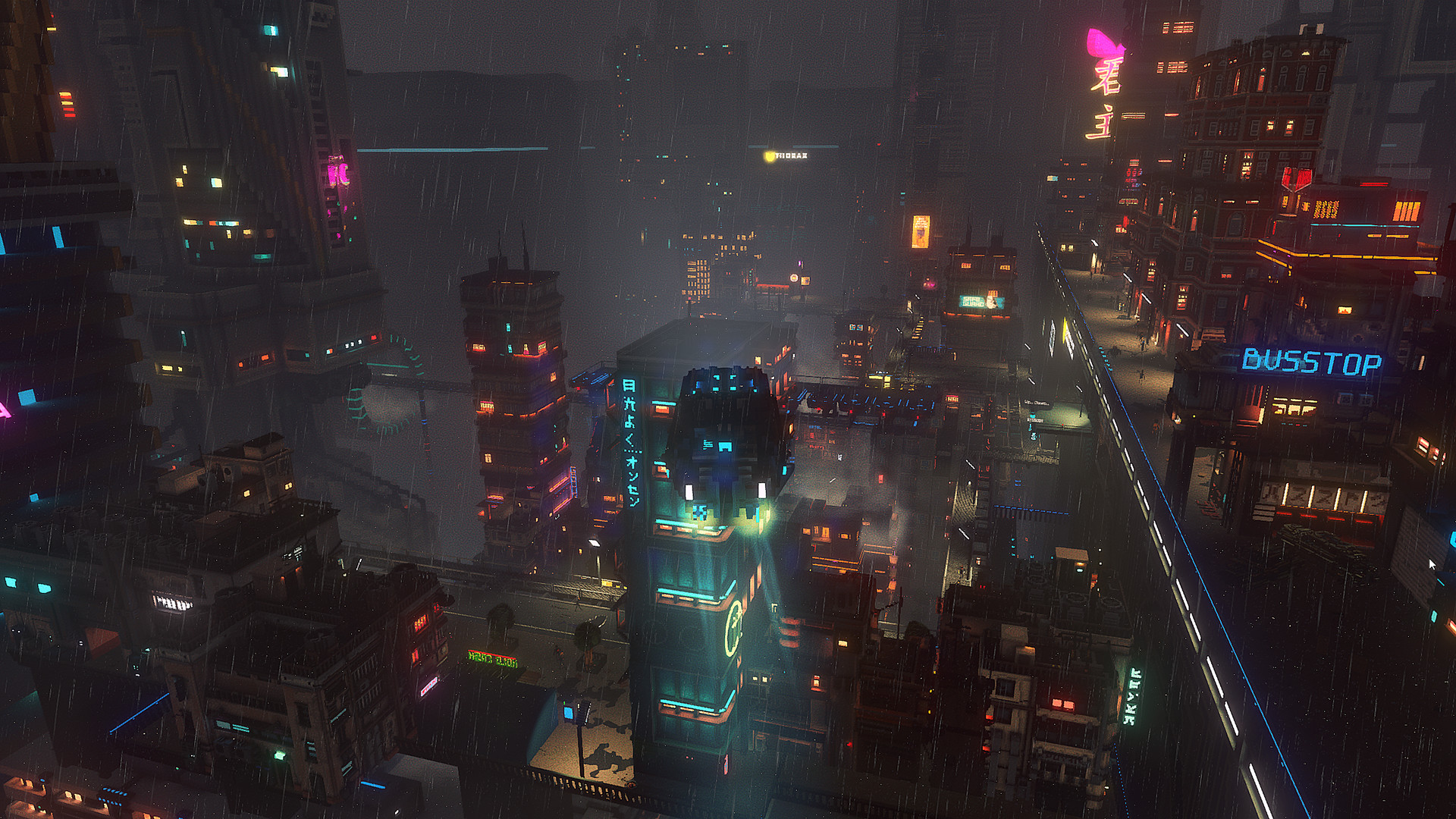 "Overall, the writing, the voice acting, and the context behind the game’s many seemingly mundane deliveries is what really drives the experience forward and keeps it interesting."

Meanwhile, the other side of the game is driving you HOVA around, which controls more or less like a floating tank, this isn’t helped at all by the bad framerate on the PS4, which I imagine isn’t any better on the Switch. Using the right stick to control elevation and the triggers to control going forward and backward is instantly easy to get used to, that said, the driving does suffer a bit from depth-of-field issues. I found myself hitting things that I had no idea I was close enough to come into contact with more often than I should have, and I think they could have been a little more generous with how close I needed to be to a parking space to land on it. That said, I never found it to be agonizingly bad, it just happens to be the weakest element of the game overall. Managing your damage and gas do help a bit with fleshing this part of the game out on paper, but I mostly felt like these things were just distracting me from Cloudpunk’s better half; the story.

To describe Cloudpunk as a delivery game with a good story, wouldn’t be entirely accurate. That’s more of a description of Death Stranding, whose gameplay is mostly focused on the adventure of the delivery itself. Cloudpunk doesn’t quite do that. It’s not really a delivery game with a story as much as it is a story-driven adventure game that just happens to use a delivery system as a device to propel its narrative. It’s not so much about figuring out “how” to make a delivery as it is about asking “why”. Cloudpunk’s world wants Rania to think it’s simple and straight up. But it’s characters and it’s story force you as a player to realize it’s anything but.

It pulls this dichotomy off with such elegance, that it’s ultimately a little disappointing to see that it doesn’t have much else up its sleeve. It goes out of its way to constantly remind you of the interesting world you’re in, yet ultimately, only uses what it has created to remind you that it exists. Some players may find that to be perfectly fine, and that to have some sort of singular moral grandstand on one perspective or another would ultimately subvert the games underlying theme of choice and consequence, and I don’t necessarily disagree with that. But at the same time, I would be lying if I said I felt totally satisfied after being shown such a well-crafted series of quandaries over and over without ever seeing it lead anywhere other than to more reminders of its own profundity. 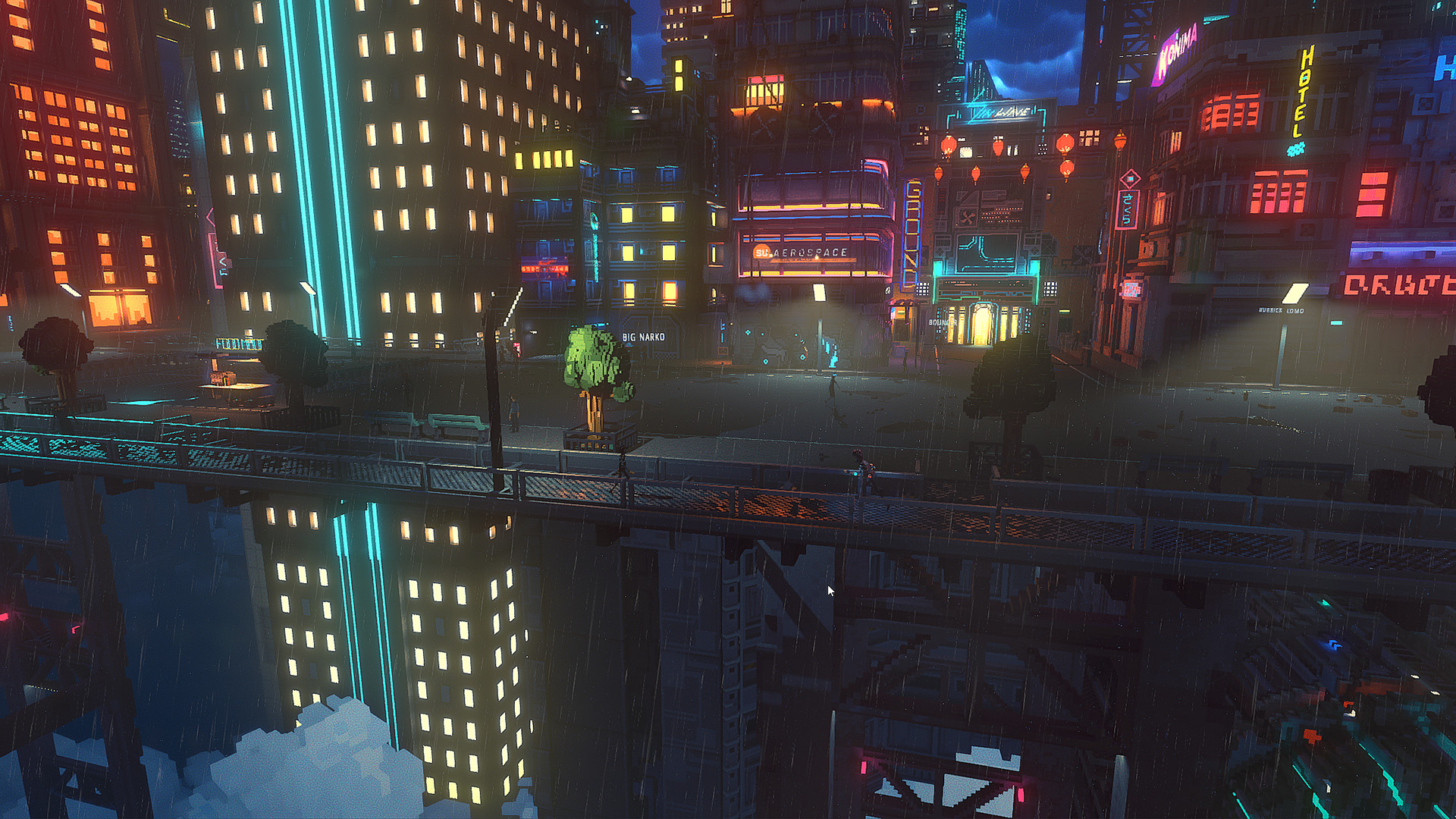 "Despite its flaws in the technical department, which are, at times fairly egregious, Cloudpunk does a pretty good job of making you forget about that with a surprisingly good story most of the time."

Despite its flaws in the technical department, which are, at times fairly egregious, Cloudpunk does a pretty good job of making you forget about that with a surprisingly good story most of the time. Once the story reaches the bottom of it’s bag of tricks however, you might start to notice its untapped potential becoming more noticeable as the game wears on. Depending on the player, the momentum created at the beginning might be enough to carry you through, but for most, I suspect, the ceiling created by its own unpolished gameplay and it’s inability to conclude in a satisfying way, will just barely keep it from achieving actual greatness.

Most great adventure games get away with shallow gameplay because of how satisfying their stories are. Cloudpunk gets closer to that than I thought it would, but still stops short of it. This particular adventure game does deliver the goods, just not quite enough of them, or in a consistent enough manner, for me to overlook it’s issues. In Cloudpunk, the good and the bad are simply a package deal.

Final Verdict:
GOOD
Cloudpunk reaches higher and achieves more than I thought it would, barely missing a spot among the giants of its genre.
A copy of this game was provided by Developer/Publisher/Distributor/PR Agency for review purposes. Click here to know more about our Reviews Policy.