Confirmed- God of War: Ascension has an online mode 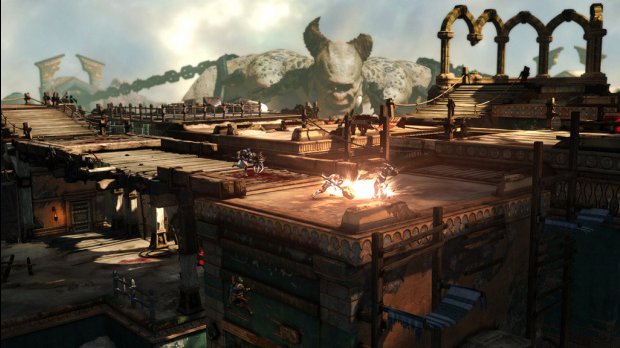 Ahead of the upcoming live stream, Sony has revealed that God of War: Ascension will have a multiplayer component, becoming the first game in the God of War series to do so, as was confirmed to  USA Today.

The multiplayer will have 8 players battling it out against each other, as the two teams battle each other while trying to bring down a big-ass boss. In the beginning, you create your own Spartan warrior with an option to worship one of the following gods: Zeus, Poseidon, Hades or Aries. Obviously, each god will grant you specific powers, weapons, armours etc. You will rank up and gain EXP points as the game progresses.

Each player gets the Blades of Chaos and an assortment of various hammers, spears, swords and more.

USA Today was shown the Domination mode, while two teams tried to be the first to bring down a huge cyclops boss to gain access to the Spear of Olympus, as the camera zoomed in to individual “visceral battles.”

“In one, two warriors who look like cousins of Kratos disembowel an enemy and his innards flow out. Later, one combatant cleaves an opponent in half from head to thorax,” describes USA Today.

“Eventually, the dominating team turns their attention to the Cyclops, attach some chains to restrain it and one leaps to put out its eye. ‘The whole idea behind it is that we want to bring the big moments to multiplayer,’ game director Todd Papy said after the demonstration.” Kratos is not playable in the online component.

My, oh my, this sounds so awesome and so in the spirit of God of War. Hopefully (and probably), Santa Monica can pull this off.

While no single player details were revealed as of yet, SOny promises a “a revamped combat system”.