The passage of time has done little to dull the brilliance of Naughty Dog's Crash trilogy.

Going into Crash Bandicoot N. Sane Trilogy, we were expecting it to be quite a typical remaster experience- one that invokes feelings of nostalgia and reminds players of how great a certain game was back in the day, but also serves to highlight the fact that these classics have not aged so well. But thanks in equal parts to Naughty Dog’s original timeless craftsmanship and some incredible reworking and fine-tuning by Vicarious Visions, N. Sane Trilogy makes sure that the Crash games, even twenty years since the franchise’s inception, are legitimately great and extremely enjoyable games, not just in context of how old they are, but even separate of that fact.

Activision and Vicarious Visions have both been calling the N. Sane Trilogy a remaster in the build up to its launch, but by doing so, we feel they’ve short-changed all the work that has gone in here. N. Sane Trilogy is much closer to being a remake- Vicarious Visions have kept every little detail of every single stage and level exactly as it was in the originals, right down to the inch. But while they haven’t made any radical changes or additions to the games, everything has been rebuilt and remade from the ground up, from the character models to the environments.

And that is perhaps the best thing that they could have done. The result of this is that Crash, Crash 2 and Warped are all essentially exactly the same games as they were before, but visually, they look stunning. This isn’t just the smoothening of jagged edges or the rounding of blocky pixels. No, the environments and character models are detailed and shiny and the animations are fluid and smooth. Crash’s orange fur looks magnificent, his eyes move realistically as he looks over his shoulders in horror at an oncoming rolling boulder, and the environments look gorgeous. Don’t get us wrong- N. Sane Trilogy is no technical marvel, but the visuals of all three games are brimming with charm, sheen and personality.

"N. Sane Trilogy is no technical marvel, but the visuals of all three games are brimming with charm, sheen and personality."

And it’s not just the visuals of the game that have received a complete overhaul- the audio department has received a significant upgrade too. All your favourite themes from the memorable soundtracks of Naughty Dog’s original trilogy have been changed to sound more detailed and better than ever before, while the sound effects have also been reworked. Enemies such as penguins and seals sound appropriately goofy, while the sound of Crash’s footsteps varies depending on what kind of surface he’s stepping on. All of these audio and visual upgrades go a long way in making sure that the Crash trilogy stands the test of time with great aplomb, while also retaining everything that made it so incredible back in the day right down to the t.

When it comes to the act of actually playing Crash, Crash 2 and Warped, the games are as much of a blast in today’s day and age as they were two decades ago. Naughty Dog’s Crash Bandicoot trilogy was known for being extremely punishing and, in turn, satisfyingly rewarding, and both those things hold true even today. Thanks to the fine-tuning and refining done by Vicarious Visions here, and thanks to the more fluid animations and significant improvements to balancing, the N. Sane Trilogy is always challenging, but never unfairly so. This helps suck players into the loop of “one more try”, and we were repeatedly giving levels and stages just “one more go” to get past a tight jump, or some smartly placed enemies.

Looking at the three games individually, there’s no doubting that, all things considered, Crash Bandicoot 2: Cortex Strikes Back is perhaps the best of the three. The original Crash Bandicoot works as well as it does because of its simplicity- most of the times it is straightforward, and the game throws simplistic objectives your way. And while it is possible for that very aspect of the game to work against it, combined with the excellent rebuilding work done by Vicarious Visions, it is that very simplicity that helps Crash Bandicoot feel and play so well even two decades on from its original release.

Crash Bandicoot 2 builds on that simple yet solid foundation of its predecessor in the best ways possible. When Cortex Strikes Back first rolled out in 1997, Naughty Dog had really come into their own, and they had a firm grasp on what did and didn’t work well in the original game. And that really shows. Crash 2 has that same simplicity, but it takes what made its predecessor work so well and plays with it in great ways. 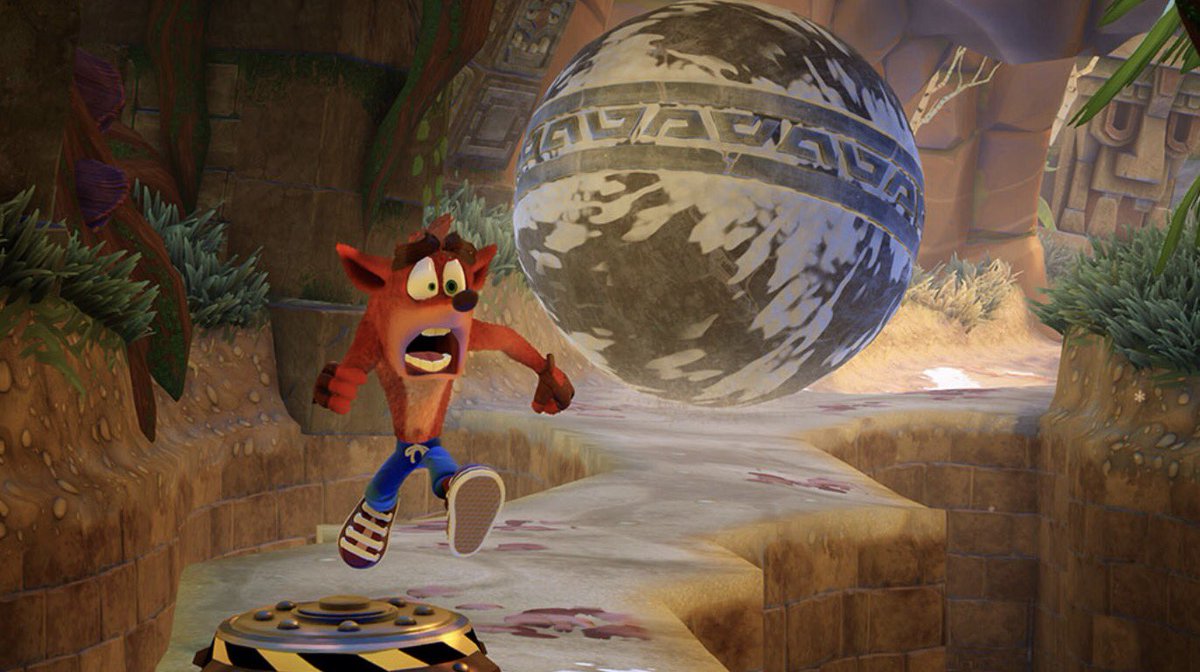 "When it comes to the act of actually playing Crash, Crash 2 and Warped, the games are as much of a blast in today’s day and age as they were two decades ago."

Level design is more complex and imaginative, with more varied enemy designs, the addition of hidden paths, and other neat little environmental variations. Each level has its own distinct feel, making sure that monotony or boredom never set in, and that players are always on their toes and looking forward to what comes next. One level will see Crash slipping around on ice, while another will see him stomping through a jungle. Meanwhile, simple new additions – such as the ability for Crash to be able to crouch – add more to the moment-to-moment gameplay than you’d think.

That perfect balance between complexity and simplicity found in Crash Bandicoot 2 is, sadly enough, lost in Crash Bandicoot: Warped. Don’t get us wrong, Warped was an excellent game back in the day, and it’s still an enjoyable ride in the N. Sane Trilogy. But Naughty Dog’s third Crash game is perhaps the best illustration to show that sometimes, more is not always better. Warped adds a great deal to the gameplay of Crash 2, and some of those things don’t work as well as others, making it a far less consistent experience than its precursors. Not all the new additions are always in sync with each other, and it sometimes feels like the game is trying maybe a little too much, and losing sight of what made its predecessors as good as they were.

The flying or underwater levels, for instance, are the perfect examples of Warped trying new and unique things but being unable to pull them off. Flying levels are, for the most part, rather dull, and the underwater stages just don’t work, owing to the fact that Crash’s movement in those feels lose and unresponsive. Similarly, stages that see you riding animals are hit and miss- some of them stand out, while others feel like chores. This mostly boils down to inconsistent level design. That said, additions such as the double jump and longer spins do add a lot to the moment-to-moment gameplay, and thanks to these, when the level design in Warped is on point, controlling Crash feels significantly better than in Crash Bandicoot and Crash 2.

One of the additions that was very well received in Warped back when it first launched in 1998 was the level timers, and Vicarious Visions have made the excellent decision of adding this feature to Crash Bandicoot and Cortex Strikes Back as well. The fact that N. Sane Trilogy includes three games for the price of one makes sure that it is worth your money- the added replayability thanks to the time trials is icing on the cake. The ability to play as Crash’s sister Coco is also appreciated- there is very little difference in playing as Crash or playing as Coco other than in how the two move and are animated, but veterans of the series will surely be glad for this addition. 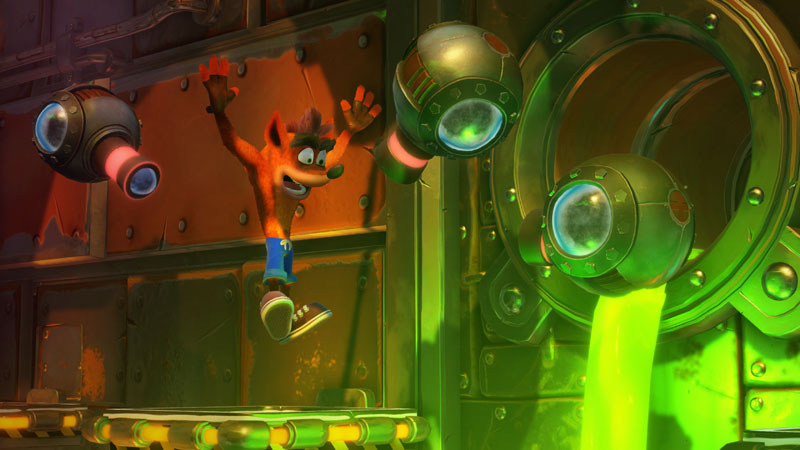 "The fact that N.Sane Trilogy includes three games for the price of one makes sure that it is worth your money- the added replayability thanks to the time trials is icing on the cake."

Considering the fact that the first three Crash Bandicoot games are two decades old and belong to an era where 3D gaming hadn’t even been properly pioneered, much less perfected, it is surprising just how well they play and feel even today. Credit needs to be given to both, Naughty Dog and Vicarious Visions in equal measure for this- the former built mechanically sound games built on solid foundations, while the latter implemented major improvements and upgrades to make sure they don’t feel outdated or aged even twenty years on from their release. Crash Bandicoot N. Sane Trilogy brings three classics into one neat package and goes out of its way to make sure that all three of them stand the test of time with surprising grace. For fans of the series, this feels like coming back home after a long vacation. For newcomers, it’s the perfect time to jump in. Let’s hope this isn’t the last we see of our favourite Bandicoot.

The original Crash Bandicoot can sometimes feel a little too simplistic; Level design in Warped is inconsistent; Some features in Warped don't work very well.