Create is a single-player sandbox game with a heaped spoonful of platforming and puzzle elements. It was developed by EA Bright Light Studios and published by EA (no surprises there). It was released on the 16th of November 2010 and is available on PlayStation 3, Xbox 360 and PC. The game is notable for supporting a variety of control layouts, including Sony’s motion-sensitive Playstation Move technology, as well as conventional controller/keyboard/mouse inputs. 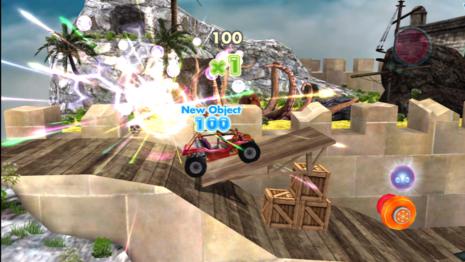 Dune Buggies are a staple component of many solutions in Create.

The game starts with a lengthy loading screen which eventually leads to a tutorial. I found it to be unclear and muddled, and it didn’t do a good job of explaining the controls. Fortunately, after passing the tutorial by trial and error you can access the game’s Help Center at the push of a button. This screen allows you to review the control layout (not re-mappable) or receive a vague hint as to how to proceed. When I say vague, these hints would give Confucious a run for his money.

The game world consists of an interactive main hub, ofwhich the tutorial is the first level, hence the enormous first load. This hub is split into ten themed stages, such as Theme Park and Transportopia, and a bonus stage. In each stage there are ten challenges to conquer. Each challenge falls into a category depending on its objective. Each category involves the player using specific objects in several different modes to: reach a goal/target (Pickup Party), rack up a massive score by using several items at once (Scoretacular) or even building their own machine out of blocks, girders, wheels and hinges (Contraption-o-Matic). 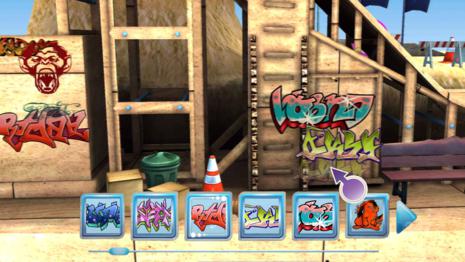 Upon completing a challenge, the player will unlock ‘Creative Sparks’. Each Spark will reward the player with an item to use in challenges or to their own devices, props to place in their scenery, terrain paint schemes and even “sky stickers” (also known as clouds, to you and I). Challenges generally have three levels of completion, the usual Bronze, Silver or Gold, with increasingly difficult parameters to attain them. Achieving gold also unlocks silver and bronze, so no grinding is needed.

To access items, the player must open the main interface which comprises the four categories of tools (Game Objects,  Brush Tools, Environment and World Tools) as well as options to Reset or Save your creation. As benefits consoles, this interface is a wheel-type, with specific tools organised under and accessed via their category. During challenges the permitted items are accessed in a different selection menu which only needs one button-press to access. 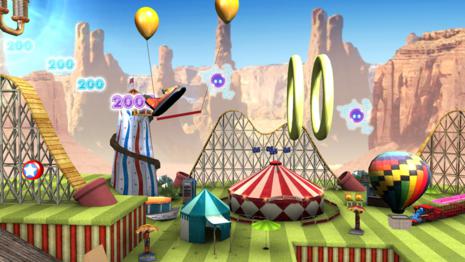 Once you master the slippery controls, YOU TOO can produce something like this. Maybe.

Due to the pants tutorial I found myself referring to the Help Center frequently, and until I got to grips with them the controls felt unwieldy and unnatural. My biggest gripe is that, rather than have A (x for you Sony fans) as the selection button, B (o for PlayStation) has been set. This, for me, was almost game-breaking as I was often inadvertently cancelling item placement/adjustment. The fact that you cannot remap the controls is probably a good thing, given the open-ended gameplay, but this took me some time to get used to.

The challenges start off easy and slowly ramp up to fiendishly dfficult. Lateral thinking skills are a must as solutions are often convoluted and not always obvious. Challenges are unlocked in order by completeing earlier ones, but once unlocked can be completed in any order. If one particular sequence is giving you trouble, skip it and come back later. Experimenting with different combinations of available items is a must, and often produces humourous results. Seeing a torrent of dodgems pour off a cliff is just one of the moments which sticks in my mind. 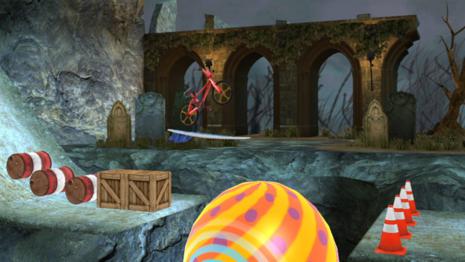 Spielberg might have pioneered the flying BMX, but EA has the SURFING flying BMX.

The game doesnt push the graphics envelope in any dimension, but Create’s clean and uncluttered visual design really helps when you have many interacting items on-screen at once. The audio seems charming at first but over time can grate on the ears. The theme for the Fairground stage should come with a Public Health warning. The lack of any voice-acting means that the player is subjected to endless loops of tinny music whilst working through each challenge.

Create will appeal to a niche audience. If you don’t like physics puzzles, this game is not for you. Similarly, if you’re looking for a LittleBigPlanet replacement the lack of protagonist (no charming Sackboy shenanigans here) and narrator (no honeyed tones of Stephen Fry, only annoying music) may be a turn-off. Ultimately, the game is a good package but deserves its 7+ rating from PEGI. Definitely one to purchase to keep your kid brother or sister quiet whilst the grown-ups have ‘Tall-Time’.

Final Verdict:
FAIR
If you ever wanted to play one of those physics puzzle browser games with better graphics, sound and controls, then look no further.
A copy of this game was provided by Developer/Publisher/Distributor/PR Agency for review purposes. Click here to know more about our Reviews Policy.