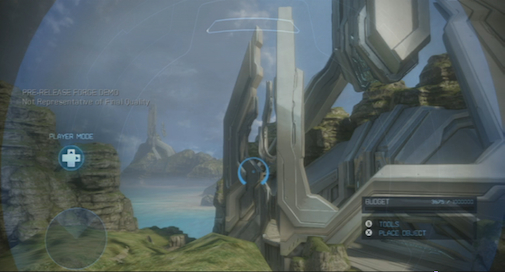 As if enough news hasn’t been pouring in from expos these days, 343 Industries recently showcased the new Forge Mode from Halo 4 at Rooster Teeth Expo.

Having been a staunch supporter of Halo, Rooster Teeth’s premier Red vs. Blue series put it on the map as far as Halo machinima goes. Some of the new features include:

– Simplified user interface
– Ability to permanently lock objects on a map, which means they won’t be affected by the physics engine
– Duplication of items to be simpler
– New lighting system
– Changing map values for players in specific areas, like jump height or damage (previously seen in Reach)
– “Magnet” feature will be introduced to replace “undo”, though how this helps in correcting mistakes is unknown

Other interesting features included the new H.O.R.S.E. map and a first person view from inside a Banshee tank.

Halo 4 will be published by Microsoft Game Studios exclusively for the XBox 360 on November 6th 2012.