Crysis is a first-person shooter series created by Crytek. The series initially originated on the PC and has been made multiplatform with the release of Crysis 2.

The series’ main USP is gorgeous graphics and the Nano Suit that offers a lot of powers to the main protagonist. The first game is still being regarded as a benchmark for PCs worldwide.

The games have been published by EA, who will also be publishing the third game in the series. Crysis 3 was accidently revealed by EA via their Origin store and had to official reveal it later. [reference]

The game is set in a post-apocalyptic New York where the player has to reclaim the city from the Cell operatives and aliens.

It will run on Crytek’s CryEngine 3. The game was released in February 2013 for the PS3, Xbox 360 and PC. There is no Wii U version of the game.

The game has been in development ever since Crysis 2 came out and promises to be bigger and better than its predecessor. The game will be a showcase to CryEngine 3 as Crytek has pinned its hopes on this game for getting people to license this game.

Crytek’s Cevat Yerli has said that the game is a spiritual successor to Crysis 1 and will feature some expansive environments. [reference]

According to the developers, they want to ensure a standard experience on all platforms and even said that PC gamers are known to whine and want the game only on PC.

“PC players, fundamentally only want Crysis to be on PC, right? And, you know, that’s kind of understandable when you consider how the original game – and even Crytek itself – started out,” Crytek’s Rasmus Højengaard said.

“But, we’re definitely pushing this game a lot from a visual standpoint, and for sure there’s going to be visual goodies in it that you can only get if you have a super-high-end PC. What’s going on?

“At the same time, we want to ensure if you don’t have a super-high-end PC, the game will still look amazing. On top of that, we want to make sure the experience is not different from platform to platform,” he added. [reference] 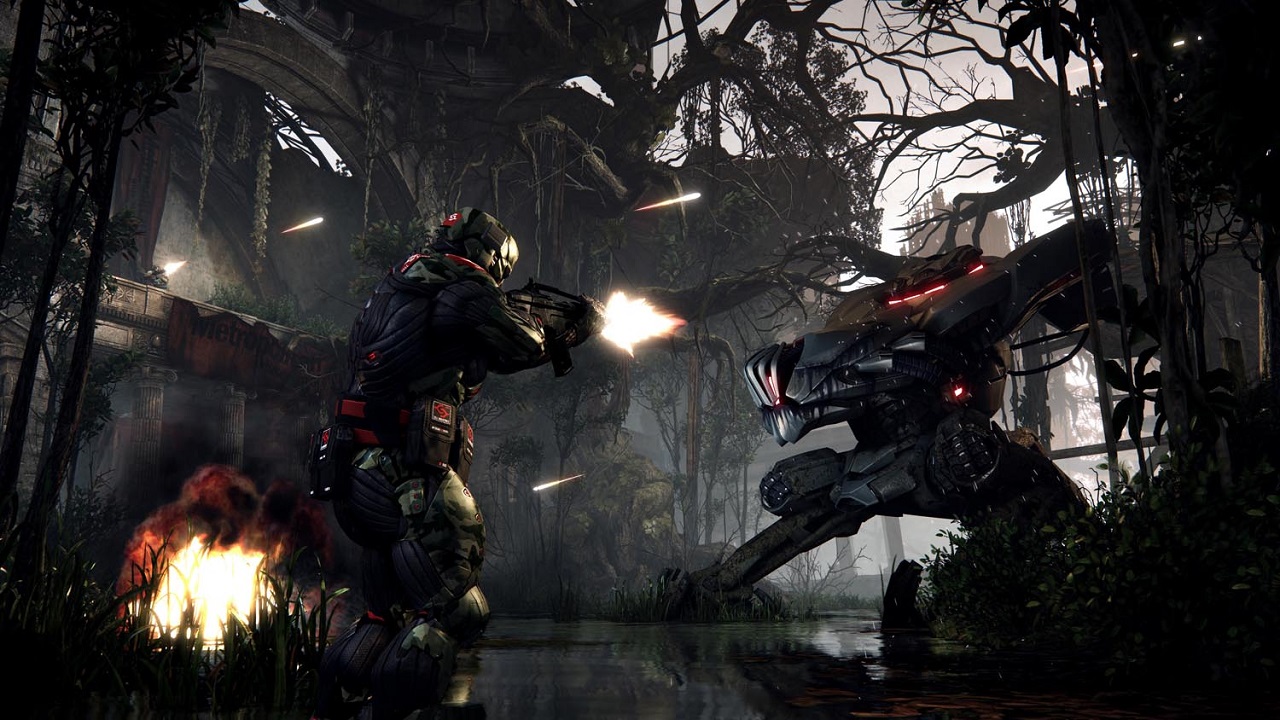 The game will be utilizing DirectX 11, which they added to Crysis 2 after release via a patch. Crysis 3 will launch along with it this time. Yerli stated that he wanted PC gamers to approach the sequel in the same way they approached the first Crysis. Which only makes sense, since the first Crysis pulled a similar stunt by only being playable on DirectX 10.

That API was only available on Windows Vista, so if you wanted to play the then revolutionary graphical masterpiece, you needed to upgrade to Vista. [reference]

“I honestly think that Unreal Engine 4 would not be able to do Crysis 3 on consoles right now. The PC version could do it, maybe, but it would call for a higher PC spec. CryEngine 3 is capable of doing anything Unreal Engine 4 can. We don’t need to tick up the number to CryEngine 4,” he said. [reference]

The PC Version is supposed to feature full graphical options. They have also started releasing the 7 Wonders of Crysis 3 videos to showcase what the game can do right now.

Crysis 3 will see a return to New York which has been covered in a Nanodome by the Cell Corporation. The game is set in the year 2047 and storyis about a revenge mission, “”The citizens were told that the giant citywide structures were resurrected to protect the population and to cleanse these metropolises of the remnants of Ceph forces.”

“This dangerous new world demands advanced weapons and tactics. The player will utilize a lethal composite bow, an enhanced Nanosuit and devastating alien tech to become the deadliest hunter on the planet,” according to EA.

Crysis 3 is a first-person shooter created by Crytek and the main USP of the game is that you get to use the Nanosuit which features a lot of abilities like enhanced strength, speed and so on. The main protagonist will be able to kick vehicles and also use the Nanosuit to cloak himself to perform a variety of gameplay moves.

One of the major improvements in the game is that you can use the suit’s unlimited sprint ability without using up the available energy. This will make people more immersed in the gameplay.

“In Crysis 3 we said, because now we can destroy them [buildings] in a way and a reason for the buildings to collapse and be destroyed and what not, we can make it open but also vertically open. So I think people are going to get a Crysis-esque sandbox, but still a different layer on top of it,” said Cevat Yerli.

The game will feature a lot of options to use the enivornment to take care of enemies and the new Compound Bow will play a vital role. This use of the environment coupled with the bow sees a return to the original Crysis feeling where players could stalk enemies and use stealth and power to their advantage. This return to form was well received by fans of the series and critics alike. 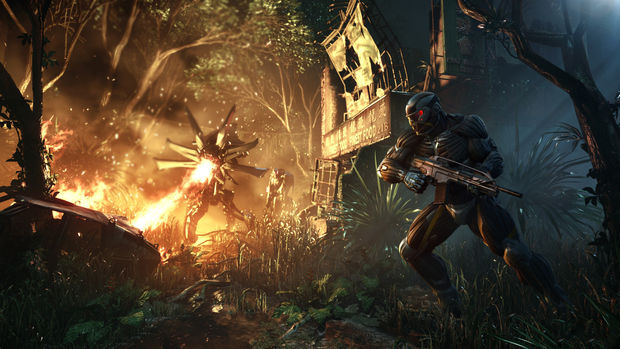 Ceph: Ceph are alien species determined to wipe out the human race and their full name is Cephalopods. They are said to be originated in the Triangulum or M33 Galaxy, located in the constellation Triangulum, 4 million light years from Earth. They had been on Earth for at least 2 million years in a dormant state until Jacob Hargreave in 1919 set in motion events in Tunguska that led to the Korean People’s Army awakening one of their installations.

C.E.L.L:  They were first spotted in Crysis 2 and then started fighting the Ceph–an alien species determined to annihilate the human race and take control of the planet. The organization’s leader died in Crysis 2 and he was known as Dominic Lockhart.

Crynet Enforcement & Local Logistics is run by the CryNet corporation and was under contract from the US Department of Defense and deployed to New York City to police the evacuation in place of the military, who were currently fighting the Ceph invasion. C.E.L.L. is considered a brutal and corrupt organization, where its soldiers are increasingly trigger-happy and unprofessional as the story unfolds. 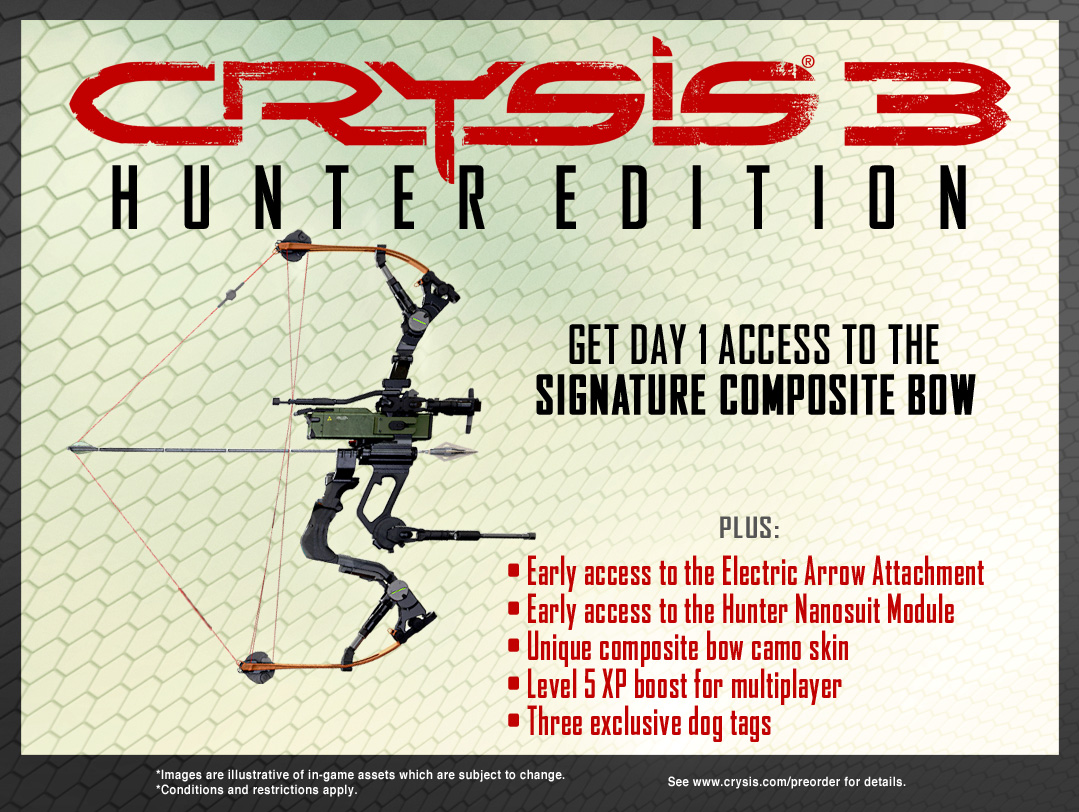 Crytek announced Crysis 3 Hunter Edition when they officially revealed the game. This will give players early access to the new signature bow and its attachments, plus the Hunter Nanosuit module which adds  additional power and functionality to the super-suit.

Gamers who pre-order now will also have a head start when playing online with a bonus XP boost up to level 5, a unique bow skin and three exclusive dog tags.

Also retailers are offering these goodies:

Stalker Pack – Includes the base game, all Hunter Edition content and the following early multiplayer unlocks: for players who like to stalk their prey from the shadows the Stalker Pack provides early multiplayer access to the deadly semi-auto Jackal shotgun. This powerful, close-range shotgun comes with a unique silencer attachment, custom weapon skin and two exclusive themed in-game dog tags. 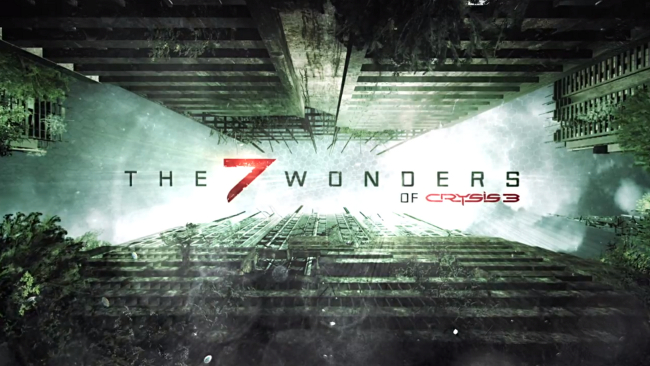 The 7 Wonders of Crysis 3 is a new marketing tool by EA and Crytek which showcases what the game is capable of. It will introduce the incredible environments found within the Liberty Dome while also showcasing all new weapons and enemies, and the franchise’s trademark sandbox shooter gameplay.

Releasing 22nd February 2013 in South Africa, Crysis 3 is slated to be one of the first blockbuster games of 2013 and the pinnacle of the series thus far.

Crysis 3 introduces a new weapon to the game called the Compound Bow. It is the ultimate weapon for tactical combat. You’ll be able to quickly evolve to the needs of the battlefield by choosing your arrow type, draw strength, and victims. 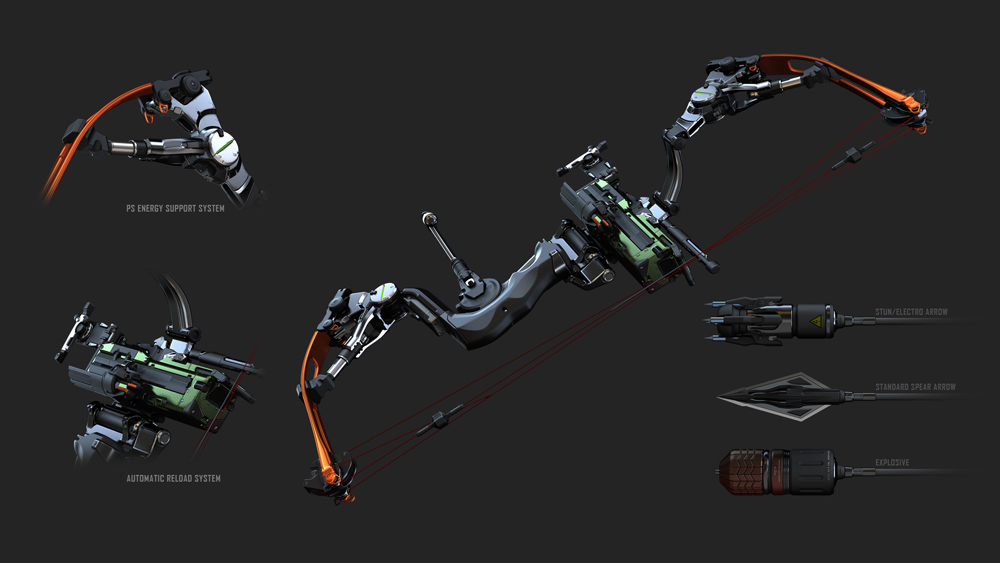 Utilize the futuristic Compound Bow in conjunction with the stealth capabilities of the Nanosuit. Firing the bow doesn’t break your invisibility, but it will destroy whatever it’s pointed at. Arrows might be an extension of the soul, but the Compound Bow is a weaponized extension of the Nanosuit. Use your cybernetic strength to turn enemy personnel into pincushions in uniform.

Alpha Jackal – An upgraded version of the shotgun, Jackal, from Crysis 2.

Bow and Arrow – The Bow was introduced with the announcement of Crysis 3 to emphasize your “The Hunter”. The bow and arrow will have multiply arrow upgrades which includes shock, incendiary, explosive and a special arrow just for stealth.

C4 – High Explosive featured in the at the end of the Crysis 3 E3 2012 Gamepaly Trailer.

Hammer 2 – Upgraded version of the hammer pistol, Hammer, from Crysis 2.

Jaw – A rocket launcher that has been in every single Crysis Game to Date.

Scar – A combat assault rifle that can be equipped with various attachments.
(The Scar has been used in every single Crysis Game to date.)

Typhoon – A new assault rifle that can go fully automatic which was showed off in the Crysis 3 E3 2012 Gameplay Trailer. [reference]