Get the complete breakdown of the trailer here.

Posted By Shubhankar Parijat | On 11th, Jan. 2013 Under Article, Feature

CD Projekt RED recently released the teaser trailer for their upcoming title, Cryberpunk 2077, one of the two AAA titles they’re currently working on (here’s some interesting news on the second one), and it’s looking really, really good. The trailer doesn’t show anything that specific, but what we have seen shows signs of brilliance. There were plenty of details hidden in the trailer though, plenty of those in plain view.

We went though the trailer again, going through some sections frame by frame, and found some pretty interesting stuff. Some of it gives a clearer picture of what exactly is going in the video, while other stuff reveals some potential information on the game.

But before we start breaking it down, watch the trailer below if you haven’t already seen it.

Done? Saw the entire thing? Good. Now let’s get down to the analysis:

We can see in this image that the bullet that was fired at this woman did not affect her, rather shattered into pieces. Not just that, she did not even react or flinch. This may lead to the assumption that she is a robot, but that would be wrong. CDPR says that in the world of Cyberpunk 2077, people often get heavily augmented, mostly for aesthetic purposes, but the more augmentations they get, the more they start losing their sanity, due to the conflict of organic and inorganic material in their bodies. This woman is presumably very augmented, thus her resistance to the bullets, and has probably had a psychotic breakdown, which is why she is not reacting to the bullet hitting her. It does leave a scratch though, but there’s no blood.

We can see the level of detail on the weapon here. This is a pre-rendered video, but CDPR says it wants to achieve this level of detail for their weapons, and also that they want the final game to look as good as the footage in the video. This could prove to be a huge task.

Once again, we can see the high level of detail on the weapons, with the shell popping out of the barrel in this automatic assault rifle.

The woman must be a major target and really tough to take down for such a large and fully equipped police force having to step up. This also leads to the assumption that this is probably a major story event in the game. Maybe it occurs before the events of the game, and triggers the entire story. It certainly seems momentous enough.

Here we can see the structure of the city. It’s a congested city with plenty of high rise buildings, as is obviously expected in a cyberpunk setting. Their seems to be normal, current day architecture in the bottom of the buildings with modern additions to it in places, showing the gradual progression of the city. This makes for a believable setting.

The woman has scythe-like blades extended out of her arms, probably another one of her augmentations. We can see robotic lines across her body too, and there’s blood on her dress, which is assumedly that of one of her victims. Speaking of which, we can see dead bodies in the background, which leads us to believe that she is the one that has caused this massacre. Since she is such a heavily augmented person, she has probably lost all her sanity, which caused her to do something like this.

Here, we get to see a police car. It’s a normal cyberpunk setting themed car, adding to the futuristic feel of the game. The mixed architecture of the city can also be seen in the background, once again.

In this frame, we get to see the full extent of the massacre the augmented woman has caused. There’s plenty of dead bodies (the news cast in the video says it’s 14 dead bodies and other injured people) and blood.

The man holding her on gunpoint seems to be a special forces man, judging by his equipment and the way he is dressed. He might be a major character in the game, since he is shown again in the trailer.

One again, you can see the great attention paid to the details of this gun.

This man seems to be heavily augmented too, but is somehow keeping his sanity in check. Probably the people over at the special forces where he works have some counter augmentations to keep their employees’ minds intact.

We get a much better look of the cityscape. The cyberpunk imagery evoked in this particular frame is very, very reminiscent of Blade Runner.

This is the same woman, as we can tell from her scratch, meaning that this event is obviously taking place after the incident shown in the video. She is bald now too. The man who was holding her on gunpoint obviously did not kill her, even though we saw his starting to pull the trigger, since we know she is with him (we see him in the next frame). Her eyes seem to be a different colour too. She might be working with the special forces or the police on some case she was involved in.

We can see that this is the same man that was holding her on gunpoint, since he is wearing the same uniform, has the same visor on and has the same patch on his left shoulder.

The woman puts on the visor too, reaffirming the assumption that she might be working with the man now. Which means she might also have the aforementioned (hypothetical) counter augmentations to keep her sane now. 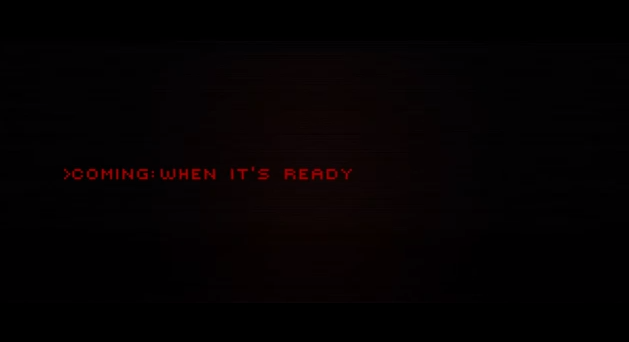 CD Projekt RED says that they will release the game when it’s ready. We have a tentative release date of 2015 right now, which means it will probably be on the next generation platforms. Which also means that CD Projekt RED might successfully achieve their goal of making this game look as good as the footage in the video, as was mentioned above.

Did we miss anything? Have anything to add? Sound off in the comments section below, and stay tuned to GamingBolt for more on Cyberpunk 2077!