Cyberpunk 2077 Lore – What is the Arasaka Corporation?

Brush up on your Cyberpunk lore before CDPR's RPG launches.

The world of Cyberpunk – from the tabletop RPG, to its multiple editions, to the upcoming CD Projekt RED game – is one that is, like many cyberpunk settings, dominated by corporations and commercial giants. Through ever-growing profits, in Cyberpunk, companies have grown to massive proportions and exert influence and control over all walks of like all over the world. Night City, as the cultural and commercial hub of this world, is perfectly emblematic of that corporate power.

And perhaps one of the biggest – if not the biggest – corporations of them all is the Arasaka Corporation. What started as a small family business in Japan has, over the course of over 160 years, grown into one of the largest megacorporations in the world, with influence in the economic, military, cultural, political, and many other spheres. Night City is, for all intents and purposes, owned and run by Arasaka, whose headquarters in the city, the Arasaka Tower, sits proudly in the Corpo Plaza and towers over the entire city.

But what exactly is the Arasaka Corporation? How did they get to be in this position of power? What role are they going to play in Cyberpunk 2077’s story? Before we get into all that, it’s important to look back and see the events that have transpired over decades to lead to where we find the megacorp when Cyberpunk 2077 kicks off.

Founded in Tokyo, Japan by Sasai Arasaka in the year 1915, Arasaka Corporation started out as a weapons manufacturing company. In the years leading up to World War II, Arasaka’s business grew rapidly, and so, too, did its reputation, By the time the war started, Arasaka had become the primary manufacturer and supplied of weapons Japan’s imperial army. Sasai Arasaka, however, was also one of those who saw Japan’s defeat in the war coming, and as such, came up with measures to save his wealth and flourish even in the post-war period.

By 1960, Sasai Arasaka was dead, and his son, Saburo Arasaka had taken over as CEO- and his vision for the company and what place it had in the world, it turned out, was much grander than that of his father. Saburo Arasaka realized that after the Second World War, Japan would grow on the world stage not with politics or military might, but through commerce, and he saw the Arasaka Corporation as the one that would spearhead that growth. Through commercial success and economic might, Saburo Arasaka wanted to exert influence over the political and military circles of the world in his own way.

Every decision he made for the company was driven by that goal. At the time, Arasaka’s manufacturing and banking divisions were its biggest business, the former especially. Arasaka-manufactured vehicles and weapons were globally successful, and highly sought after by military and police forces around the world. Saburo Arasaka set up a third division- Arasaka Security, specializing in personnel, computers, and electronic secutiry. The Arasaka Security grew quickly, and soon, the corporation had thousands of highly trained agents, essentially an army of its own, and was often contracted for security services across the world. 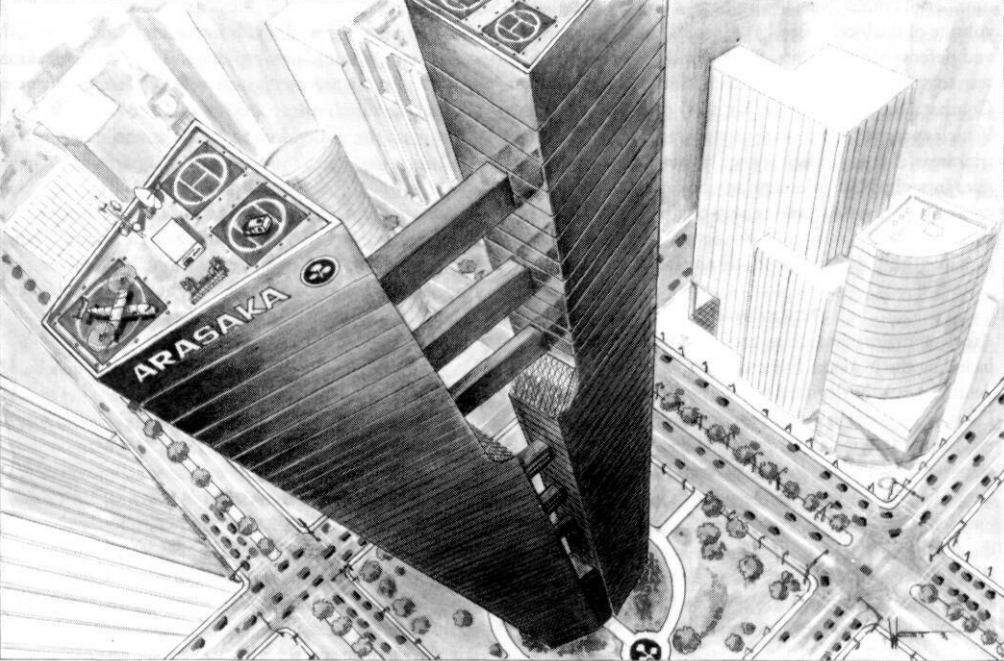 In the late 1990s, Arasaka Corporation had moved into the paramilitary contracting business as well, and began training the world’s first corporate armies. Over the coming years, Arasaka aggressively either sabotaged or absorbed all of its corporation, while also regularly buying out companies that they thought would prove to be assets to them in the future. Arasaka Corporation also had extreme influence in Japanese political circles, with 60% of the National Diet being occupied by politicians who had been bought by the megacorp.

By the year 2020, Arasaka was essentially on top of the world. Its banking, manufacturing, and security divisions had continued to expand while the company diversified in other areas, and its valuation had increased to 475 billion Eurodollars (which, by that time, had become the primary currency in the world of Cyberpunk). Saburo Arasaka, now aged 101, had replaced several parts of his body with cybernetics, but was still aged and growing weaker, and had, as such, relinquished much of the control to his son, Kei Arasaka.

Of course, it’s not surprising given the corporation’s meteoric growth that it had a reputation for being ruthless and, quite often, straight up taking actions beyond the limits of law. Covert options, sabotage, abductions, assassinations, bribery, espionage, extortions, blackmail- these are just a few of the things Arasaka routinely indulged in to further its interests, and would continue to indulge in.

Things were clearly going well for the company- but then came the Fourth Corporate War, a global conflict that went on from 2021 to 2023 between two aquacorps known as CINO and OTEC. During their conflicts, CINO hired Arasaka’s paramilitary to fight for them, while OTEC hired Militech, who, along with Arasaka, were one of the biggest paramilitary corporations in the world. The war, however, did not go well for Arasaka Corporation. By the time it had came to an end, Kei Arasaka had died, Arasaka Tower in Night City had been destroyed in an attack by Militech, and the United States publicly blaming Arasaka themselves for the attack.

Meanwhile, the company’s charters to operate in the United States was revoked, and Arasaka was reduced to a Japan-only corporation, which wouldn’t change for at least a decade. Arasaka’s assets in the United States were either seized or driven off-shore, while its board members were declared terrorists. Japan itself also had to publicly condemn Arasaka. All in all, by the time the Fourth Corporate War came to an end, Arasaka Corporation was in the worst shape of its life.

Though they operated purely as a Japanese company for the next decade and had to spend a lot of time doing damage control and then recovering from their devastating defeat in the war, they did eventually recover. By 2077, Arasaka, now seemingly run by Yorinobu Arasaka, is one of the biggest and more powerful megacorporations in the world once again, and has even managed to return to the United States. The megacorp now operates in Night City as well, with a tower in the city’s centre, and is essentially the ultimate power in Night City.

And that’s the state they’re going to be in when Cyberpunk 2077’s story kicks off. The company is now apparently one of many groups and factions looking for what essentially supposed to be a digital immortality chip, and Johnny Silverhand, who has held a grudge against the megacorp for a long time, is seemingly in the thick of things as well. Clearly, Arasaka is going to have an important role to play in Cyberpunk 2077, and will shape much of the game’s story in significant ways. It remains to be seen just how that will happen- thankfully, we don’t have to wait too long to find out.