Cyberpunk 2077 To Be Distributed By Warner Bros. In North America; Might Be Launching In 2019

While CDPR confirms the continuation of its partnership with WB Interactive Entertainment, a separate report indicates a 2019 launch.

CD Projekt RED have announced via a press release that Warner Bros. Interactive Entertainment will be publishing the upcoming Cyberpunk 2077 in North America. The two companies have shared a partnership for some time now, with the distribution of both, The Witcher 2 and The Witcher 3 having been handled by WBIE in several regions.

“We’ve worked with Warner Bros. Interactive Entertainment on The Witcher 2: Assassins of Kings and The Witcher 3: Wild Hunt, and both releases turned out to be really successful, so we’re entering this new stage of our cooperation with great confidence,” said Michal Nowakowski, CDPR’s SVP of business development. “Cyberpunk 2077 is our biggest and most ambitious project to date, and I’m really looking forward to all the amazing things we can achieve together.”

In related news, it also seems like Cyberpunk 2077 might be launching sooner than expected- as early as 2019, in fact. Turkish publisher Bilkom, who handled the distribution of The Witcher 3 in Turkey, recently put up a tweet that seemed to indicate that the RPG will launch in 2019.

Of course, the tweet was taken down not long after that, but as you may have expected, there’s a screencap of it (via VG247 Turkey) for you to look at- you can view it below. Recently, CD Projekt RED stated that releasing the game on current-gen systems is what they’re aiming for, so a 2019 release does make some amount of sense- even so, take this with a pinch of salt.

Beyond Cyberpunk 2077, it seems like CD Projekt RED are going to have their hands full with other complications. The validity of their Witcher license has been called into question by Andrzej Sapkowski, the author of the novels the games are based on, who is also demanding additional royalties from the studio. Read more on that through here. 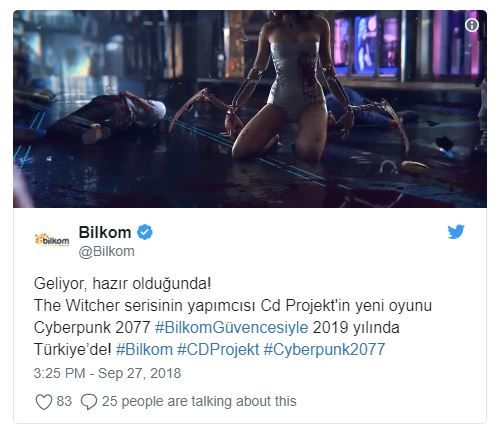