Posted By George Reith | On 10th, Aug. 2012 Under Reviews | Follow This Author @GNReith

With the Just Dance and Dance Central series tearing up the Wii and Xbox 360 respectively, Sony was bound to follow suit for the Playstation Move sooner or later. Dancestar Party marks the attempt by Sony London to get involved in the motion controlled dancing craze but, whilst Dancestar Party offers a feature rich package, the song list is a significant let down in comparison to other competing dance games. 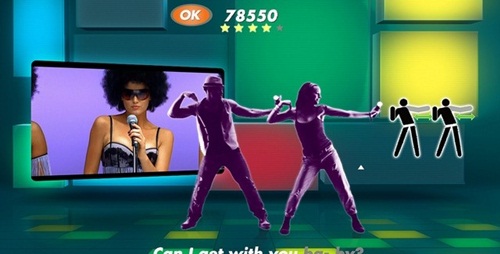 Alternate duet routines are just one of many ways to shake your stuff.

If you’ve ever played a motion controlled dance title, you’ll know exactly what to expect in Dancestar Party. You hold the Move wand in your right hand and mimic an on-screen figure’s dance moves. Accuracy and good timing nets you points, which in turn tally up to a star rating at the end of the song. The mechanics offer nothing new, but are robust and enjoyable enough with the Move offering a precise method of motion controlled input. My attempts to just fling my arms randomly for points were generally ignored, meaning it must have known I was going wrong at some point, an accolade I’m somewhat reticent to award to other titles in the genre.

The main string to Dance Central’s bow is its large amount of features and modes. There are a fair few songs to contend with, with each offering three difficulty levels and a choice of a full length or shortened routine. The tertiary difficulty system offers more than just point modifiers, with each routine differing greatly in terms of technical complexity and energy. It’s nice to see so much effort put in to offer accessibility and challenge where required, but it must be noted that many of the easy routines are often very dull in comparison to their more difficult counterparts. This is to be expected to a degree, but it would have been nice if the easy routines could have been a bit more varied and dynamic. 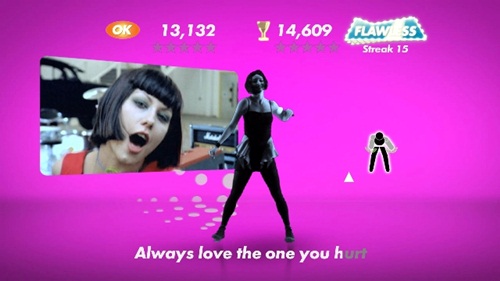 If you can’t stand the charts these days, then don’t expect much from Dancestar Party.

Routines can be tackled solo or with a partner for a specially choreographed duet version of each track, and multiplayer modes offer 2v2 shenanigans for up to twenty players. It might have been nice if such a round robin mode could be done with solo players, as there are plenty of people who don’t have the multiple Move wands required to use the multiplayer features. If you’re lucky enough to meet the hardware criteria, then Dance Central offers a suitably jolly and humorous multiplayer mode with the right company.

For those interested in other forms of competing, you can record custom dance routines to the game’s tracks and then have others compete against them later. This does mean the prompts for dance moves don’t show up as they do for the pre-set routines, but the motion control remains uniformly accurate, even on extremely bizarre creations. Speaking of recording, the Playstation Eye records various video and picture highlights as you compete in all games modes, making for some amusing viewing after. You can even upload these highlights directly to Facebook and Twitter, or to the Dance Central servers where the community can view and rate your efforts. You can even opt to sing along and get scored on your vocals as well, with a choice of using a USB mic/headset or the built in microphone on the Playstation Eye carrying your questionable melodies. The built in mic proved inaccurate during our testing unless you really belt the songs out, so alternate equipment is highly recommended for those with quiet voices. Regardless of this minor technical fault, it’s a fun addition that is unique to Dancestar Party. 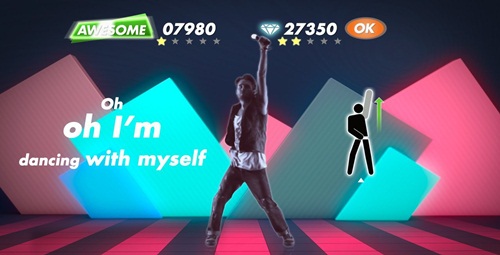 I guess they were going for functionality, but did they have to make it look so… plain?

Whilst the core gameplay of Dancestar Party is strong, the songs it is built around are lacking. There are certainly enough tracks, but there is a distinctive style of track that is catered for largely in the set list that won’t make it appealing to everyone. Whilst other competing dance titles offer more modern dance and hip-hop tracks along with the cheesier oldies, Dancestar Party offers almost exclusively contemporary music. This isn’t going to be a deal breaker for those who enjoy the music of this generation, but there is a distinct lack of variety in comparison to the more widespread tracks in the Just Dance series. The available DLC can make up for this with some great classics already being available, but if you want some 80’s cheese available on disc, you may be disappointed. 40 tracks is a decent number, but with Kung Fu Fighting being the only pre-90s track on disc, it isn’t going to be to everyone’s taste. This is of course a highly subjective matter, so feel free to ignore this particular criticism if you really can’t get enough Lady Gaga in your life. For those hoping for more of a choice than this, beware.

The other big issue with Dancestar Party is its severe lack of identity. It seems like an odd thing to criticise but, in comparison to the slick visuals in Dance Central and the cheeky neon style of Just Dance, Dancestar Party seems very bland. The on-screen dancers are various real life people captured on video, and the backgrounds are just the accompanying music videos to each track. It’s very functional, and there’s certainly nothing wrong with what they’ve gone for, but in adopting this unassuming visual style, Dancestar Party seems to lack the flair of its competitors.

Overall, Dancestar party is a highly functional dance title that effectively uses the Playstation Move controller. What it lacks in track variety it makes up for with diverse features, but the lack of an identifying visual direction makes the package feel somewhat tackier than the competition. If you only have a PS3 and want a fun dancing game, then this will serve you well. If you hate modern music and have other consoles available, then it’s likely that you’ll be better served by the Dance Central or Just Dance series.

A halfway house between the jovial Just Dance and more serious Dance Central, Dancestar Party offers a fairly standard motion controlled dance 'em up for the PS3 that has its rich features hampered by a poor track list

A copy of this game was provided by developer/publisher for review purposes. Click here to know more about our Reviews Policy.
Tagged With: Dancestar Party, ps move, ps3, sony