We take a closer look at the Metroid-esque sci-fi shooter.

Currently on Kickstarter for 10 more days to raise funds, with 325 backers having pledged 4934 GBP of the 50,000 GBP goal, InterWave Studios’ Dark Matter is a surprisingly atmospheric, highly thought out and yet, relatively simple game. Inspired by Metroid, the game sees you as the last surviving member, awakening from cryo-sleep on the Endeavour, a ship which has been ruthlessly taken over by a hostile alien force.

The alien force have gone about killing everyone in sight and breeding, virtually setting up their eco system aboard. Before you can really figure out what’s happening, you need to arm yourself and proceed with a few simple objectives. You’ll be guided by a virtual AI, the Companion, who sounds way more off-kilter than he should. There’s also that bit about the Angels, mysterious beings who sound way more fearsome than the bugs that’ve killed everyone on the ship. So there’s that. 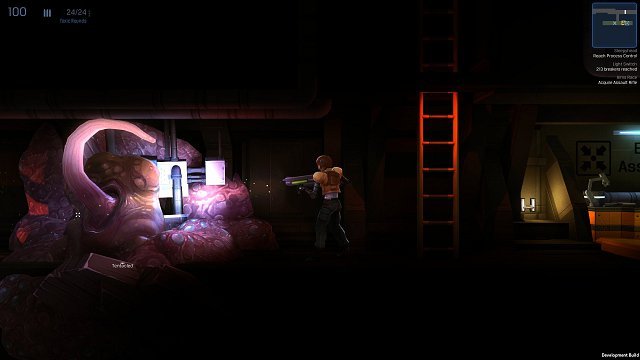 As you start out, you have the option of undertaking VR training to learn the game’s mechanics. Everything is fairly straightforward to this point, as the protagonist can jump, climb ledges, equip multiple weapons including an assault rifle, handgun, shotgun and more, along with different ammo types to inflict different levels of damage.

"Dark Matter’s aiming mechanic is interesting. You have hover your cursor over an enemy to sufficiently shoot them using the mouse, but can also drag your cursor ahead to shoot enemies that you can’t see. "

You wouldn’t think it at first, but that flashlight sees a lot of use. As you explore the Endeavour, there are several parasitic organisms which respond in different ways to light sources. One parasite shuts its jaws when you shine light on it, thus allowing you to walk past safely, while another glows fearsomely and can explode if you continue illuminating it. This makes for some interesting moments when the two are paired together, as you must think about how to proceed rather than running and gunning through hallways.

Dark Matter’s aiming mechanic is interesting. You have hover your cursor over an enemy to sufficiently shoot them using the mouse, but can also drag your cursor ahead to shoot enemies that you can’t see. As you encounter enemies such as the Baby Crawlers and Crawlers, this method turns out to be useful for avoiding damage. You can also sprint to put some distance between you and the parasites, but back-pedaling and letting them eat lead isn’t the best strategy here. That being said, refining your aim can be a little iffy.

In the preview build we played, it took a bit of time to properly fine tune your aim onto a Crawler – and when you’re using a weapon like the shotgun, which takes time between each shot, it can lead to a few annoying instances where you suffer damage simply because you didn’t orient your shots carefully enough. Of course, the Crawlers won’t be waiting around to get shot so it’s understandable. A little more tweaking should fix this problem. 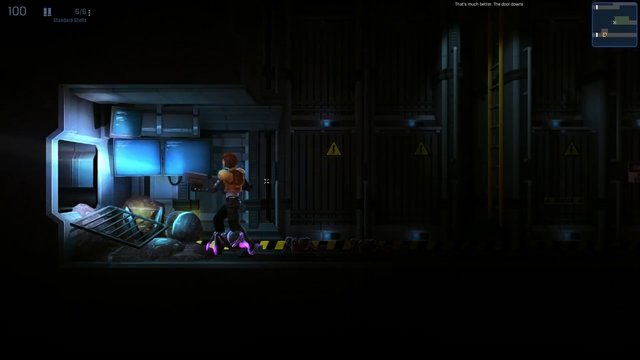 As it stands, the enemy AI is as it should be. There were times when the parasites began spazzing out and just moving about in one place, allowing for a good free shot. This didn’t happen too many times, and for the most part, the enemy AI is relentless.

" Enemies have a tendency of jumping out of vents, both behind you as you wait for an elevator to approach, or in front just as you’ve reached a major objective."

Level design is pretty solid. You’ll be navigating dark hallways, crawling through air ducts and working your way across many different areas of the Endeavour. Though you’ll mostly be slogging from one area to the next, there is still the constant fear as to not rush ahead. Each of your surroundings must be carefully approached. Enemies have a tendency of jumping out of vents, both behind you as you wait for an elevator to approach, or in front just as you’ve reached a major objective.

InterWave is working on many of the issues for the game, and correcting bugs overall. However, this all depends on the funding that the project receives. As the developer has noted, “In a somewhat ironic twist, the biggest delay to Dark Matter’s development could come from the success of this Kickstarter. The projected completion and delivery dates are based on the basic funding goal only.”

Either way, Dark Matter is already an immensely fun experience that still holds plenty of twists on the Metroid formula to be entertaining.