The edition sold out in less two hours. 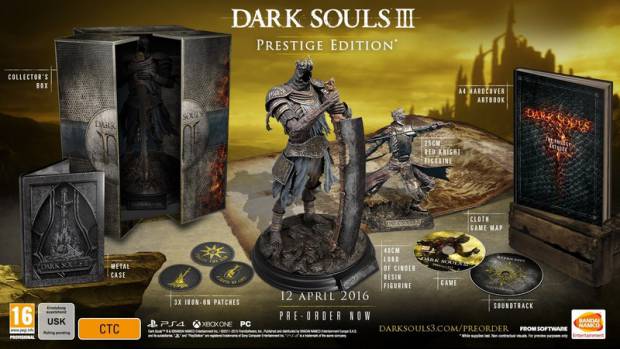 Hopefully any Dark Souls 3 fans who were wanting to get their hands on the special Prestige Edition did so quickly. The makers of the game, Bandai Namco announced this very limited edition of the game claim all the copies that were available sold out within two hours of being made available. It shouldn’t come as much of a surprise the Prestige Edition was quite popular considering all the different things that were being shipped alongside the game.

The title is just a few months from being released as well, so it’s not like this particular edition was released a long time before the launch date. Those who were lucky enough to pre-order this version of Dark Souls 3 are getting a 40cm Lord of Cinder figurine, a 25cm Red Knight figurine, the game’s official soundtrack CD, 3 Dark Souls 3 themed iron-on patches, a  really stylish cloth game map and the Dark Souls Trilogy hardcover artbook according to Videogamer.com.

It’s a safe bet those who were able to clean out Bandai Namco so quickly will be putting at least a couple of these editions on eBay shortly after they’re able to get them. With the ability to get the Prestige Edition now gone until after launch day, those who want to get something special with their Dark Souls 3 will have to resort to the Collector’s Edition which costs well over $100. Otherwise they’ll just need to buy the regular old version of the game when it finally launches on the Xbox One, PS4 and PC starting April 12.