“I wish there wasn’t a double standard and indie developers were given an equal opportunity to sell their games across multiple store fronts,” says the developer.

There aren’t a lot of topics in the industry right now that can cause as much controversy as the Epic Games Store, and it seems, thanks to Epic’s exclusive-poaching practices, that the digital storefront is making the headlines every other day. But while games both big and small have been declaring exclusivity for Epic’s storefront quite frequently, there are others that are doing the exact opposite of that. One such game is the indie adventure title DARQ, and recently, (mostly) solo developer Wlad Marhulets of Unfold Games shared just why exactly he ended up choosing to remain a multiplatform PC release.

Publishing a lengthy blog post on Medium, Marhulets explains that he was contacted by Epic Games – a couple of days after he announced DARQ’s Steam release date – who proposed to sign up DARQ as an Epic Games Store exclusive. After explaining that “every indie studio has a unique story and has to deal with unique set of obstacles” and that “rejecting such offer happened to be right for my game, but might not be right for other games / studios”, explained why he rejected it in the first place.

The reason, Marhulets explained, was manifold. For starters, he felt accepting a deal in exchange for an upfront payment and guaranteed revenue would have made sense in the short-term – it’s something that a lot of developers have openly cited as the reason for going exclusive to EGS, in fact – but in the long-term, doing so merely days after announcing the game’s Steam release date would affect his studio’s credibility with the larger audiences.

“Although I’m a first time developer, I’m very serious about working in this industry for a very long time,” he explained. “I had just announced DARQ release date on Steam – pulling the game off Steam a few days after Steam release date announcement would forever ruin the credibility of my studio. I would like for my customers to have confidence that my word means something, especially when making announcement as crucial as release date / platform. Turning down the Epic exclusivity offer might have been a foolish decision in the short term, considering the amount of money that might have been involved. When thinking long term, however, this was an easy & obvious decision to make (in my case).”

Marhulets also mentioned that DARQ has been listed on Steam since late 2018, and that in the time since then, has popped up on the wishlists of a large number of Steam users. “A lot of Steam users added DARQ to their wishlist and patiently waited for its release date for almost a year,” he wrote. “Pulling the game off Steam, especially so close to the release date, would surely make a lot of DARQ fans unhappy.” Which makes sense- one only needs to look at Shenmue 3’s EGS announcement after the game’s Kickstarter backers had already been promised a Steam release a long time ago. Marhulets also added that though he will probably make less money off DARQ by being on Steam instead of opting for the Epic Games Store exclusivity deal, in his view, it’s “a fair price to pay for establishing an ongoing trust between my studio and its customers.”

Finally, Marhulets also expressed the importance of giving customers options – DARQ itself is also going to be available on GOG in addition to Steam – before pointing out the disparity between how major AAA releases aren’t bound to exclusivity to be sold on the Epic Games Store, which doesn’t seem to be the case for indie releases. “I wish the Epic Store would allow indie games to be sold there non-exclusively, as they do with larger, still unreleased games (Cyberpunk 2077), so players can enjoy what they want: a choice,” he wrote.

Marhulets also specifically called out a tweet by Epic Games CEO Tim Sweeney, in which he encouraged having a “multi-store” future for the PC market that wouldn’t fragment the community, before mentioning that that public stance seems to be directly contradicting Epic’s internal policies, based on the fact that he had been told that exclusivity would be a requirement for DARQ to be sold on their store.

“I wish there wasn’t a double standard and indie developers were given an equal oportunity to sell their games across multiple store fronts, so the players can enjoy what they seem to want the most: a choice,” he said, and also shared screenshots of his emails with Epic Games Store regarding the same. You can take a look at the screenshots below.

It’s a bold move to be so open about his communications with Epic, that’s for sure, but it’s one that sheds a lot of light on how the company has been approaching its exclusivity policies with the Epic Games Store. The disparity between the treatment of AAA releases and indie titles seems unfair, to say the least, so here’s hoping this will provoke some sort of a reaction sooner rather than later.

It doesn’t look like Epic is going to stop announcing exclusives for its storefront anytime soon though- we’re in line for even more announcements at Gamescom Opening Night tomorrow. Stay tuned for all the updates. 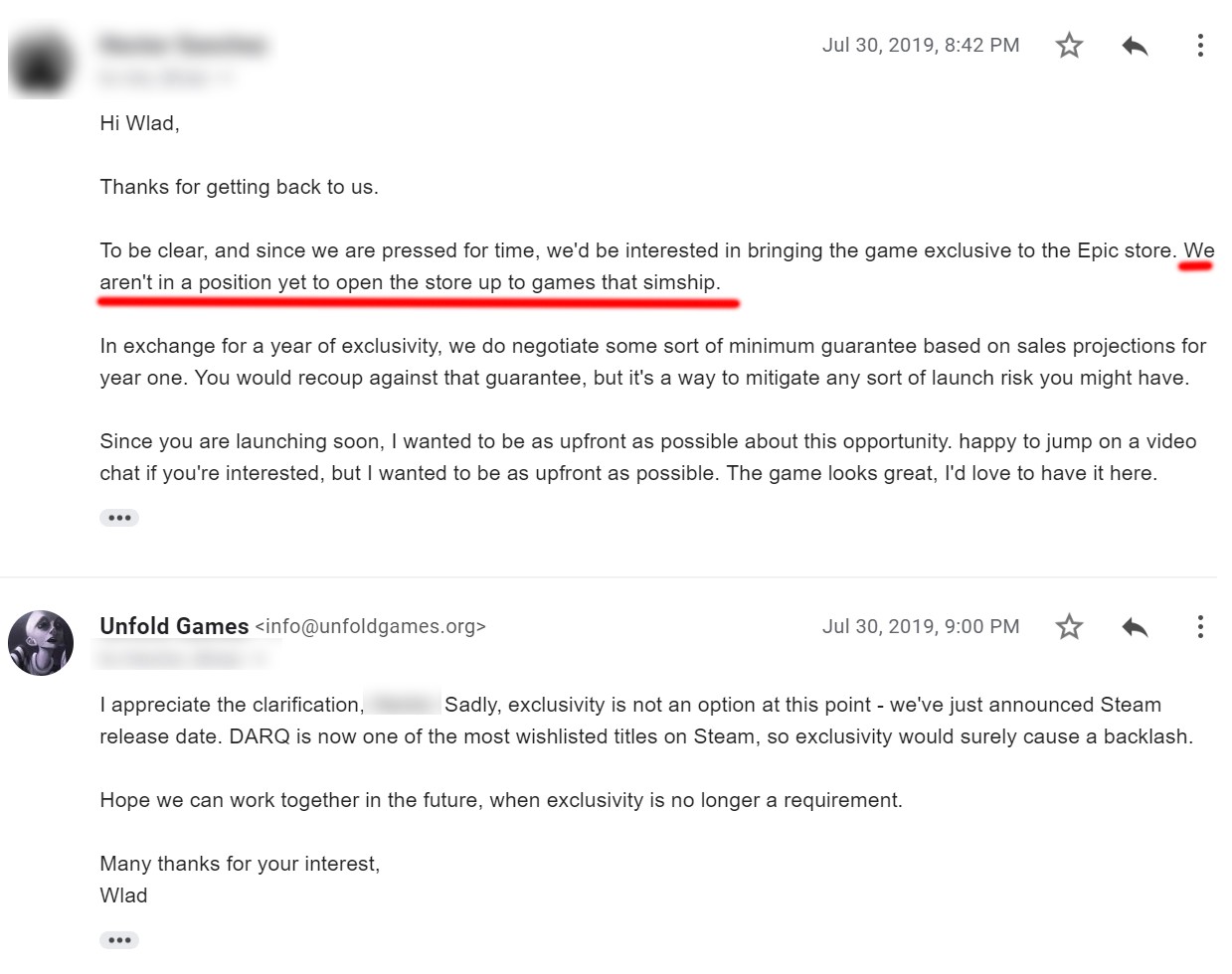