Get busy huntin’ or get busy dyin’.

Posted By Will Borger | On 26th, Jun. 2018 Under Article, Previews | Follow This Author @will_borger

Certain genres are harder to break into than others. Shooters, RPGs, strategy games, and action-adventure titles are pretty common, and those genres are diverse enough to accommodate new titles without drawing comparisons to specific franchises or game mechanics. New military shooters are a dime a dozen, but they’re not all like Call of Duty or Battlefield. Some games, though, are so successful that they essentially become their genre, and every game that releases inside of that genre is essentially competing with that game. You know the names: World of WarCraft, League of Legends, Fortnite, Minecraft. If you wanna compete as a MMO, in the MOBA space, the Battle Royale genre, or with… whatever it is that Minecraft does, you gotta figure out a way to be better than or different in a meaningful way. This isn’t easy; most games fail. Look at the MMOs that were dubbed “WoW Killers” or the games that tried to go toe-to-toe with League of Legends. The annals of gaming history is a graveyard for also-rans.

Monster Hunter is one of those games. The series is legendary in Japan, and has built what was once small cult following in the West into a large, devoted fanbase. The monster hunting genre, for all intents and purposes, consists of Monster Hunter. Entering this genre is dangerous: you have to appeal to the folks who already love what Monster Hunter offers without being so similar to what it offers that you’re trampled by Capcom’s behemoth as it races to its next sales milestone. For a game like Dauntless, that wears its Monster Hunter influences on its sleeve, being successful doesn’t mean being a good game that meets a financial goal. It means surviving. 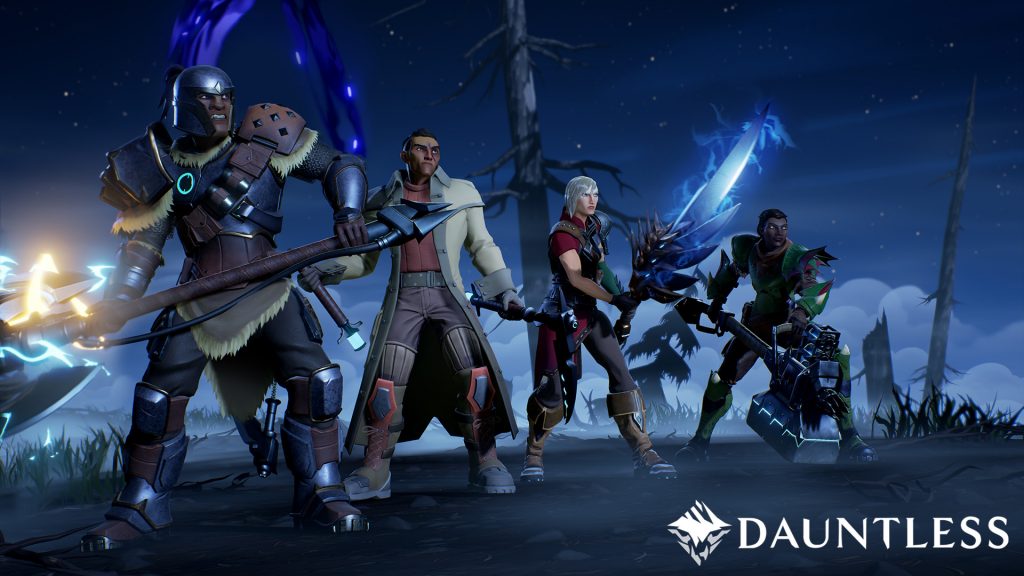 "Your character is a Slayer, a member of a order of monster hunters that has been around for a long time. But with settlements under attack, your job is more important now than ever. There is a plot here: you get missions from characters with names that allegedly have a purpose in the larger world, but the game is mostly focused on shorter, stand-alone missions known as hunts where you… wait for it… hunt monsters."

Whether or not Dauntless survives is anyone’s guess. The game industry is fickle and hard to predict. But what the fine men and women of Phoenix Games – founded by core members of Riot Games, best known for League of Legends – have done is make a game that has promise. If you’re not familiar with the monster hunting genre, it’s pretty simple: you, and sometimes a group of friends or strangers and combinations thereof, murder giant monsters for fame, cash, and that monster’s fleshy bits. You then synthesize these fleshy into better weapons and armor, which you then use to murder more monsters for even more impressive fleshy bits. Rinse and repeat for a few hundred hours and you have a monster hunting game.

Like many games in the genre, Dauntless doesn’t feature much of a story. The game takes place on a floating set of fantasy islands that are in various states of brokenness known as the Shattered Isles. There’s been monsters, known as “Behemoths” on the Isles for as long as there’s been people, but recently the humans have been pushing farther into the frontier to establish new settlements, and as we all know, when you push the frontier too far, it starts to push back. Your character is a Slayer, a member of a order of monster hunters that has been around for a long time. But with settlements under attack, your job is more important now than ever. There is a plot here: you get missions from characters with names that allegedly have a purpose in the larger world, but the game is mostly focused on shorter, stand-alone missions known as hunts where you… wait for it… hunt monsters.

Simple set-up aside, the game is pretty fun. The world features a simple, cartoonish art style that belies how gorgeous and colorful the game world is. The water is a clear blue, the trees are tall and leafy, and the skyboxes are incredible. The can’t tell you how many times my partners and I said, “This is a really pretty game.” It feels like a fantasy world, but as lovingly rendered as the world is, the monsters are the real stars of the show and how you’ll approach them is largely dependent on what weapons you equip. As of this writing, there’s five weapons in the game: a sword, an axe, a pair of chain blades, a hammer, and a war pike. Each one plays pretty different, relying on a combination of standard light and heavy attacks, a special ability, and a unique dodge. The axe rewards you for nailing the timing on heavy attacks, while the chain blades rely on extreme speed to get you in and out before you get hit. The sword is a good all-arounder and the war pike lets you poke from a distance. Each weapon comes with its own set of combos, dodge, and a special ability that charges as you wail away on your Behemoth of choice. 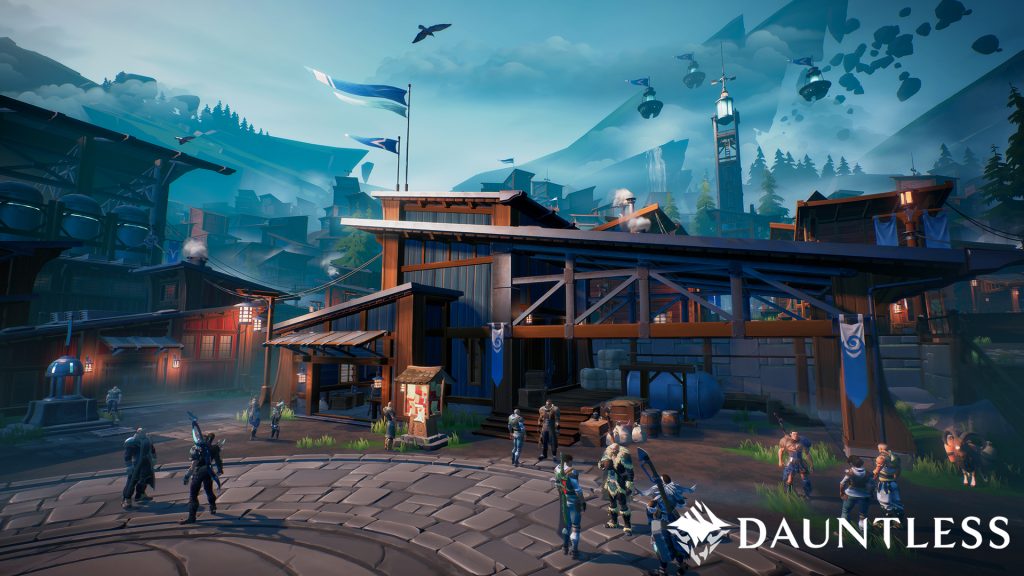 "You start in Ramsgate, the standard-issue social hub populated by other characters, where you’ll craft weapons and armor, make potions, and pick up quest. Once you’re outfitted and good to go, you simply select a mission or area from the world map, get paired up with up to three other players, and off you go to hunt a Behemoth. "

The chain blades, for instance, will let you channel your inner Kratos with their long, whirling combos. Their special ability speeds them up even more, and their dodge functions as more of a long range dash than a traditional dodge. The sword is easy to pick up for newcomers, with simple, damaging combos that are neither too slow nor too fast and a Dark Souls-style roll dodge that makes getting out of the way a snap. Its special ability is a beam that does big damage – and buffs your attacks for a little while afterwards. The other two weapons already mentioned operate in similar ways, but the most unique is the hammer, which operates like a Final Fantasy gunblade. Burning a charge before a swing connects will beef it up with extra damage, but you can also burn one independently for a ranged attack and even use a couple to get an explosive jump. Reloading the weapon requires a Gears of War-like mini-game: get the timing right and you’ll get a faster reload and more damage. Get it wrong, and you’ll be stuck trying to jam in a fresh clip as a monster bears down on you. This mechanic, combined with the hammer’s slow swings and harsh demands in terms of timing, made for a weapon I was absolutely lousy with, but one I couldn’t wait to explore further.

However you kit out your character, hunts work the same. You start in Ramsgate, the standard-issue social hub populated by other characters, where you’ll craft weapons and armor, make potions, and pick up quest. Once you’re outfitted and good to go, you simply select a mission or area from the world map, get paired up with up to three other players, and off you go to hunt a Behemoth. Hunts tend to start slow. An airship drops off your motley crew and you’re left to explore the area, gather items, and find your monster. Hunts are timed – the excuse is that the airship only has so much fuel – but you have enough time to explore. Exploring and picking flowers can be fun, but things really pick up once you find your monster.

Each one is unique, with its own set of attacks and fighting style. The Gnasher, for instance, is heavily armored and will swing its tail, go underground, and roll at you, while the airborne Shrike will fly at you at high speeds, come crashing down in the air, and make tornadoes that cover large areas of the map. Killing each monster means learning its patterns and being careful: a few hits, and you’re out. Getting knocked out isn’t too much of an issue, since your team can pick you up, but if it happens too many times, the monster will enter an enraged state and become much harder to kill. Managing your health and stamina, and learning the best way to take down a monster, are paramount. 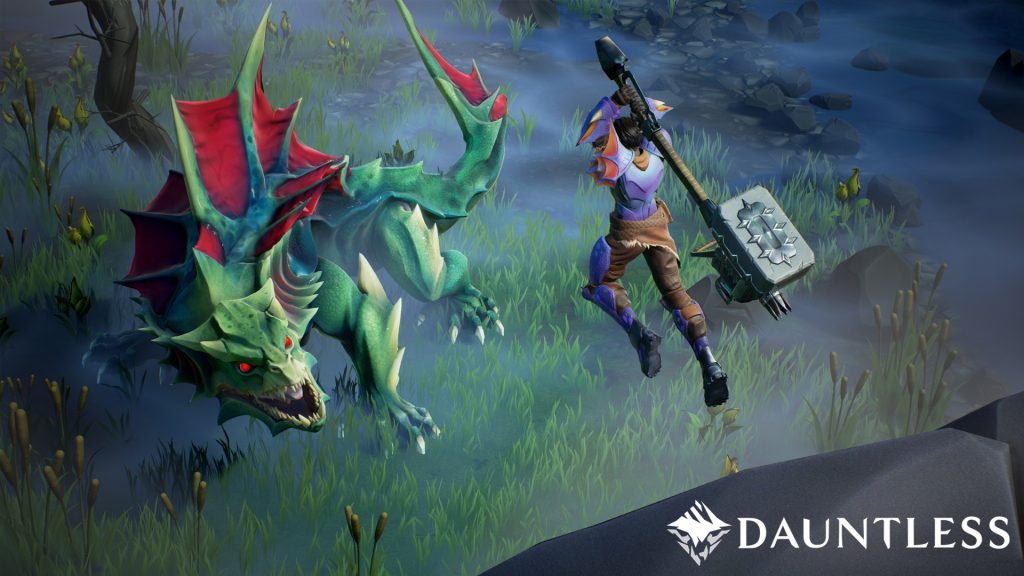 "Phoenix Games deserves credit for making a game that evokes the best aspects of Monster Hunter while being accessible and unique, and for making a free-to-play title that doesn’t feel like it’s trying to part you from your money at every turn."

While the combat is fun, killing the same monster over and over to get that one piece of loot you need to craft your armor can get a bit repetitive. Still, the moment to moment action remains strong, and the monsters are fun to fight. The game even manages to handle its free-to-play nature well, as the only upgrades you can purchase are cosmetic. The real stuff you’ll have to earn. The game has other flaws, too: there are currently no ranged weapons as of this writing and there also no way to go gather plants and other items without fighting a monster.

Still, this is just a beta, and what’s here is quite good. Phoenix Games deserves credit for making a game that evokes the best aspects of Monster Hunter while being accessible and unique, and for making a free-to-play title that doesn’t feel like it’s trying to part you from your money at every turn. In fact, it’s possible to play the entire game without ever entering the shop, something other games who have adopted this business model could learn something from. Dauntless has a long way to go before it’s able to compete with Monster Hunter – it needs more weapons and monsters, and that extra push to keep people coming back beyond “Don’t you want a better sword?” But if this beta is anything to go by, it’s off to a good start. So if you’re interested, get out there, Slayer. These Behemoths ain’t gonna hunt themselves.

The game was previewed on the PC.