Dauntless Wiki – Everything You Need To Know About The Game

Everything you need to know about Dauntless.

Dauntless is an upcoming free-to-play action RPG that is currently in development at indie studio Phoenix Labs, a team that was formed relatively recently. The game is heavily inspired by Capcom’s Monster Hunter titles, and just like those games, while it places a focus on 4 player co-op gameplay, it can be played entirely solo as well. It is currently in open beta.

Phoenix Lab is a relatively smaller independent studio that was formed in 2016, but houses talents from across the top developers across the industry. The studio was founded by Jesse Houston, Robin Mayne, and Sam Bender, who was formerly members of the team at Riot Games, developers of the uber-popular MOBA League of Legends. Over time, Phoenix Labs also amassed talents from some of the other top developers in the industry, including the likes of BioWare, Capcom, and Blizzard Entertainment. They announced Dauntless, their first project as a studio, in December of 2016.

Due to it being heavily inspired by Capcom’s Monster Hunter franchise, some have claimed that the indie title may not be able to compete against the former’s dominance of the genre, however the development team at Phoenix Labs has stated that they welcome the healthy competition, and that their free-to-play model will allow their game to hold its own. Dauntless, as such, is going to be a free-to-play title, and as a result, will also make use of microtransactions.

However, the developers have clarified that these microtransactions will be limited only to cosmetic items, since they do not want their game to resort to a pay-to-win model, and want to make sure that any rare and powerful gear, weapons or equipment players have is earned rather than bought. They had initially planned to include loot boxes for these cosmetic items, but after the controversy caused by the inclusion of loot boxes in EA’s Star Wars: Battlefront 2 in late 2017, they decided to drop the idea. Instead, Dauntless will now allow players to purchase cosmetic items directly for real-world currency.

Regular post-launch free updates for the game have also been planned. Additionally, Dauntless also won’t be going for a photorealistic visual look, and in order to make sure that its visuals age well with time, it will instead feature a distinctly more cartoony art style similar to Disney’s animated movies. Though Dauntless is currently only planned as a PC exclusive title, Phoenix Labs have expressed interest in bringing the game over to consoles somewhere down the line. 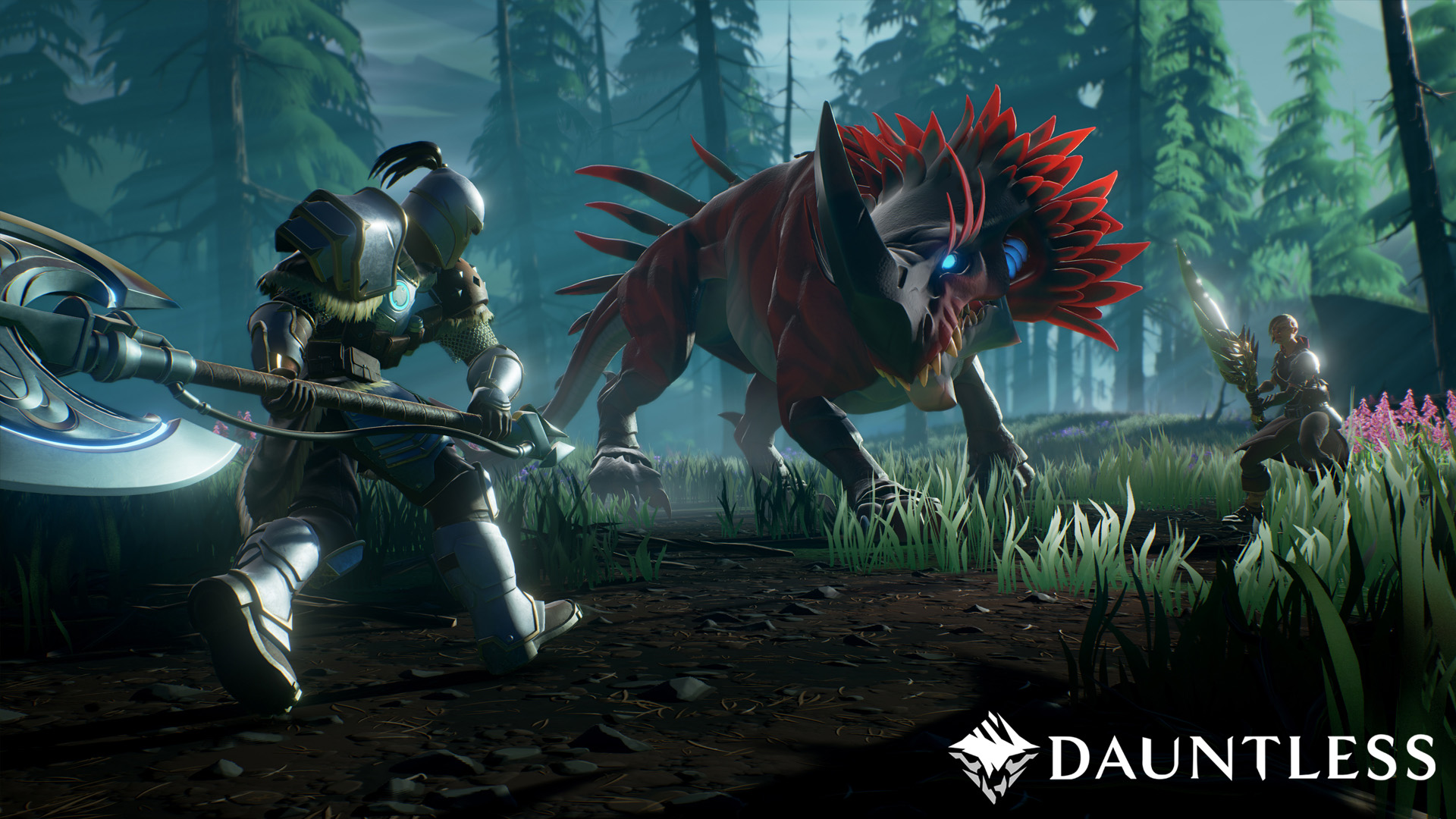 Dauntless takes place in a fantasy setting called the Shattered Isles where a cataclysmic event tore the world apart, in the aftermath of which humankind lives and struggles to survive in a harsh and unforgiving world. The world is now brimming with large, vicious, and deadly monsters known as Behemoths, of which there are various kinds and growing by the day. The last defence humanity has against the Behemoths is a group of elite warriors known as Slayers, who hunt these Behemoths in order to quell their threat.

Dauntless draws many comparisons with Monster Hunter, which makes sense because the game is openly inspired by Capcom’s action RPG franchise, and features the same core gameplay loop. Players are tasked with hunting down Behemoths- these hunts can take upwards of twenty to thirty minutes at times, and killing Behemoths nets players with rewards and parts which they can then use to craft better gear and equipment, while better performances in these hunts and more efficient dispatching of Behemoths results in even better rewards, all of which is something that Monster Hunter employs in its loop as well. While the game can be played solo, the intended way of playing it, as per the developers, is co-operatively, in a party of four players.

There will be several Behemoths in the game, with each being distinct from the others in terms of designs, the kind of threats they pose, and the strategies they require to be brought down. Players are required to use a combination of skill, tactics, planning, and upgrading equipment to take down Behemoths. Behemoths will often also have weak spots for players to target and exploit, which might require teamwork with other players partnering with them during hunts. The game also promises to have fast paced combat which will be combo-based, while there will also be several unique weapons and weapon types for players to use, such as hammers, swords, and axes, each with their own advantages and disadvantages and methods of use.

Many weapons will also be able to use elemental attacks, for which they will drawn on the aether from the environment, the same force that also gives strength and life to the Behemoths themselves. Players must also constantly keep an eye on their own health and stamina gauges. The game also lets player craft a large variety of items which can also give players buffs and advantages during combat and can also be mixed together to produce different results. Dauntless will also feature a large map for players to explore, as per Phoenix Labs, which will play host to several varied locations. The game also features a hub town, similar to Monster Hunter games, called Ramsgate, where players as Slayers return after hunts to use their earned loot and materials to craft better and more powerful gear.

Armour sets can also be customized with modifiers, while they also come with unique characteristics in the form of perks, which give them added boosts and advantages to suit the player’s play style. In this manner, even armour sets that have relatively weaker ratings can be viable options for players, because they may have perks that might prove effective and useful against a specific kind of Behemoth or be more suited in general to a player’s particular style of play. 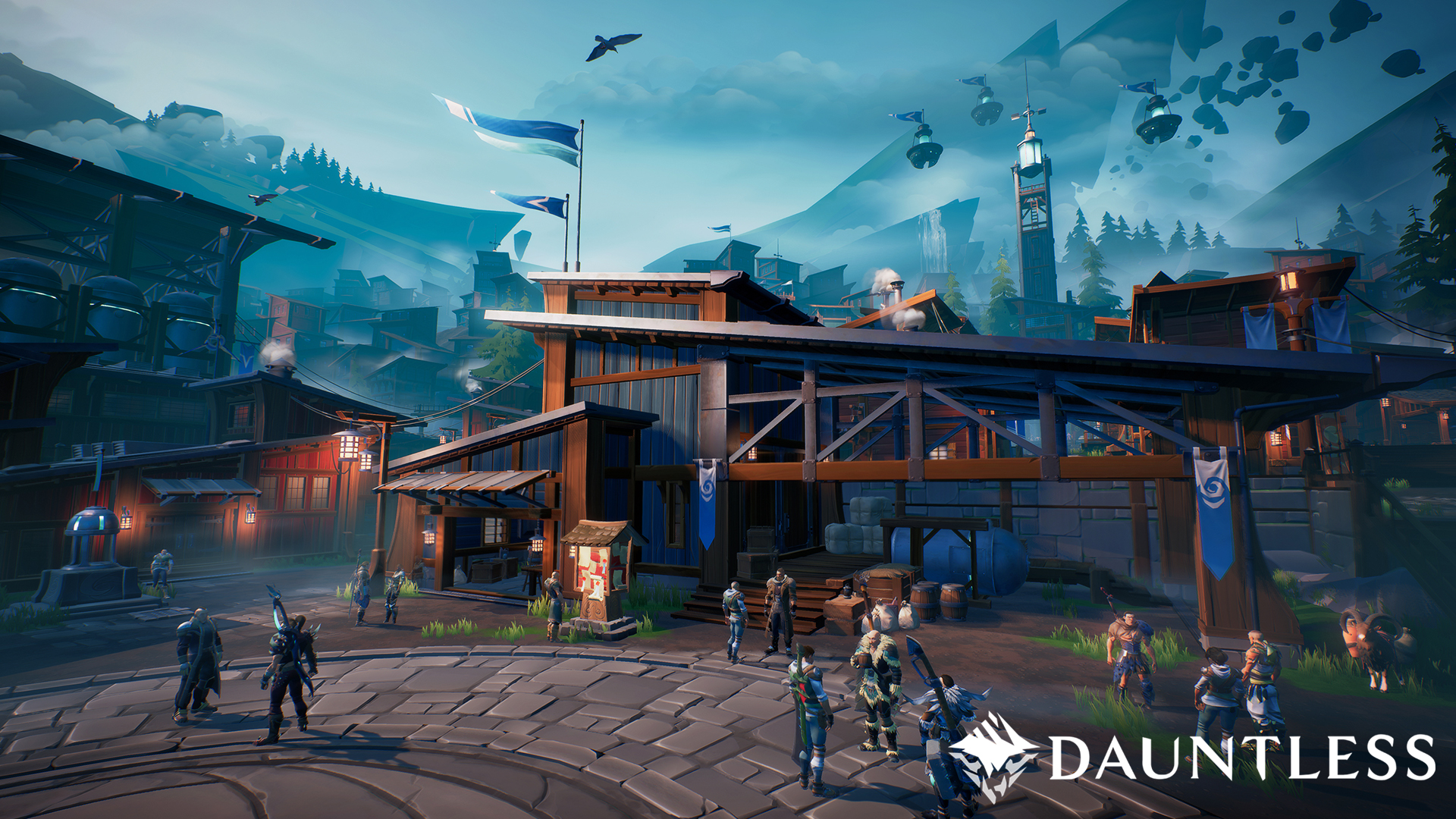 While Dauntless draws inspiration primarily from Monster Hunter, it takes cues from other games such as Dark Souls and World of Warcraft as well. Phoenix Labs aim to make it possible for players to pour hundreds of hours into Dauntless, like with Monster Hunter, while taking cues from Dark Souls to implement meaningful PvE gameplay that involves “hardcore” and challenging action RPG mechanics, as well as including endgame activities that will provide a gruelling challenge, as is often seen in endgame activities in the MMO World of Warcraft.

As such, Dauntless is set to be a very difficult game, and while most players, according to Phoenix Labs, will be able to able to finish the game’s main quests, endgame activities will be considerably more challenging, and only the most skilled players will be able to take these on and successfully beat them. Dauntless will also have social elements, which is one of the ways Phoenix Labs plan to set their game apart from Monster Hunter, and will include multiplayer interactions similar to what is seen in games such as World of Warcraft.