Days Gone ran into a bit of a problem when it released in 2019. The problem was that the game said Sony on the box, and PlayStation exclusives come with standards these days. Players expect big budgets and the production values that accompany them, accomplished storytelling, and solid, but probably not revolutionary gameplay. Most of all, they expect polish. Sony has made its bones on delivering consistently high-quality, narrative-driven single-player titles. Those titles may not be the deepest or best-playing games on the market, but they almost always play well enough, and they tend to do almost everything around their gameplay better than most in the industry.

And then came Days Gone. The game released to middling reviews in 2019, but the PC version gives us a chance to reevaluate it, and based on my experience, I think folks will be more positive on the game this time around. If you’re not familiar with it, Days Gone is an open-world survival action title set in a post-apocalyptic Oregon that has been overrun by Freakers, the game’s term for zombies. Yes, Days Gone is a zombie game, but it’s one of those, a story about zombies that categorically refuses to use that word as though it somehow makes the game’s story less generic. It’s a terrible name, and Days Gone’s use of it should tell you a lot of you need to know about the game’s writing.

"Days Gone‘s story tries a lot of things – some work and some don’t, and that’s fine – but what bothered me most was the game’s dialogue, which is all over the place. Some of it is legitimately great, but just as much doesn’t land."

Players are dropped into the cut of Deacon St. John, a biker who lost his wife when the world ended, and still insists on wearing his Mongrels MC cut as though it and the patches on it mean anything anymore. A man’s got to have a code, you see. Deacon pals around with Boozer, his brother in arms from the good old days, doing jobs for the local survivor camps but never joining up with them. “Live free, don’t join” seems to be the pair’s model, and to their credit, they’ve made it work so far. Deacon isn’t the most original character, but I did enjoy him and while he (understandably) starts off as a bit of a jerk, he does get better as the game goes on. Praise also must be lavished on Sam Witwer, who gives an excellent performance.

If Deacon does have an issue, it’s his utter inability to shut up. He is constantly talking to himself, and I mean constantly. Some of these instances work fine – when you’re burning out several nests of Freakers, say, and an appropriately nervous Deacon is trying to psyche himself up or patting himself on the back for a job well done – but sometimes they can ruin the mood, too. Pick up an item? Deacon’s gonna tell you it’s useful. Do something cool? Deacon’s got a quip. Get lost? Deacon is here to tell you what you need to know. Listening to the crazy survival nut on the radio? Deacon’s gotta let him know how wrong he is, usually by yelling so loudly it echoes in the surrounding environment. Some of these are fine, and the lattermost is generally funny (and relatable, I hate those guys, too.) if a bit unrealistic – sound attracts Freakers, so you’d figure the last thing you’d ever want to do is yell – but the constant barrage of can sometimes ruin sequences that would be more somber, terrifying, or otherwise awe-inspiring if the player could just focus on absorbing them instead of on what Deacon is saying.

Days Gone’s storytelling is an equally mixed bag. It tries a lot of things – some work and some don’t, and that’s fine – but what bothered me most was the game’s dialogue, which is all over the place. Some of it is legitimately great, but just as much doesn’t land, largely because Days Gone tries to emulate how people actually talk, pauses and repetition and all. Sometimes this works, but it just as often makes for awkward transitions where you can tell the dialogue is trying to deliver exposition and winds up repeating the obvious or have gravitas and instead serves up cheese. The other major storytelling issue is the game’s cutscenes, which feature black screens between transitions. It’s awkward, given how well the game looks and animates and how good the acting is, though it wouldn’t be an issue if there just weren’t so many cutscenes. It’s entirely possible to go from a cutscene to a scripted sequence to another cutscene without having done much as a player, and it can be a bit frustrating when you just want to play the game. 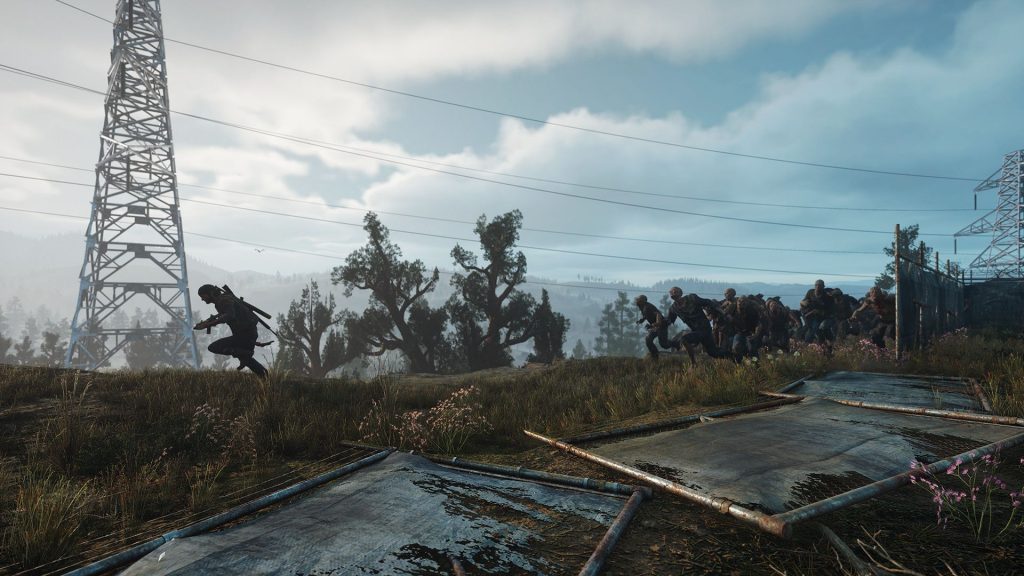 " I’m not kidding when I say that I spent a lot of time admiring how gorgeous Days Gone is; it’s one of the most beautiful games I’ve ever played, and while the upgrades Sony Bend made aren’t transformative, they easily make this the best version of the game."

What Days Gone does do well, however, is the world, atmosphere, and gameplay, and this is where the PC’s improvements begin to come into play. Days Gone is a gorgeous game, and the PC version just makes it better. The major improvements here are based on the level of detail and draw distance, particularly in terms of foliage, which has a huge impact on selling the vastness and beauty of the Pacific Northwest. Static and dynamic objects are also more detailed, as are the game’s shadows.

There are no huge overhauls here – ray-tracing and DLSS AI upscaling are absent – but the upgrades here are appreciated, as is the support for unlocked framerates and ultrawide monitors. I’m not kidding when I say that I spent a lot of time admiring how gorgeous Days Gone is; it’s one of the most beautiful games I’ve ever played, and while the upgrades Sony Bend made aren’t transformative, they easily make this the best version of the game.

The game also offers mouse and keyboard support, and the team at Sony Bend has clearly put in a lot of work to make sure the game plays well on a keyboard and mouse. The controls are mapped nicely by default, but you can naturally remap things and change your sensitivities around if you like. Aiming in particular is a huge upgrade on a mouse and keyboard, and I found it much easier to nail difficult shots with on a mouse. There’s also gamepad support, which works just as well. No matter what you choose, Days Gone plays well, and quality of life improvements like a FOV slider made a big difference. 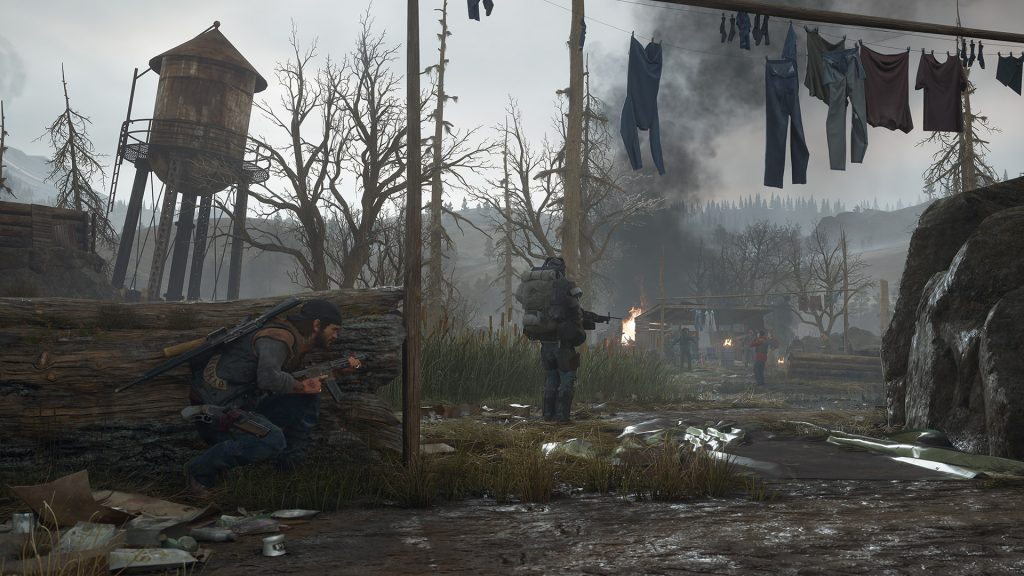 "None of this is particularly new, but Days Gone does it well. The gameplay is also surprisingly thoughtful, and always giving you choices."

This is good because Days Gone plays well. In fact, the gameplay loop is really the reason to play the game. Days Gone is a survival game, which means the player will spend most of their time scavenging items, ammo, weapons, and just about everything else as they fight the Freakers. Like most modern games, there are RPG elements, too, allowing players to upgrade Deacon’s bike, abilities, and everything else. None of this is particularly new, but Days Gone does it well. The gameplay is also surprisingly thoughtful, and always giving you choices. Sure, you could speed through an area on your bike, but the noise will attract Freakers. Sometimes it’s better to sneak through, especially if you’re low on ammo.

Thinking about hitting a quest on your way back to base? Better make sure you have the fuel to get you home, or you might end up having to walk your bike back to base, as I once did. Taking on a Freaker nest? You can hit them during the day or at night, both of which have benefits and downsides. One might offer weaker enemies, but the other will mean you fight less. Even the gameplay itself is tactical: it takes Deacon a moment to properly sight in on an enemy, meaning you’ll have to take your time if you want a headshot. Managing fuel, resources, health, and other items means encounters are always intense, whether you’re fighting Freakers or hostile humans, which will engage you in different ways. It doesn’t hurt that everything, from riding your motorcycle to firing a gun or swinging a bat at a Freaker, just feels and sounds really good.

It’s here that the PC delivers its final upgrade. Hordes are Days Gone’s biggest spectacle moment, as hundreds of zombies come at you as though they’re a single, moving object. They were impressive enough in the base game, but the PC version ups the count from 300 in any given horde to 500, and it’s nice to see Days Gone’s biggest and most unique mechanic get an upgrade. 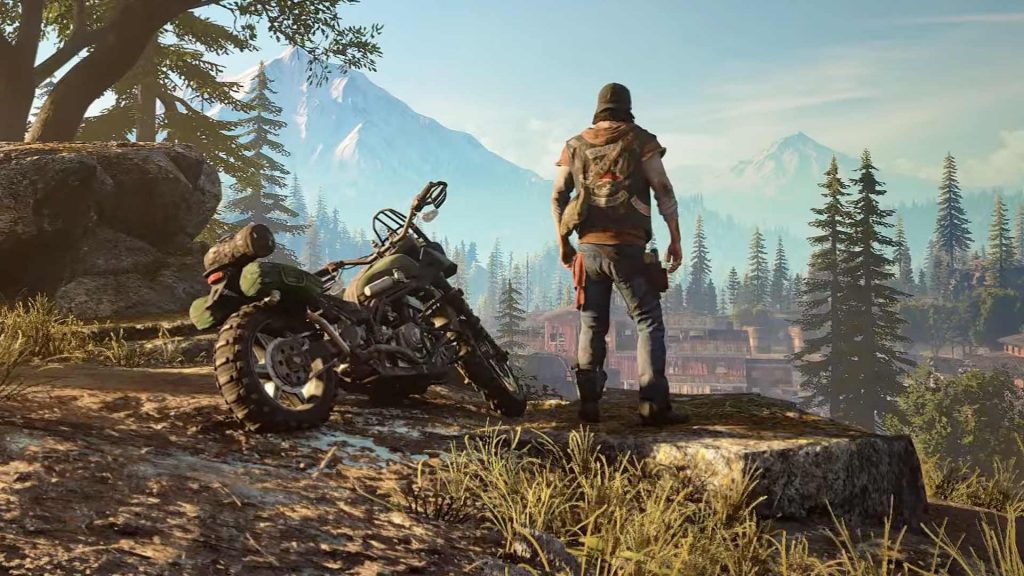 "Days Gone may be flawed and a bit generic, but I did enjoy playing it, and getting to know Deacon and company, more than I thought I would, and the PC version of the game is easily at its best."

Days Gone largely runs well on PC, but I did encounter some technical issues. While the game ran at a rock-solid 1080p and 60 FPS on my RTX 2060 Super and i5 6600K most of the time, it did suffer some dips during heavy rainfall. In another area, it also had issues loading textures and geometry properly, resulting in untextured, strangely constructed areas where cars stuck out of the ground. Aside from those two instances, however, Days Gone ran very smoothly for me, and I rarely had issues.

Days Gone is an interesting game. It’s deeply flawed in some ways and excels in others. I don’t think it’s Sony’s best game, but I do think that the PC release allows it to be the game it probably should have been at release, a couple of technical issues aside. Days Gone may be flawed and a bit generic, but I did enjoy playing it, and getting to know Deacon and company, more than I thought I would, and the PC version of the game is easily at its best.

Deacon's a solid character and Sam Witwer plays him well. The game feels really good to play. Lots of options at any given point. Survival mechanics are well done. An interesting world to explore. It looks and sounds gorgeous. The PC port is largely technically solid and makes the most of the platform.

The writing is all over the place. Deacon talks too much. Awkward transitions between cutscenes and gameplay.

Final Verdict:
GREAT
Days Gone's PC port doesn't fix the game's generic premise or writing issues, but it does offer a slew of technical improvements that takes advantage of the PC's better hardware. Pair those with a compelling world and some great gameplay and you have an adventure that's better than it's often given credit for.
A copy of this game was provided by Developer/Publisher/Distributor/PR Agency for review purposes. Click here to know more about our Reviews Policy.