Dead Cells is a thrilling game but doesn't reinvent much.

I went into Dead Cells relatively blind and not knowing what to expect outside of it being yet another metroidvania and/or rogue-lite game with a retro-ish art style. Modern gaming is certainly littered with experiences of this sort and I wasn’t surprised to find many of the objectives and mechanics that I did, but once I really got into the loop of exploring, killing things with the tight combat, beating mini-bosses and subsequently upgrading my weapons and abilities, and also unlocking new abilities that open new pathways, I generally felt good about it and I enjoyed my time with Dead Cells, overall. The first thing you’ll notice is the absolutely beautiful art style that is sure to age well and keep this game looking great many years after many other games that will come out this generation.

But the one big surprise here, and the thing that really aims to set Dead Cells apart from the plethora of other games in its genre is the fact that it is both metroidvania and a rogue-lite in that it does have the procedurally-generated-stuff-until-you-die-then-do-it-again loop of the rogue-lite games but with the explore-until-you-get-new-abilities-then-backtrack-to-explore-areas-you-couldn’t-previously-reach loop of the metroidvania games on top of that. This is a combination that doesn’t exactly require a brain surgeon to come up with, and ultimately didn’t make the game feel as unique as I suspect the developers thought it would, but I will say it is a nice twist on both formats, and fans of of either should get plenty of what they want out of Dead Cells.

"As is to be expected when combining elements from other genres, nailing the fundamentals of a genre can also mean bringing along some of the baggage, and while Dead Cells does do a notable job at minimizing this, the repetitive level structure of many lower-tier rogue-lite is certainly here and it was something that I quickly noticed."

On top of nailing the fundamentals of the genres it so clearly emulates, Dead Cells also has very tight combat. The hand to hand weapons and the projectiles all feel great to use and you will quickly settle in to getting good at any of them. I also appreciated how the different styles of combat are divided into different types to cater to different play-styles, and you can choose to upgrade any of them when the time comes to do so, but honestly, I think Dead Cells’ combat was most fun for me when I traveled outside of my comfort zone and started experimenting with different combat styles and combinations of weapon types I wouldn’t normally use.

New weapons and abilities are very common and you’re never stuck with a setup you don’t like for very long, so why not play around with them? On top of that the secondary abilities and potions are easy to use and instantly understandable with a very well-designed interface. They really found a way to make every aspect of the combat and asset management feel accessible and relatively deep at the same time, which isn’t something that can be said about too many bigger-budget Triple-A action games these days. I also appreciated how the traversal abilities aren’t eliminated by dying and “starting over”, staying just shy from the true meaning of permadeath in favor of letting the player feel some sense of stability, even after dying.

As is to be expected when combining elements from other genres, nailing the fundamentals of a genre can also mean bringing along some of the baggage, and while Dead Cells does do a notable job at minimizing this, the repetitive level structure of many lower-tier rogue-lite is certainly here and it was something that I quickly noticed. This certainly doesn’t bring the game down to the level of some of the lesser rogue-lite games we’ve seen in recent years, not even close, but it does lessen that rewarding feeling that you’re supposed to have when you unlock a new area when it looks and plays almost exactly like all of the areas before it, the only major difference being that this area will be harder. 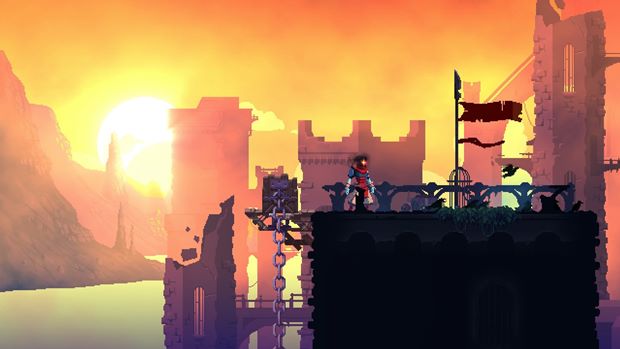 "Dead Cells gives fans of metroidvania and rogue-lite games what they will generally expect from this game, and even a bit more with slick combat and an extremely intuitive progression system."

Yes, this is something that tends to just go along with games of this type, but I was disappointed to see that developer Motion Twin’s fresh take on the genre doesn’t go much further than just getting the things that other games have already gotten right, and passes on the opportunity to improve on the things that they don’t. It also doesn’t help that the story is paper thin, and almost gives you no motivation outside of the need to gather cells for your character’s decaying body. Not that a game with this much emphasis on combat really needs much of a story, but it would have been a nice improvement on the tropes of the genre to create more narrative reason and incentive to do what we’re doing here. This lack of innovation and hyper-focus on fundamentals probably won’t bother most fans of the genres that Dead Cells is bringing together, but it will keep those who generally aren’t big on these types of games from having much reason to try this one out.

All in all, Dead Cells gets plenty of things right and does a very nice job of linking together two different philosophies to create an organic extension of them. Dead Cells gives fans of metroidvania and rogue-lite games what they will generally expect from this game, and even a bit more with slick combat and an extremely intuitive progression system. It honors the fans of both sides of its inspiration well by balancing the ideas from both in a way that makes Dead Cells feel like a very logical diversion of those games. It doesn’t go as far as it could have to rise above its contemporaries as a successor, but it does stand among them as a suitable addition with a bit of a twist.

Dead Cells brings tight action, excellent presentation, and metroid-vania tropes to the table in a way that feels surprisingly organic.

Repetitive level structure and an empty lore will keep this game from being much more than a flash in the pan for most.

Final Verdict:
GOOD
Without reinventing much, Dead Cells combines the best aspects of multiple genres seamlessly and effectively.
A copy of this game was provided by Developer/Publisher/Distributor/PR Agency for review purposes. Click here to know more about our Reviews Policy.