Here are the Dead Rising 2 achievements which comes out for the Xbox 360, Playstation 3 and PC on September 28th.  The trophies for Playstation 3 will presumable be the same listed below with your obviously added Platinum attain all trophies, trophy.  They mostly involve killing zombies of course with your occasional cocktail mixer among other various things.

– Pre-order at Gamestop for an in game Ninja suit with special moves. 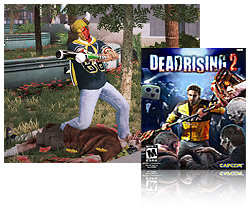 – Pre-order at Amazon or the Xbox 360 and get the new combo weapon, the ‘Super-Slicer’ and a rather interesting Avatar suit of Chuck Greene’s iconic yellow motocross jacket. For the Playstation 3 Amazon pre-order you get a ‘Dead Rising 2 Theme featuring Chuck Greene wielding his signature Paddle Saw on the zombie infested strip in Fortune City.’ Unfortunately, these pre-order bonuses seem to only apply to the Xbox 360 and Playstation 3 versions of the game and not the PC version.

The Collector’s Edition of the game will run you $79.99 and will include the following.