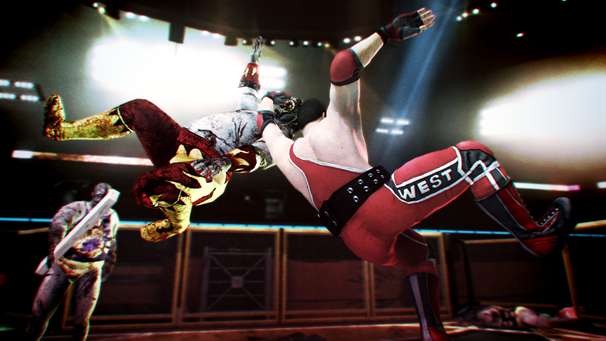 Despite a quick rise to fame after the Willamette outbreak in the original Dead Rising, Frank West is down on his luck and looking to reclaim his celebrity by competing in the zombie slaying game show “Terror is Reality.” After discovering a nefarious plan that releases zombies into Fortune City, Frank is on the scene to get the scoop and make a name for himself once again. Frank must make his way through the casinos, shops and eateries of Fortune City including the Uranus Zone, a new sci-fi themed Amusement Park with its own unique mini-games and ‘death trap’ rides.

New items littered throughout the environment help Frank fight his way through the crowds of zombies. Players can use one of the numerous maintenance rooms to combine the everyday items into weapons of mass zombie destruction. In addition to those taken from Dead Rising 2, combo weapons from Dead Rising 2: Case West and all-new ones are introduced to help kill zombies in even more humorous ways.  Tennis ball launchers and motor oil create flaming turrets, rubber alien masks and gems create a mask that shoots lasers, and Uranus Zone Escape Pods combined with fire extinguishers create Cryopods which when placed on a zombie hover in the air freezing zombies underneath. More than 10 new combo weapons have been added to the already robust list of unique and deadly weapons.

For the first time in the Dead Rising franchise, a new sandbox mode is available in Dead Rising 2: Off The Record, allowing players to explore Fortune City without the pressure of clock. Filled with unique and grisly challenges, Sandbox Mode helps players earn additional Prestige Points and cash for use in pawn shops and vending machines. Sandbox mode is available from the beginning of the game and can be played in both single-player and co-op modes.

Frank West never travels without his camera and Dead Rising 2: Off The Record is no exception. The camera returns allowing players to photograph the bizarre events happening in Fortune City and break the story of what’s happening from the inside. In addition to camera-based missions and challenges, players increase their Prestige Points by snapping pictures that fall into the categories of Brutality, Erotica, Horror, Drama and Outtake. Stickers placed throughout Fortune City also hint at objects and scenes that will offer additional Prestige Points and unlock new combo weapons when photographed.

Developed by Capcom Vancouver, Dead Rising 2: Off The Record has been enhanced to provide a more gratifying Dead Rising experience than ever before. Improvements include decreased loading times when travelling between environments and more frequent checkpoints placed at casino entrances. Frank West’s unique and original animations from Dead Risinghave been incorporated to give him the personality and swagger that fans have come to expect from the character.