Dead Rising 2: Off The Record Review

When Dead Rising 2 was released last year there were two glaring omissions that were bemoaned by fans: the original protagonist Frank West was nowhere to be seen and a sandbox mode was also missing. Thankfully, good old Capcom has rectified this and the result is Dead Rising 2: Off The Record (OTR). 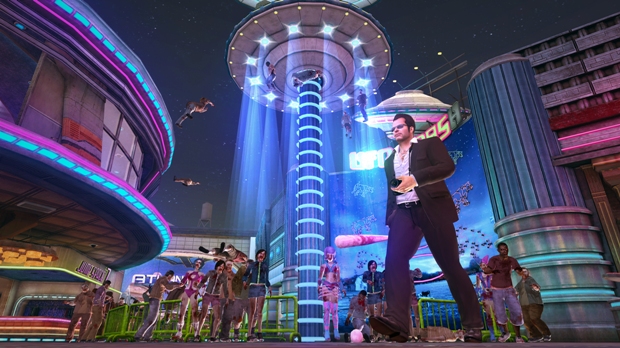 Frank’s back. He’s got his camera and he isn’t afraid to use it!

Just to clear this up, OTR is effectively Dead Rising 2 with a few tweaks here and there. Little has changed: the storyline is almost identical and the graphics are largely untouched – except for some shiny new cut scenes and notably, a new amusement park area… but that’s not to say there isn’t some fresh content in this release. With new psychopaths, challenges, and inventive weapons that can be spliced together, there’s plenty to keep you occupied should you decide to buy.

Dead Rising 2 saw former Motocross champ Chuck Greene replace photojournalist and fan favourite, Frank West, and while Chuck brought with him a new plot, some nous with modifying weapons and his annoyingly sickly daughter Katey, Frank was sorely missed. His rugged, no-fear, smart-ass attitude really added to the Willamette mall invasion of the first game and it just didn’t feel right without him. The fact that Frank would do pretty much anything to get his scoop was somewhat endearing; here was a guy with guile and balls, snapping away with his trusty camera in the face of adversity.  The original game achieved exactly what was captured all those years earlier by Romero in his classic Dawn of the Dead movie – a load of normal folk who had the run of a huge shopping mall and were fighting for their lives.

Thankfully, Frank’s back and OTR’s Fortune City is all the better for it. He’s let himself go a bit though and is a little wider around the waist. After living the high life following his exploits at that infamous mall, he’s decided to mosey on down to Nevada to relaunch himself by appearing in a leotard on TV show Terror Is Reality. Rather than Chuck’s bike riding, chainsaw-wielding opening, Frank’s TV segment sees him making use of a giant meat grinder and churning up any zombies that shuffle into his path. After taking the spoils and slipping into something more comfortable, he stumbles upon a conspiracy and all hell breaks lose… 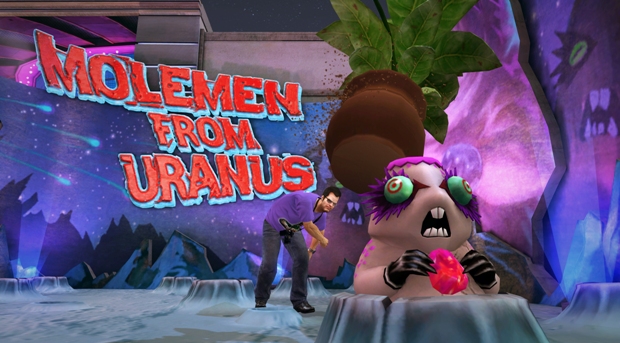 The all-new Uranus Zone is a nice addition

With zombies everywhere, Frank must wait for three days until the military arrive to help out. It’s no mean feat, particularly as Zombrex supplies are limited and Frank is infected! With trusty camera in hand, he’s ready to rack up those all important Prestige Points with snaps of horror, drama, erotica and brutality – all of which level up his abilities and make this survival more likely. Snapping a PP symbol that appears above the head of a survivor or zombie results in a hefty bonus so keep your eyes peeled.

Fortune City is much the same as it was, with a few enhancements including the theme park area, Uranus Zone, which offers a few nice attractions and cool opportunities to wipe out the undead horde.

As before, you can get Frank dressing up in women’s clothing, escape the undead on a child’s bicycle and explode, slash, decapitate and skewer to your heart’s content. The return of the camera works well and allows levelling up a little more quickly between missions. What’s more, Stacey’s phone calls won’t disturb your play as much as Otis’ in the first game as Frank has acquired a nice new Bluetooth headset, which is far more sensible when you’re trying to swing a nail-modifed baseball bat.

Checkpoints and save points (rest rooms) are plentiful and prevent un-necessary and slightly irritating repetition should you die. And it’s more than likely that you’ll be doing that quite often. Weapons still degrade quickly but there are plenty of items about that can be grabbed, bought or modified. 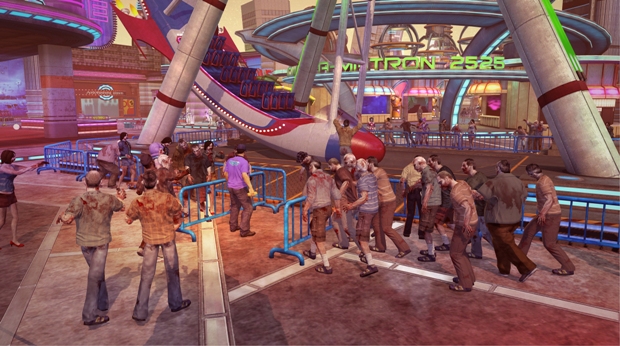 Should you tire of the story mode, this time us lucky gamers can dispense with that that pesky timer and instead jump headfirst into the all-new Sandbox mode either alone or with a friend. With no clock counting down but complete freedom, Capcom has remedied the biggest gripe of all. And it’s brilliant fun. Rather than missions, challenges are hidden about the map and can be activated, completed and retried time and time again with leaderboards encouraging you to improve your scores.

So the question remains, is it worth buying? There’s no denying it’s a great game and there are some great ideas. It’s not a full priced release, which is a bonus – so for those of you yet to experience Dead Rising 2, then the unequivocal answer is yes. For fans of the series and owners of the previous games, including the DLC where Frank makes an appearance anyhow, there is perhaps less incentive to part with your cash.

Sandbox mode is great but without a rigid mission structure, there’s little to keep you playing. By the time you’ve killed your 1000th zombie and completed the early challenges, you feel like you’ve seen pretty much everything and know what to expect.

Frank is a welcome addition to the main campaign and it works all the better for his presence but there’s no escaping the fact that the storyline is largely unchanged. If you’ve played and completed last year’s sequel, there’s little that’s fresh here. For owners of Dead Rising 2, you’ve seen most of it before but if you’re new to the series, then this is a worthwhile purchase.

Frank returns with his camera and trademark wit. You can still dress him up like a woman and make him ride a kid's bike... while killing zombies along the way

Owners of Dead Rising 2 will already know the story and the map inside out. There's not much new on offer

Final Verdict:
GOOD
It's Dead Rising 2 - but with Frank West from the original game! Oh, and there's a great new sandbox mode and co-op play thrown in for good measure
A copy of this game was provided by Developer/Publisher/Distributor/PR Agency for review purposes. Click here to know more about our Reviews Policy.