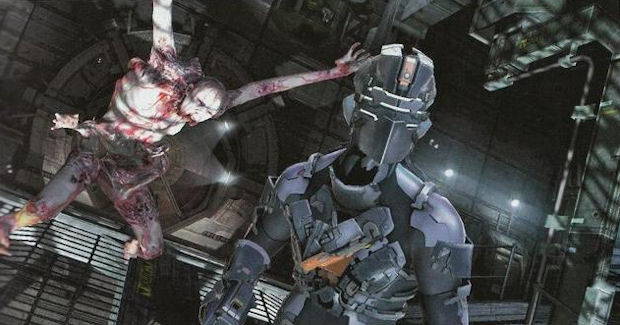 For those of you who didn’t get a chance to try the Dead Space 2 multiplayer beta which pretty damn cool and unique from anything else I have played online.  The demo that will be available for the Xbox 360 December 21st, the Playstation 3 December 22nd and everywhere else on December 25th will be a little different than the Beta was being that this new Demo will be your first taste of the single player in Dead Space 2. In the demo players will discover the Church of Unitology and defeat the Necromorph outbreak in a brutal battle against The Sprawl. Players will get to try out the new Javelin gun and use enhanced telekinesis ability as well as using a Jet equipped Space Suit to go into Zero Gravity Space.  Dead Space 2 will be out January 21st for the Xbox 360, Playstation 3 and PC.

Here is the full Press Release below:

In the Dead Space 2 demo, players will take engineer Isaac Clarke on a terrifying adventure through the Church of Unitology, an expectedly “safe” place that quickly becomes dangerous and deadly, during the Necromorph outbreak on the Sprawl. Players will also have access to a variety of new tools that Isaac can use to fight Necromorphs, including the new Javelin gun, updated stasis recharge mechanic and enhanced telekinesis ability. Players will also experience the advanced suit, equipped with jets that will allow Isaac full 3600 control in Zero-G space.

“The holidays are a great time to enjoy all forms of entertainment, and we can’t wait to give horror and action adventure gamers a taste of what awaits them in Dead Space 2,” said Steve Papoutsis, Executive Producer of the Dead Space franchise. “Releasing the demo five weeks before launch will not only re-connect players with our hero Isaac Clarke, but will also give them the opportunity to experience firsthand various jaw-dropping scenarios. It’s gonna be awesome”

Dead Space 2 pushes the limits of action, horror and terror. After mysteriously awaking in a sprawling, massive city anchored to one of Saturn’s moons, hero Isaac Clarke again finds himself thrust into the middle of a relentless Necromorph outbreak. Surrounded by the screeching cries of undead monsters and the haunting drum of echoing noises, Isaac plots a course through The Sprawl. Dead Space 2 is set to deliver a truly epic terror experience that will bring the psychological thrills of deep space to a terrifyingly new level.