Death Stranding is still an acquired taste, but on PC, it's more technically impressive than ever before.

NOTE: Given the fact that Death Stranding on PC is a largely similar to the game’s PS4 version in terms of mechanics and gameplay, our impressions of both versions have a lot in common. As such, this review will be a modified version of our Death Stranding review when it came out on the PS4 in 2019, which you can read through here. This review will, of course, discuss the additional features and options added to the game in its PC version.

Death Stranding has a huge emphasis on storytelling, which shouldn’t come as a surprise, considering the mind behind the game. Death Stranding’s story covers a lot, and it has a lot of things to say, and for the most part, it does it all pretty well. It’s a slow burn, with more things getting revealed to you gradually and on a constant basis, as pieces of the puzzle slowly and consistently fall into place. The game’s opening and closing five hours are a lot heavier on narrative and storytelling than the meaty chunk in the middle, but it never feels like it goes too long without anything eventful or interesting happening. Convincing voice acting and performances for all major characters across the board make it all that much easier to get invested in. The likes of Troy Baker and Tommie Earl Jenkins in particular really knock it out of the park with their roles.

The storytelling is not without its issues, though. Death Stranding’s very premise is predicated on the existence of some big mysteries. It follows, then, that how much satisfaction one will get from the game’s story will depend on how well those mysteries are answered. And though the game does a solid job of wrapping up most of the more small-scale and character-specific arcs, many of the larger questions are left unanswered. Some things are hinted at but never resolved, while many fundamentals about the state of the world are never even tackled. Hopefully, this is material that is being saved for a sequel, because a lot of these are questions that I was really excited to discover the answers to- answers that Death Stranding doesn’t give.

"Death Stranding’s story is a slow burn, with more things getting revealed to you gradually and on a constant basis, as pieces of the puzzle slowly and consistently fall into place."

Like the story, Death Stranding’s core gameplay loop is something else that follows a constant, gradual upward trajectory from beginning to end. It starts out fairly simplistic (and in the first few hours, even somewhat dull), but as you play more, and the mechanics are allowed to breathe and grow and become more fleshed out, the game really comes into its own. Death Stranding is, as I’ve mentioned, immensely focused on traversal, fittingly enough for the game’s central premise. Moving from location to location and making deliveries isn’t just the narrative context for your actions in the game, it very much defines what you’re actually doing in the game for the most part.

At first, walking and traversing terrain is all there is, but Death Stranding keeps throwing new elements and wrinkles into the mix to keep ramping things up. You regularly unlock new tools and equipment that you can use to aid you in traversal, and they’re usually inventive and effective, and have a tangible impact on the way you play. You can make bridges to cross over what would have once been dangerous streams with currents that would sweep you away, or use ziplines to quickly descend down mountain passes that would have taken you a long time to get around earlier, or equip mechanical exoskeletons to enhance your speed or your ability to traverse more treacherous terrain. And of course, the terrain you have to traverse also always keeps you on your toes- for instance, walking across plains is hugely different from climbing up mountains, which is hugely different from trudging through waist-deep snow.

Navigating terrain while making clever use of your equipment becomes a lot more complicated when you have to deal with BTs as well. These spectral beings aren’t the only foes you’ll run into in the game, but they’re certainly the deadliest- and in a stroke of horror genius, Death Stranding only lets you see BTs when you’re standing still. This means you have to stop moving, scan your environment, memorize where the BTs are, and then move around them based on that hazy estimation. Better still, you have to do it all very slowly, and while crouching, because making too much noise attracts BTs. It makes for some incredibly tense and thrilling moments, which, best of all, aren’t usually scripted. Without a doubt, encounters with BTs are the highlight of the entire game.

"At first, walking and traversing terrain is all there is, but Death Stranding keeps throwing new elements and wrinkles into the mix to keep ramping things up."

It’s worth noting that how much mileage one gets out Death Stranding’s freeform, thoughtful traversal-centric loop will vary. It’s something that can be construed as “boring” very easily. On paper, walking, micromanaging, and planning trips doesn’t sound terribly exciting, and it’s true that the immediate gameplay here isn’t the most action-packed and thrilling. If you’re looking for something with more immediacy and more consistent excitement, you might be disappointed with what’s on offer here. But in my experience, the mechanical depth of Death Stranding made up for its more plodding and deliberate tendencies. If it’s a walking simulator, at least it’s one that makes walking interesting.

If nothing else, the simple act of soaking in the desolate beauty of Death Stranding and its world is a treat in and of itself. This was a great looking game on the PS4, and now on PC, the Decima Engine has the full freedom to make the game look even prettier. The developers recommend an Intel Core i7-3770 or AMD Ryzen 5 1600, 8GB of memory, a GeForce GTX 1060 6 GB or AMD Radeon RX 590 graphics card. But you would need a better set up, if you are aiming for higher frame rates at higher resolutions.

Death Stranding at maxed out settings on the PC is an absolute looker. The ability to play the game at higher frame rates makes everything super smooth, which is especially important since you spend most of the time traveling and walking around. Character models look superb, but perhaps the biggest boost is given to the environments, thanks to impressive draw distance and better anti-aliasing solutions. As for the newly added content, there are Valve-specific side missions that will allow you to unlock Half-Life cosmetics. Then there is the photo mode, which, in a game like Death Stranding, is a must, and is as fun to mess about with as you’d expect. 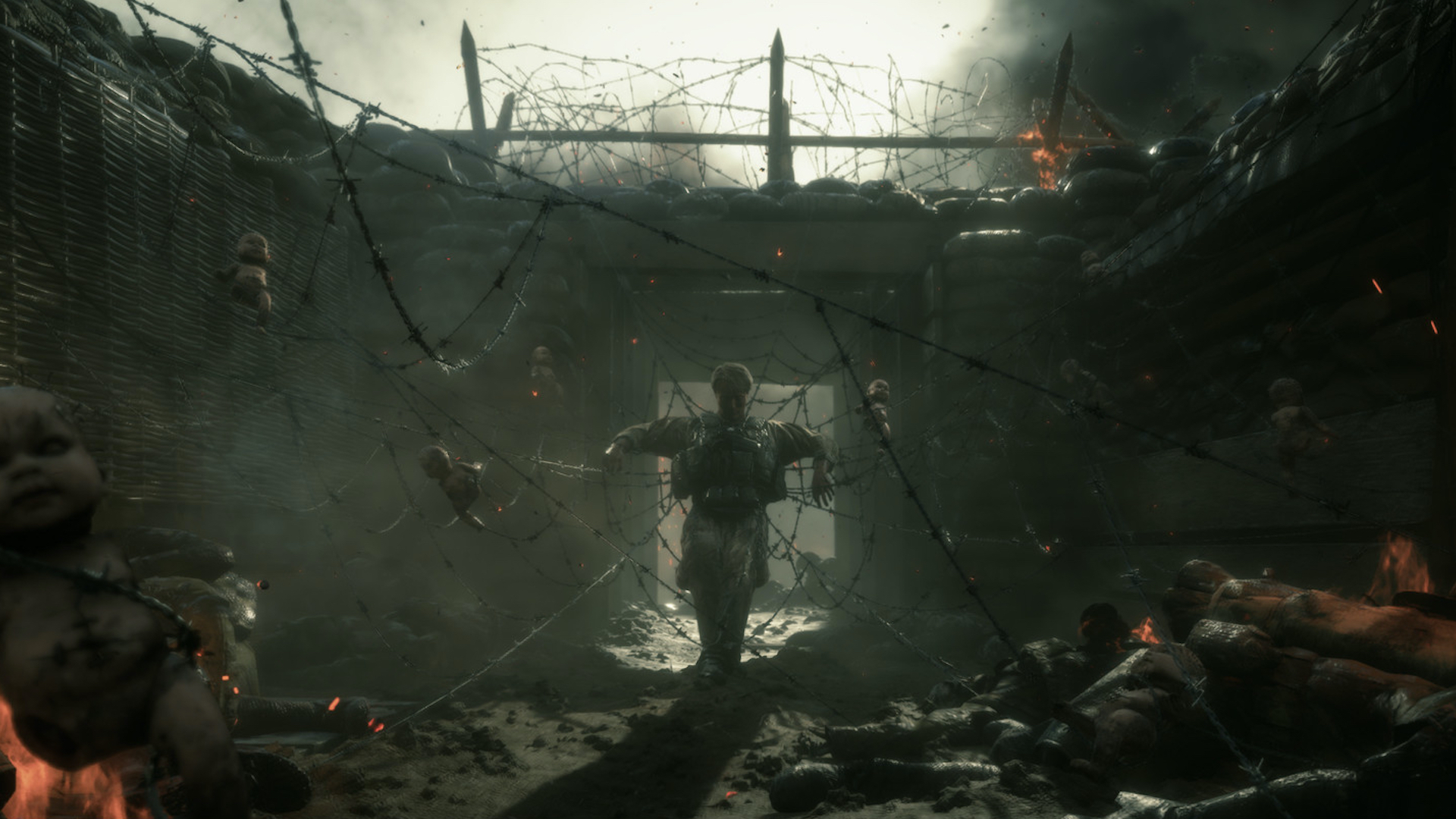 "Death Stranding at maxed out settings on the PC is an absolute looker."

There is quite a bit here that you can tweak here as well. You can change the model detail, memory for streaming, shadow resolution, ambient occlusion, screen space reflections, anti-aliasing, sharpness, depth of field, and motion blur, all along with support for DLSS 2.0. Performance is great overall, with the RTX 2080 delivering extremely high frame rates at 1080p. If you crank it up to 1440p or 4K resolutions, the frame rates will occasionally start dropping- but the game manages to run at a steady 60 FPS (by and large) regardless.

Another central mechanic in Death Stranding is its multiplayer elements – or the Social Strand System, as Kojima calls it. Every time you connect to any one of the cities or terminals you travel to, the game connects you to things other players have done in that area of the map as well, allowing you to see any structures or indirect messages they’ve left behind for you and others, which you can then use to make traversal easier for yourself. Meanwhile, you can also interact with each other’s structures in different ways, whether that’s contributing materials to improve bridges or even collectively creating entire highways, or donating materials and equipment that you might not need in a postbox for another player to make use of. It’s asynchronous multiplayer, somewhat in vein of what FromSoftware’s Souls series does, but dialled up to 11.

Just like its console counterpart, Death Stranding on PC is definitely an acquired taste. It has a very clear and specific vision in mind, a vision that might not be to everyone’s tastes, and it works toward that vision uncompromisingly, even in spite of knowing that that vision might not appeal to everyone. More than anything else, it sets up an exciting blueprint that can be taken to really exciting heights should Hideo Kojima ever choose to build on the foundations he’s laid down here.

Lots of graphics options; Visuals looks much sharper and performance is smooth and stable; Offers a unique but memorable gameplay experience.

Takes a while to get going; Story leaves questions unanswered.

Final Verdict:
AMAZING
Death Stranding's unique, meditative experience comes to PC, and the added technical enhancements have made it an even more impressive game.
A copy of this game was provided by Developer/Publisher/Distributor/PR Agency for review purposes. Click here to know more about our Reviews Policy.