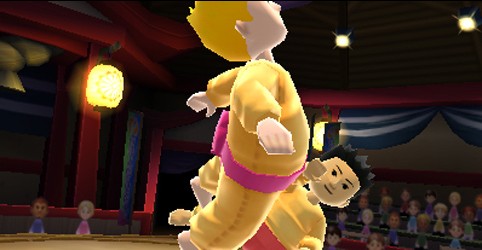 Players will kick, shoot, and bounce as they make their way  to the top of the leaderboards in 10 complete sporting events in 3D including Soccer, Tennis, Basketball, Ice Hockey, Bowling, Snowball Fight, Sumo Wrestling, Snowmobile Racing, Blowguns, and Trampoline. This all-new handheld version includes several features never seen before in a Deca Sports game, like power-ups, where players will have to collect enough Power Stones during each event allowing them to unleash powerful bonuses.

Some of the power-ups included in the game are a giant racket in tennis, a cannon dunk in basketball, and a rainbow shot in soccer. Players will also be able to unlock equipment in Champion Mode and customize their own team’s home court and training room in Customize Mode. With 4-player multi-player available through download play or wireless play, there is always an eager challenger waiting to take players on.

Deca Sports Extreme is rated E for Everyone by the ESRB and is available now for $39.99 on Nintendo 3DS.